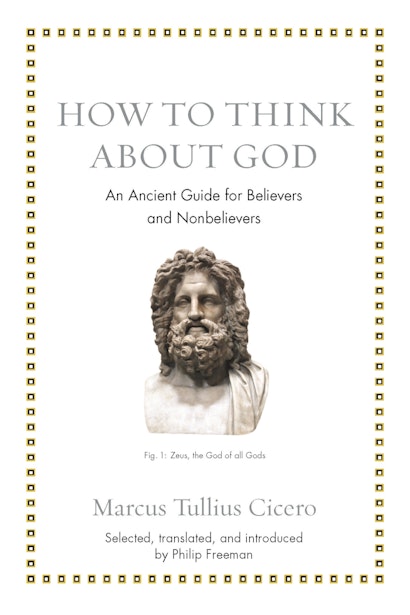 How to Think about God
Available in 2 editions
Buy This

Ancient Rome was a wildly diverse and exotic place. As I tell the students in my college classes, if you want to get a feel for what Rome was like, watch Star Wars. This holds true for Roman religion as well. The gods of ancient Rome were as varied as the aliens in the cantina at Mos Eisley.

Every Roman family honored the divine and mysterious Lares and Penates who watched over their household, as well as Vesta, the motherly goddess who cared for the sacred hearth fire at the center of the home. Beyond the doorway, guarded by the two-faced god Janus, were countless deities of field, stream, and forest. Unlike the Greek gods of Mount Olympus, these divine spirits rarely had statues or stories connected with them. They were instead forces of nature that animated every corner of the Roman world—and were ignored at one’s own peril. Aside from household and nature gods, there were also state cults devoted to divinities such as Jupiter, the lord of the heavens, and Bona Dea, the Good Goddess, worshipped only by women.

But as the Romans expanded across the Mediterranean, they met other gods and many new ideas. Foreign divinities were sometimes welcomed into the Roman pantheon, though often with great suspicion, especially those from the exotic East. Cybele, the great fertility goddess of Asia Minor, came to Rome during the war against Hannibal. Even the Jews, despite their peculiar notion of a single God, were usually allowed to worship freely in the city as long as they paid their taxes and caused no trouble.

From the beginning of Roman history there were atheists and sceptics, but it was the encounter with Greek philosophy that caused many educated Romans to question the religious traditions of their ancestors. Some were intrigued by Pythagoras and his teachings on reincarnation and a mathematical order to the universe. Others were drawn to Plato, who taught that there was an invisible world more real than our own and urged a rational quest for the good life. Many, like the Roman poet and philosopher Lucretius, found comfort in the doctrine of Epicurus who believed the supreme good in life was happiness, with no evidence of divine interest in humanity in a universe made only of atoms. But the most popular brand of Greek philosophy and religion among educated Romans in the years before the rise of Christianity was the Stoicism taught by Zeno and his followers, who believed that virtue was the supreme good in a materialistic and yet divine universe, ruled over by a connecting god or God—something very much like the Force of the Star Wars saga.

Marcus Tullius Cicero, Rome’s greatest politician, was among those Romans in the waning years of the Republic who searched for answers beyond the religion of his forefathers. He loved and honored the traditions of his homeland, but they failed to satisfy a deep longing to know about the role of gods in earthly life, how the universe was organized, and, perhaps most of all, whether the human spirit might survive death.

In 45 BC, the year before Julius Caesar was assassinated, Cicero wrote a number of important philosophical and rhetorical works including On the Nature of the Gods, in which several key figures from Roman history stage an imaginary debate the proper way to think about the divine. In this fascinating book, Velleius the Epicurean argues against the idea of gods having any interest in human affairs. Balbus, on the other hand, advocates the Stoic view of the universe.

A few years earlier in 51 BC, Cicero had imitated Plato in writing a book on the ideals of government. Called On the Republic, most of the text was lost to modern readers until 1820 when a large part of the book was discovered in the Vatican. Only the conclusion of the book, known as the Dream of Scipio, was preserved and studied continuously from antiquity through the Middle Ages and beyond. In this extraordinary dream narrative, the Roman hero Scipio is taken on a tour of the heavens by his adoptive grandfather Scipio Africanus. In this nighttime visitation, the younger Scipio discovers the Stoic heavenly design of the universe and the place of a virtuous soul in it.

Cicero was a man for any age. He was no religious dogmatist and was indeed a man full of doubts. His own beliefs, reflected in his many letters, changed repeatedly throughout his troubled life. But it was the Stoic view of the universe with its combination of materialism and spirituality—a view echoed so well in the teachings of the Jedi Knights of Star Wars—that made the most sense to him and offered him the greatest comfort.

Philip Freeman is the author of more than twenty books on the ancient world, including the Cicero translations How to Be a Friend, How to Grow Old, and How to Run a Country (all Princeton). He holds the Fletcher Jones Chair as a Professor of Humanities at Pepperdine University and lives in Malibu, California.