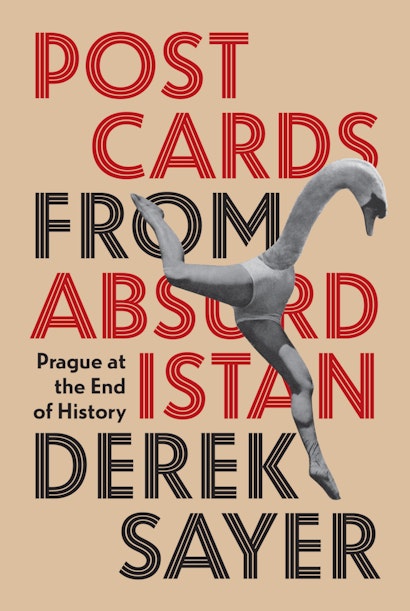 Postcards from Absurdistan
Available in 2 editions
Buy This

Interwar Prague was an avant-garde hotbed, but the first exhibition of Czech art to take place at New York’s Museum of Modern Art was not devoted to Czech modernism. War Caricatures by Hoffmeister and Peel opened on May 12, 1943. Adolf Hoffmeister and Antonín Pelc’s cartoons, MoMA proclaimed, “constitute a savagely brilliant attack on the Axis partners, principally the Nazis, impaling them on barbs of ridicule.” Four months later, Hans Krása’s children’s opera Brundibár, for which Hoffmeister wrote the libretto, began its run of fifty-five performances in the Terezín ghetto (Theresienstadt). “There was—each time—thunderous applause,” relates Ela Weissberger, who played the part of the cat. “When we were onstage, it was the only time we were allowed to remove our yellow stars.” The children’s last performance was on September 22, 1944, in front of an International Red Cross committee that inspected the camp and was fooled into giving it a clean bill of health. Their propaganda jobs done, Krása, set designer František Zelenka, and most of the Brundibár cast were deported to Auschwitz. Krása was murdered on arrival, along with his fellow-composers Pavel Haas and Viktor Ullman. Zelenka was gassed later with his wife and eight-year-old son. Weissberger was one of the few children to survive.

The Czech Wikipedia describes Adolf Hoffmeister as a “Czech writer, publicist, dramatist, painter, illustrator, scenographer, caricaturist, translator, diplomat, lawyer, professor, and traveler.” Ada, as his friends called him, was born in Prague on August 15, 1902. The son of a wealthy lawyer, he was a founder-member of Devětsil, the remarkable group of writers, artists, and architects who dominated Prague’s avant-garde scene in the 1920s. Later, he became a close collaborator of the Czechoslovak Surrealist Group. He worked with Voskovec and Werich’s celebrated Liberated Theater from 1927 until it was closed in November 1938. He co-organized Prague’s First International Exhibition of Caricatures and Humor in 1934, which drew angry protests from the German, Austrian, and Italian governments. He edited and contributed to numerous newspapers and magazines, for which he interviewed Tristan Tzara, Le Corbusier, André Gide, Paul Valéry, Jean Cocteau, George Grosz, and James Joyce, among many others. He was friends with G. K. Chesterton and George Bernard Shaw, Louis Aragon and Max Ernst, Vladimir Mayakovsky, Diego Rivera, John Steinbeck and John Dos Passos. “Hoffmeister belonged to the great generation of Czech avant-garde artists, he was the most cosmopolitan among them,” wrote Milan Kundera; “he was, so to speak, their foreign minister; and at the same time European culture’s ambassador to us.”

After Hitler’s troops occupied Bohemia and Moravia on March 15, 1939, Ada managed to slip away and make it to Paris, where he established a center for Czech émigrés. When World War II started, refugees came under suspicion—as refugees always seem to do. French police raided the House of Czechoslovak Culture on September 18, arresting twenty people. Hoffmeister and Pelc spent seven months in La Santé prison before charges of espionage were dropped, only to be interned in a series of camps for aliens. On June 20, 1940, the guards opened the gates of the Bassens camp and the Czechs found their way to Bayonne, where they boarded a coal boat bound for Casablanca. Ada finally reached New York in January 1941 by way of Lisbon, while Pelc arrived in May via Martinique. Pelc had crossed the Atlantic on an overcrowded old steamship, the Capitaine Paul-Lemerle, with André Breton, Victor Serge, Anna Seghers, Wifredo Lam, Germaine Krull, Claude Lévi-Strauss, and some 350 other refugees. Ada was joined in 1942 by his fiancée Lilly Rohne, a Jewish Sudeten-German actress he met in Prague while helping refugees after Britain and France handed the Sudetenland to Hitler in Munich in September 1938. Lilly had escaped to London in March 1939. Her five siblings perished in Terezín and Treblinka.

When the war ended, Václav Kopecký, the Communist Minister of Information in the new National Front government, urged Hoffmeister to return home. Ada and Lilly arrived in Prague on August 28, 1945. Though Hoffmeister had criticized Soviet cultural policy before the war, he now prudently joined the Communist Party of Czechoslovakia. Kopecký put him in charge of Czechoslovakia’s cultural activities abroad. After the Communist coup of February 1948, Foreign Minister Vladimír Clementis, who had shared Ada’s Parisian exile, appointed him ambassador to France. It must have taken considerable courage for Ada to take Vlado for a walk in Central Park when they were in New York on UN business in October 1949 and warn his old friend that his life was in danger—a warning Vlado “trivialized.” Clementis was executed on December 3, 1952, a victim of Czechoslovakia’s largest Stalinist show trial, along with former Communist Party general secretary Rudolf Slánský and other leading party and government functionaries. Only three of the fourteen defendants avoided the gallows. Ada was recalled from Paris in the spring of 1951 and fired from the diplomatic service. He escaped the purges, he later said, “by the skin of his teeth.” He was given a chair at Prague’s School of Decorative Arts and remained Czechoslovakia’s delegate to UNESCO and the International PEN Club, but thereafter he walked a dangerous tightrope.

One of an elite minority permitted to travel abroad, Ada dutifully represented the socialist camp, turning out caricatures of blood-red profits from the Korean War raining down on Wall Street. But at home he cautiously probed the boundaries of the possible. As early as January 1952 he questioned “the authoritarian, vulgarizing, and sectarian attitude” of “unscientific and un-concrete art criticism” that “lashes out with mere ideological programs and phrases.” His travelogue Chu-kuo (1954) innocently compares “the beautiful stones from the viewpoint of form” Chinese people place in their gardens with “sculptures by Hans Arp, Brancusi, Henry Moore, Alexander Calder, Giacometti, Lipchitz, or others”—artists whose “bourgeois formalism” was anathema to socialist realist orthodoxy, as Ada very well knew. The Artists’ Union chose Hoffmeister as its president in December 1964. He played a major part in the 1960s thaw, encouraging an explosion of modernist creativity (which was duly noted by the secret police). He threw in his lot with the reformers during the Prague Spring and paid the price after the Soviet invasion of August 1968: he was forced into retirement and was expelled from the Communist Party in July 1970. Thereafter, Ada was not allowed to lecture, publish, or exhibit. Appropriately, his last play, Pissoir (1973), was “an absurd farce about survival in a world tossed about by fighting.”

Hoffmeister died of a heart attack on July 24, 1973. His life was extraordinary, and yet it was thoroughly representative of Czechoslovakia’s twentieth century. Like countless other men and women—writers and politicians, architects and athletes, journalists and filmmakers, artists, musicians, and comedians—his story shows why Czech dissidents sardonically baptized their country Absurdistan. Biographies like Ada’s are why Prague provides a more revealing vantage point on the modern condition than the western capitals from which we are accustomed to look out, naively equating history with progress. Things look different when viewed from Central Europe. Prague’s modernity undermines easy distinctions between east and west, good and evil, right and wrong. Here, all choices come with costs, and the lines dividing collaboration and resistance, consent and dissent, dissolve into a blur of moral uncertainties. This is a landscape painted in infinite shades of gray. When authoritarianism is in the ascendant and democracy under global assault, we cannot afford to dismiss twentieth-century Czechoslovakia as a faraway country. Prague’s modern history should sound a warning to us all.

Derek Sayer is professor emeritus and a former Canada Research Chair at the University of Alberta. His other books include the award-winning Prague, Capital of the Twentieth Century: A Surrealist History and The Coasts of Bohemia: A Czech History (both Princeton).