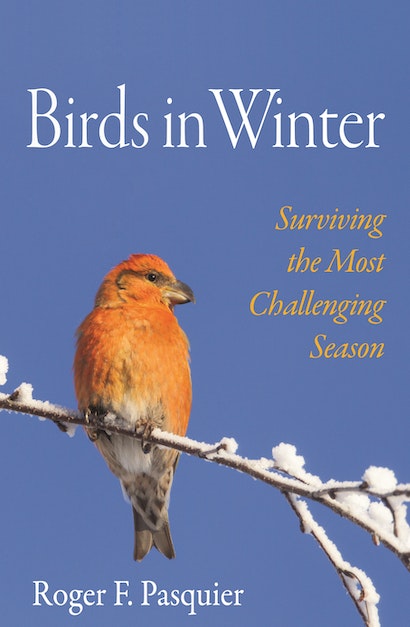 Birds in Winter
Available in 2 editions
Buy This

The recent report from the Cornell Lab of Ornithology and the National Audubon Society that there are today in the United States and Canada 29.4 billion fewer birds than the estimated 100 billion estimated as present fifty years ago is sobering news – but not surprising to anyone who has been birding for many years and seen the declines locally or when visiting distant birding hotspots.  Other regions of the globe have likely suffered similar losses.  When researching and writing the chapter on conservation in Birds in Winter, I was struck by how many of the causes of decline are in fact seasonal, some relating directly to situations birds encounter only in winter.  Any conservation plan must consider when and where in each bird species’ annual cycle it is most exposed to population threats.  Migratory birds, for example, may be at risk on their breeding ground, as they move toward wintering areas, when they arrive, and during their return.  Sedentary birds face the changing seasons in one place, which does not necessarily reduce pressure: over-winter survival of young non-migratory woodland songbirds is only half what it is for migratory species.

Thinking about how to present this subject, I concluded it was helpful to frame it in terms of the conservation priority sequence Edward O. Wilson has popularized, using the acronym HIPPO:

In the book, I could only give a few examples for each category as they occur in winter, and here will give only some general highlights.

Habitat loss is indeed the overwhelming cause of population decline, for both wintering and migratory birds.  Migrants, however, have likely suffered greater losses, because they depend on a succession of sites over the course of the year.  And, long-distance migrants to the tropics, have lost the most, because the area in which they winter is so much smaller than their breeding ranges.  This is especially so for North American songbirds that winter in the Caribbean, Mexico, Central America, and northern South America, a collective land mass about one-seventh the size of the breeding range of many species; the loss of an acre there is thus the equivalent of seven acres lost in the U.S. or Canada.

Invasive plants further contribute to habitat loss by overwhelming native vegetation on which birds depend, while invasive animals compete with or prey on birds.  Of all the invasive animals that kill birds during all seasons, the most pervasive and usually least considered is the domestic cat.  Studies of predation by housecats and feral ones estimate the annul toll as between 1.3 and 4.0 billion.  Reducing feral populations and keeping housecats indoors is probably the most effective way to cut into the 29.4 billion bird decline cited by the Cornell Lab and Audubon.

Pollution comes in many forms, including pesticides from agriculture, lethal chemicals from industry waste, and debris from individual consumption.  While some of the most dangerous pesticides like DDT are now controlled in the United States, they are still widely used at higher doses in tropical countries where so many North American birds winter.  Oil and other industrial runoff accumulate especially in wetlands, both coastal and interior, which are essential and irreplaceable wintering sites for waterfowl and shorebirds.  In the ocean, oil spills and dumping of debris also especially affect birds in winter, when many species are on the open sea far from the coasts where they breed.

On population, which of course is a driver of habitat loss and, in most poorly regulated parts of the world, increased pollution, I was particularly struck by how the increase in global affluence and leisure as well as sheer numbers affects birds in winter.  Birds that were once undisturbed on coastal beaches in warm latitudes now find them crowded all winter with vacationers, their dogs, and their off-road vehicles, while many mountain-dwelling species depend on the very same elevations developed for ski resorts.

Finally, overharvest of birds affects relatively few species, but some quite severely.  Seabirds in every ocean are caught and drowned in unsustainable numbers by long hooked fishing lines and gill nets that ocean factory ships let run for miles behind them; this is very much a winter problem, because then more seabirds are concentrated in the same regions used by fishing fleets.  Hunting of waterfowl in autumn and winter for sport and sustenance is well-regulated in the United States, but less so elsewhere.  Even in the United States, there is pressure to extend the season, which would badly affect the many species of ducks and geese that form pairs during winter for the following breeding season, because killing one member of a pair late in winter may prevent the survivor from finding a new mate for the year.

There are solutions and some success stories addressing each of these challenges to the survival of birds in winter – these will require another column!

Roger F. Pasquier, a lifelong birder, has had a career with the International Council for Bird Conservation, the Environmental Defense Fund, and the National Audubon Society, and is currently an associate in the Department of Ornithology at the American Museum of Natural History. His many books include Watching Birds and Masterpieces of Bird Art.