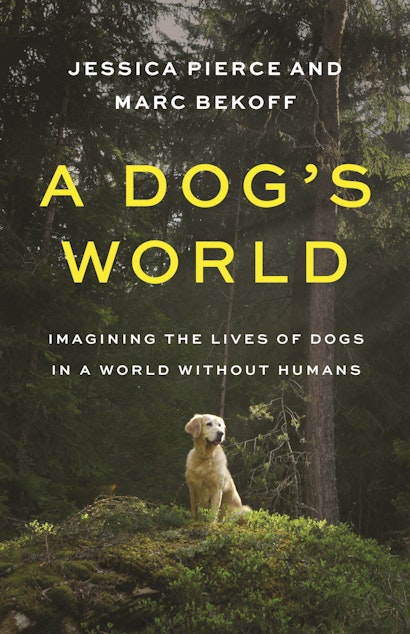 A Dog's World
Available in 2 editions
Buy This

As I write these words, Bella is napping on the floor next to my desk, curled into herself like a large hairy black bean. Every so often, following an inner cue that remains mysterious to me, she stretches out and arches onto her back, feet to the sky, exposing a soft white belly. After a few minutes in dead-bug pose, she flops onto her side and curls into her bean-shape once again.

I’ve known Bella for over a decade and during this time she has patiently accompanied me through the writing of several books and countless articles about dogs. She asks good questions and challenges me to think outside the box as much as is possible for someone stuck inside the body and mind of a human being. Of everything I’ve written about dogs over the years, my most recent book, A Dog’s World, is Bella’s favorite. She likes it because the book really does push outside the human box, taking readers into a dog-centered reality—a future in which humans are gone and dogs are left to their own devices.

What the book is about

In A Dog’s World: Imagining the Lives of Dogs in a World without People, my human co-author Marc Bekoff and I take readers into an imaginary future in which all people have suddenly disappeared, and dogs must survive on their own. We consider two key questions. First, could dogs survive without their human counterparts—are they still capable of living on their own, as wild animals, without help from and relationships with humans? Second, and of particularly keen interest to Bella, what are some of the possible evolutionary trajectories of posthuman dogs, as artificial selection is replaced by natural selection? Would dogs look or behave anything like the animals we now call our best friends? Our book is not only a flight of fancy, but also a serious thought experiment in speculative biology and one which can ultimately help us better understand who dogs really are.

Very briefly, here’s how Marc and I answered the two big questions of the book.

1. If humans disappeared tomorrow, about a billion dogs would be left on their own. These billion dogs occupy all corners of the globe, exploit diverse ecological niches, and live in a wide range of relationships with humans. Although many people when asked to picture a dog will think of a furry companion curled up on the couch by a human’s side or walking on the end of a leash, research suggests that fewer than 20% of the world’s dogs live as pets, or what we call in the book “intensively homed dogs.” The other 80% of the world’s dogs are free-ranging, an umbrella term that includes village, street, unconfined, community, and feral dogs. In other words, most of dogs on the planet are already living on their own, without direct human support within a homed environment.

Nevertheless, dogs would have to quickly solve the problem of how to find food because almost all dogs on the planet currently rely on human food subsidies, either in the form of direct feeding and hand-outs or in the form of garbage and waste. If humans disappeared—along with their garbage dumps, feces, and stores full of bagged dog kibble—dogs would quickly have to find other sources of food. Because dogs are behaviorally flexible, and because they are dietary generalists, they could likely survive on a wide range of edibles, from plants, berries, and insects to small mammals and birds and perhaps even some larger prey. Their meal plans would depend on where they live, their size, and their body shape.

After some rough years, dogs would adapt to life on their own. Dogs retain many of the traits and behaviors of their wild relatives such as wolves, coyotes, and jackals; they have not “forgotten” how to forage, hunt, find mates, raise children, get along in groups, and defend themselves. These skills would be put back to work. So, the answer to our first question—would dogs survive the abrupt loss of human beings—is almost certainly yes, assuming dogs are left with a planet that hasn’t become completely uninhabitable because of climate change.

2. An even more intriguing question is who dogs might become, once decoupled from humans.

This domestication process has strongly shaped the evolutionary trajectory of dogs up to this point. (It has also shaped the evolutionary trajectory of humans.) The phenotypic profile of dogs—their morphology, physiology, behavior—been deliberately shaped by humans through purposeful breeding. In a posthuman future, this dramatic experiment would continue, but the parameters would change. Dog would begin to drift in the currents of natural selection and where these currents would take them is one of the great unknowns.

As dogs become whoever they are going to become, they won’t go back to being wolves. When dogs lose contact with humans, they will first go through a process of feralization as they adapt to life on their own. Once all dogs have been free of human-directed selection for long enough that natural selection is acting on all the individuals in the group, they will become secondarily wild.

The ecological niches that posthuman dogs inhabit will be vastly different from the niches that their progenitors filled. The main and most consequential difference, as noted above, is that they will no longer have human food resources, the presence of which may have been one of the key ecological drivers of dog evolution. Many factors could influence posthuman dogs’ feeding strategies, including anatomical and physical constraints on what or who dogs can eat, the type of prey available in each location, the distribution of food resources within dogs’ home ranges or territories, seasonal variation in food resources, and competition with other animals. Different feeding strategies might evolve over time depending on ecological niche, local food availability, and competition with other animals. Dogs’ diets would, in turn, influence how they evolve over time.

The mating and reproductive strategies of posthuman dogs would likely not need to shift as dramatically as their feeding ecology. Nevertheless, there could be some interesting changes as natural selection favours strategies leading to greater breeding success in the absence of humans. These might include more prolonged and ritualised flirting, a reversion to one heat cycle a year rather than two, and greater involvement of mothers, fathers, aunts, uncles and other alloparents in the rearing and protection of youngsters.

What are Bella’s takeaway messages?

As Bella explained to me during various conversations about A Dog’s World, the real value of the thought experiment isn’t all the cool scientific information about the behavior and biology of dogs, but rather the practical fallout for Bella and me and for other dogs and their people. The most important effect of thinking about posthuman dogs and how they might flourish in the absence of us, for me, was a decentering of myself, and more generally of “the human.” Many of us think of dogs through the lens of what they mean to us, as our boon companions. But often the lives we ask them to live in our presence are a pale reflection of who they might be.

So, how can I help Bella live an experientially rich and interesting life now, a life that might compare in richness to the life she might live as a wild thing? I try to provide her the opportunity to engage in a wide range of species-typical behaviors. As I have learned about how their dogs experience the world—how, for example, Bella “sees” the world primarily through her nose—I look for ways to let her use her incredible olfactory capacities. Rather than trying to hurry through a walk, I let her linger over smells and let her have plenty of time off-leash to follow her own olfactory agenda. Learning about the lives of dogs on their own, I have begun to grasp the entire range of their canine possibilities and can understand how limited the four walls of my human home really are.

Jessica Pierce is a faculty affiliate at the Center for Bioethics and Humanities at the University of Colorado Anschutz Medical School. Her books include Run, Spot, Run: The Ethics of Keeping Pets. Website jessicapierce.net