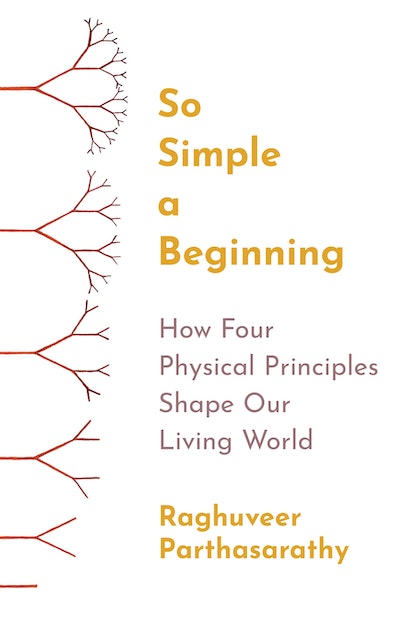 So Simple a Beginning
Available in 3 editions
Buy This

DNA is stuff: physical, tangible, material. We all know this; we can even picture in our minds its famous double helical form. Beyond shape, however, the nature of this physicality is less familiar, as are its consequences for how life works, and how biotechnologies can re-engineer life. When we think of a car, its rigidity, the heat of the engine, and the smooth motion of its wheels rolling on the road all form part of our understanding, without which we’d be hard pressed to make sense of how cars do what they do. What about DNA? Each of our cells contains two copies of our genome—the totality of our DNA—in a space a few millionths of a meter wide. Laid out in a line, our genome would be one meter long. This remarkable ratio of sizes, a factor of nearly a million, becomes still more impressive with the knowledge that as molecules go, DNA is quite stiff, rather like the plastic of milk jugs. Its containment in a tight space is therefore especially striking, and hints that our cells must actively package our genomes. And so they do: Our DNA is tightly wrapped around protein spools, then stacked and organized into fibers that bend and loop in ways that are still not well understood. The initial wrapping is made possible by another physical property of DNA, its strong, negative, electrical charge. The sides of the spools are positive, and so the universal physical truth that opposite charges attract pins DNA in place.

The negative charge of DNA influences functions both natural and unnatural. Many biotechnological techniques, including some methods for reading (“sequencing”) genomes, involve cutting DNA into fragments and separating them by length. The separation is achieved using electric fields to push these charged molecules through mesh-like gels, smaller ones snaking their way more rapidly through the gel’s pores. Electricity plays a role in writing as well as reading DNA. The famous gene editing tool CRISPR, a protein derived from the anti-viral defenses of bacteria, separates the strands of the double helix and holds one in a groove lined with positive charges as it cleaves DNA in two.

Connections between physical character and biological activity illuminate much more than the workings of DNA. They guide other molecules—proteins, for example, and the lipids that fashion themselves into cellular membranes—as well as larger structures: tissues, organs, and even whole organisms. These connections involve familiar concepts like stiffness, but also more abstract notions of information processing and randomness that arise in the study of all sorts of physical systems.

The idea that physical principles can help us understand the dazzling phenomena of the living world is the core tenet of biophysics, a sprawling, amorphous, and vibrant field. Biophysics remains, however, largely outside the popular consciousness. To bring it out of the shadows, I wrote So Simple A Beginning: How Four Physical Principles Shape Our Living World, aiming to convey the beauty of biophysics and its practical importance.

There isn’t a canonical set of biophysical laws to expound, but there are four physical themes that, to my mind, grant deep insights into how life works. One is the concept of self-assembly, that the instructions for putting pieces together are encoded in the pieces themselves. This is manifested across scales: two strands wind themselves into DNA’s double helix; cellular membranes shape themselves into two-dimensional liquids; organs organize themselves in ways we’re now learning to harness outside the context of bodies to create lab-grown organs. The second is the notion of regulatory circuits, that life’s building blocks can form decision-making, calculating machines, again at scales ranging from molecules to whole organisms. The circuitry encoded by DNA and the proteins with which it interacts, for example, can form switches, memories, and even clocks, regulating the activity or inactivity of genes. The third theme is that of predictable randomness, that life is underpinned by physical processes that are fundamentally random but nonetheless reliable. Molecules carrying chemical cues are jostled incessantly in a developing embryo; each path is unpredictable, but a cloud of thousands has features robust enough to direct the placement of wings on a fly or fingers on your hand. The fourth is the concept of scaling, that physical forces depend on size and shape in ways that determine form. A buffalo’s leg bones are not only thicker than a cat’s, but are disproportionately thick, girth being greater by a larger factor than length, a consequence of the ways in which gravity and mechanical strength depend on size.

The variety of life provides countless illustrations of these biophysical themes. Conversely, a biophysical perspective reveals a profound, hidden unity amid life’s diversity. The same sorts of circuit motifs govern genetic networks in the tiniest bacteria and the tallest trees. Every walker deals with gravity; every swimmer is faced with hydrodynamics. All this would suffice—a deeper appreciation of nature is rewarding in itself—but biophysics also intersects topics of health, disease, and even ethics. We now have stunning technologies for sequencing genomes—reading the pattern of chemical “letters” in DNA—made possible by clever use of DNA’s physical and chemical properties. Reading embryonic genomes is possible as well, raising questions of how, and whether, to make use of genetic information. We can now write genomes, using molecular tools that cut and paste swathes of DNA. These tools offer tantalizing possibilities for eliminating disease and discomfort but also raise questions of what changes to our genetic character we consider acceptable, and how to structure the intersection of biotechnology and society. It’s difficult, when reading about potential biotechnological futures, to discern what’s sense or nonsense, what’s easy or difficult, what’s possible or impossible. Understanding the physicality of life’s materials and processes, I claim, can help us all navigate these waters.

Raghuveer Parthasarathy is the Alec and Kay Keith Professor of Physics at the University of Oregon, where he is a member of the Institute of Molecular Biology and the Materials Science Institute. He lives in Eugene, Oregon. Website eighteenthelephant.com Twitter @RParthasarathy7