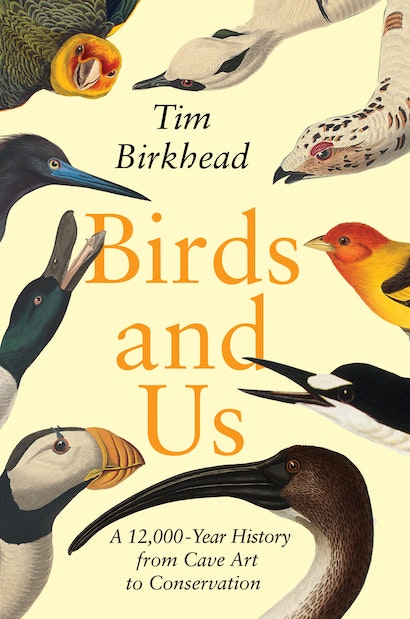 Birds and Us
Available in 3 editions
Buy This

Since the dawn of human history, birds have stirred our imagination, inspiring and challenging our ideas about science, faith, art, and philosophy. We have worshipped birds as gods, hunted them for sustenance, adorned ourselves with their feathers, studied their wings to engineer flight, and, more recently, attempted to protect them. In Birds and Us, award-winning writer and ornithologist Tim Birkhead takes us on a dazzling epic journey through our mutual history with birds, from the ibises mummified and deified by Ancient Egyptians to the Renaissance fascination with woodpecker anatomy—and from the Victorian obsession with egg collecting to today’s fight to save endangered species and restore their habitats.

What inspired you to write a history of our relationships with birds?

TB: I hated history at school, but once I became interested in how our ideas develop through time—in how we know what we know about birds—the past suddenly became very important. When I arrived at Oxford as a DPhil student in 1972, Niko Tinbergen’s ethological approach to bird behavior was still dominant.  Within just a couple of years of my PhD research, this was replaced by behavioural ecology—a completely fresh approach to the study of behavior. The essence of behavioural ecology is natural and sexual selection operating on individuals, as was set out by Richard Dawkins in his Selfish Gene in 1976. The individual selection approach to birds shaped my career, specifically with respect to sexual selection. As an undergraduate, I was intrigued to learn about promiscuity in dungflies, and I wondered whether similar behavior might occur in birds. Everyone said I was wasting my time—“don’t you know that most birds are monogamous?” But it turned out that while most birds are socially monogamous, most turned out to sexually promiscuous. I am intrigued by the way, as scientists, we change our minds but only in the light of new evidence or new conceptual frameworks. In the sixteen hundreds, my ornithological heroes John Ray and Francis Willughby, on noting the quail’s relatively huge testes, suggested that this meant that the quail was ‘a salacious [promiscuous] bird’. This is true, but it was only once we had the behavioural ecology framework that we understood that those structures evolved in response to sexual selection mediated by the promiscuity of female quail.

What is the main idea behind the book?

TB: I am fascinated by the different ways people relate to birds. Being a birder is just one way; being someone who feeds the pigeons in the park or the person that breeds finches in his backyard aviary are equally valid ways. Our relationships with birds have also changed markedly through time. Our earliest bird encounters are sometimes drawn upon the walls of Paleolithic and Neolithic caves and are usually associated with hunting birds for food or for some spiritual purpose. The latter is especially obvious in Ancient Egypt, where birds often appear exquisitely painted on the walls of tombs or as mummies in the catacombs. Throughout the ages, birds continued to be considered primarily as a source of food or, in the Victorian era, as scientific ‘material’. It was not until the beginning of the twentieth century that we began to develop a more empathetic relationship with birds, triggering interest in their ecology and behavior and, ultimately, their conservation. The point I wish to make is this: being aware that our relationships with birds have changed through time should make us appreciate how recent and fragile is our caring attitude to birds today.

Where did your interest in ornithology come from?

TB: I have been a birder since I was very young. I managed to turn my hobby into my career. As an academic, a professional ornithologist if you like, I have undertaken and enjoyed a substantial amount of undergraduate teaching and supervised 40 PhD students. The book is dedicated to all those students, partly because they made me think about how to convey what are sometimes complex concepts in straightforward language, but also because they questioned many of my assumptions. In that way, teaching fed into my research. An extension of undergraduate teaching is giving talks to the public about birds: this too has been wonderfully stimulating. At one meeting of bird-keepers, for example, I was told about an aspect of bullfinch Pyrrhula pyrrhula biology that I didn’t know about: that comment lead to an entire research programme. Academics are often viewed as dispassionate, yet, as I point out in the book, many of my academic colleagues have a close emotional bond with the birds they study. I have been fortunate to have studied a wide range of bird species (and ornithologists) across the world over five decades. My interests have spanned ecology, behavior, physiology, anatomy, genetics and conservation of birds both in the wild and in captivity.

This book seems to be part-memoir: how did this format help you convey your ideas?

TB: It is indeed, and not for egocentric reasons, but because I felt that writing about my undistinguished school career might encourage others to find a way to express themselves. I also wanted to emphasize the role of chance encounters with other ornithologists and birders, with books read, birds seen, places visited, all of which can help set the course of one’s career. One example: when I was about ten, my great uncle, a keen birdwatcher himself, gave me a loose-leaf notebook consisting of lined and plain paper to keep and illustrate my bird observations. It even had my initials printed in the cover! That simple, thoughtful gesture started my record-keeping, which was to prove so important both as a birder and later as a scientist. Luck or chance is also important, but—as Louis Pasteur said—chance favours only the prepared mind, so I discuss the different ways budding ornithologists might prepare their mind—by basically exposing themselves to every kind of ornithological experience.

In the final chapter of your book you discuss your fifty-year long study of guillemots (murres)—why fifty years?

TB: My PhD research on guillemots (murres) on Skomer Island, Wales, started in 1972, with the aim of understanding why their numbers had declined so much in the previous decades. A three-year PhD was insufficient to understand the population dynamics of a bird that can live forty or more years, so I kept going—2022 was my fiftieth field season on Skomer. Those five decades of watching and thinking about guillemots made me appreciate them, perhaps more than any other bird. What amazes me is that, after all this time, I’m still seeing things I haven’t seen before, and as time goes on, the challenges that bird populations face are changing too. The study’s original aim was to identify the cause of the decline and to understand how the population ‘worked’, but within a few years, my starting guillemot (murre) numbers on Skomer started to increase and have been increasing at 5% per annum ever since. We now know that this increase is the result primarily of a high survival rate (over 95%) of the adult birds. At many other guillemot (murre) colonies in the north-east Atlantic, however, climate change has had a devastating effect, and guillemot (murre) numbers have crashed. My main objective today on Skomer is to continue monitoring the population in the hope that neither climate change, bird flu nor any other threat ends up damaging the population. Monitoring provides the ammunition conservation biologists need to help protect species.

What are the main messages you’d like readers to take away from your book?

TB: There are several. The first is that one can have an exciting and fulfilling career studying birds. The second is that simultaneously maintaining both a narrow and a broad outlook helps, as a researcher, to ‘push the envelope’ and make discoveries. Thirdly, writing for or talking to the public about birds can also stimulate new research and foster new findings. Fourthly, all this effort is ultimately directed as saving birds. Birds matter. Understanding the remarkable biology of birds and recognising that our current conservation-oriented attitude to birds is relatively recent should, I hope, help us preserve them.

Tim Birkhead is emeritus professor of behaviour and evolution at the University of Sheffield. His research on promiscuity and sperm competition in birds helped to re-shape our understanding of bird mating systems. Tim has been president of the International Society for Behavioural Ecology and the Association for the Study of Animal Behaviour. He has studied guillemots—mainly on Skomer Island—for 50 years. As well as a passion for research, Tim is committed to the public understanding of science as has written several popular science books, including Promiscuity (2000), The Wisdom of Birds (2008), Bird Sense (2012) The Most Perfect Thing: the Inside (and Outside) of a Birds’ Egg (2016). His book: Birds and Us was published in 2022. He is married and has three children and a dog, enjoys walking, playing guitar and painting in his spare time.