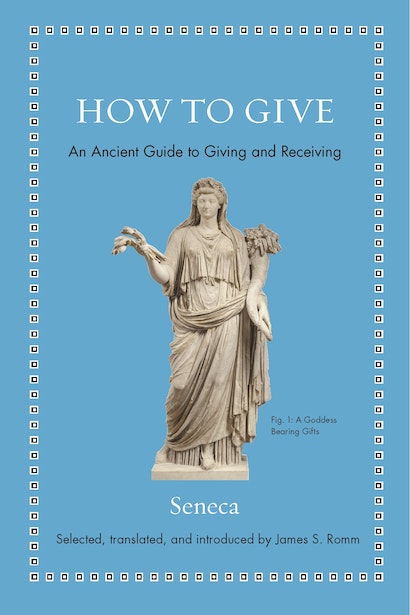 How to Give
Available in 2 editions
Buy This

The approach of the winter holidays invites us to wrestle once again with the complexities of giving. On surface it seems simple enough: Buy something nice, wrap it in colorful paper, present it to your giftee. But we’ve all been party, on one end of the process or the other, to giving gone wrong. Perhaps we sensed a hidden agenda behind the gift, or had one ourselves. Perhaps we sensed there were strings, rather than ribbons, attached.

The Greco-Roman world was intensely interested in giving and gift exchange, beginning from its earliest surviving texts. Homer’s Iliad is set in motion when Achilles, the greatest Greek hero fighting at Troy, receives prizes of war that are less than his prowess deserves, and is forced to surrender one particular prize—the concubine Briseis—to an arrogant ‘boss,’ King Agamemnon. In his wounded pride Achilles sits out a series of battles in which his fellow Greeks suffer terrible losses. Yet after his return to battle and defeat of the Trojan champion, Hector, Achilles becomes a supremely generous giver—doling out prizes galore from his personal store, to the victors in a set of athletic contests. The contrast Homer draws is unmistakable: Noble giving defines Achilles’ lofty nature, while small-minded Agamemnon uses gifts to manipulate and control.

For later Greeks, gift-giving was often tied up with notions of reciprocity and obligation. The Greek word “gifts,” dôra, also translates “bribes,” since it was assumed that the giver expected a return. Even the gods took part in this transactional model, as illustrated in Herodotus’s tales of the wealthy King Croesus of Lydia. Croesus heaped gold offerings on the god Apollo at his oracular shrine in Delphi, hoping for a guarantee of victory in his war against the Persians. The oracle promised him that “a great empire will fall,” but the war results in the fall of Croesus, not his Persian foe. An irate Croesus demands to know why Apollo treated him so poorly after receiving such rich gifts. The oracle’s response blames Croesus for not asking which empire would fall, but also reveals that, in return for the gold, Apollo had put off Croesus’s defeat three years past the fated time. In effect, Croesus had bought himself a postponement.

King Croesus believed that generous giving could keep him in power, a line of thinking later extended in imperial Rome. The Julio-Claudian emperors invented the congiarium, a “gallon-sized” gift of cash to each Roman, and later the donativum, a lump-sum bequest to the Praetorian soldiers who bolstered their rule. Nero made extravagant use of both tools, and a coin he issued around 64 AD commemorates his lavish congiarium by showing the emperor himself presiding over the distribution of coins. In theaters and sports arenas, Nero’s agents tossed out tokens to the crowds that could later be redeemed for gifts as large as whole houses. Conquered lands were bled dry, and estates of political enemies plundered, to subsidize such largesse.

The philosopher Seneca was a witness to Nero’s depredations and also, to his discredit, a beneficiary of them. He served as Nero’s chief minister for more than 10 years in the mid-1st century AD, during which time he also wrote many of the Stoic moral treatises he is known for today. In the longest of these, On Benefits—which I excerpted and translated as How to Give in Princeton’s Ancient Wisdom for Modern Readers series—Seneca reveals his discomfort with Neronian giving, and charts a very different course, one that takes the gods themselves as model.

“If someone were to give you a few acres, you’d say you’d received a gift,” Seneca muses. “Yet you refuse to call a gift the vast expanse of the earth’s lands, stretching out far and wide?…If a house should be given to you”—perhaps here Seneca thought of the houses Nero gave away to random theater-goers—“gleaming with marble, its ceiling shining with gold or spangled with colors, you’ll call it no ordinary favor. Yet god has built for you a huge dwelling…and a ceiling that glitters differently by day and by night – then do you deny that you’ve received a favor?”

For Seneca, who was composing a study of cosmology and earth science (the Natural Questions) at the same time as On Benefits, the beauty of the universe is the ultimate gift, bestowed by the divine without expectation of return. The world around us reminds us constantly of what true generosity looks like. We too can give as the gods do, non-transactionally.

As Nero greased palms and bought favors all around him, Seneca imagined a way to bestow gifts and reap no return but joy. Perhaps amid the joylessness of our current political moment, his thoughts can still enrich our holidays.

James Romm is the editor and translator of Seneca’s How to Keep Your Cool and How to Die (both Princeton) and the author of Dying Every Day: Seneca at the Court of Nero. He has written for the Wall Street Journal, the New York Review of Books, and the London Review of Books, among other publications. He is the James H. Ottaway Jr. Professor of Classics at Bard College and lives in Barrytown, New York.