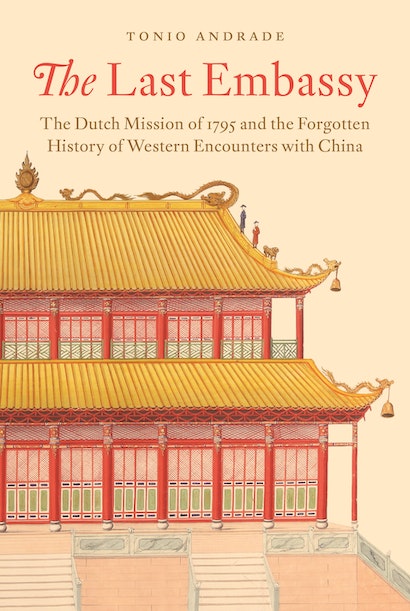 The Last Embassy
Available in 2 editions
Buy This

George Macartney’s disastrous 1793 mission to China plays a central role in the prevailing narrative of modern Sino-European relations. Summarily dismissed by the Qing court, Macartney failed in nearly all of his objectives, perhaps setting the stage for the Opium Wars of the nineteenth century and the mistrust that still marks the relationship today. But not all European encounters with China were disastrous. The Last Embassy tells the story of the Dutch mission of 1795, bringing to light a dramatic but little-known episode that transforms our understanding of the history of China and the West.

Why should I care about two years in the eighteenth century?

TA: My father asked me this question, and I was tempted to respond with a question focusing on one of the articles he himself wrote during his career as a material scientist: Why should anyone care about Adsorption of Human Lysozyme and Adsorbate Enzyme-Activity as Quantified by Means of Total Internal-Reflection Fluorescence, I-125 Labeling and ESCA? But actually, his question is a good one. And my answer is that this particular two-year mission helps us revise some deep-seated, false ideas about Sino-European relations.

TA: Many people have argued that Chinese and Europeans had trouble getting along in the pre-modern period because there was some fundamental incompatibility between China’s and Europe’s diplomatic systems. On the European side, countries were supposedly organized into a sort of anarchic space of de jure equal states, with balances of power forming organically that led to equilibria. This system, sometimes known as the Westphalian System, was seen by most westerners as somehow natural, a default mode of international relations. On the Chinese side, in contrast, states were organized in a hierarchy, usually with China at the top, and other, smaller countries, arranged around it. In this “Eastphalian” system, smaller states were supposed to pay ritual obeiscance to China, which is why this system is sometimes called the “Tribute System” or the “Sinocentric System.” Supposedly these two systems had trouble interfacing, and many scholars have referred to diplomatic interactions between westerners and people in China as a “Clash of Cultures.” Supposedly this “clash” helped lead to the many wars the Qing dynasty fought with western powers during the nineteenth century, such as The Opium War, the Arrow War, the Sino-French War, and the Boxer Rebellion. The Dutch Embassy of 1794–95 helps challenge this view.

How does Last Embassy challenge this view?

TA: Well, the Dutch Embassy has been overshadowed by a British embassy to China that took place two years previously, in 1792–73, and that—

Quick question: the British didn’t have a permanent embassy in China at the time?

TA: No, good question! East Asian states—like most states throughout the world—didn’t have permanent embassies at all. State-to-state interactions (and we really might better call them court-to-court interactions) took place via specific embassies. For instance, the Korean court would send embassies to the Qing court each year, at New Year’s for example. After their meetings and ceremonies were finished, the ambassadors and their staff and retinues would return to Korea. So neither the British nor any other western power had permanent diplomatic representation in any East Asian capital. (The Russians are a partial exception, because there was a Russian house in Beijing, although to call it an embassy is rather a stretch.)

TA: Yes, it was led by Lord George Macartney, and it had the goal of opening up direct communication between the British and Qing governments. In fact, one of its goals was to install a permanent British ambassador in Beijing. This goal wasn’t reached. Nor were any of the other goals, and the Macartney Mission went down as a failure. Macartney’s visit was cut short and he was sent back home with little more to show for his efforts than a couple letters to King George III, letters that he and other Britons found dismissive and belittling. Macartney and his companions felt stung by their failure and blamed their failure on the supposed arrogance of the Qing court. This is the origin of the culture clash narrative.

I take it the Dutch mission went more smoothly?

TA: Yes! Far more smoothly. The leaders of the Dutch expedition—Isaac Titsingh and Andreas Everardus van Braam Houckgeest—understood and accepted that East Asian diplomacy had its own customs. They were both highly experienced in East Asia. Titsingh loved Japan, where he’d lived. He spoke and read Japanese and had devoted a great deal of effort to learning Chinese writing. Van Braam loved China, thought that the Chinese had a great deal to teach westerners, and he was an avid collector of Chinese art and artifacts. So whereas Macartney and his companions balked at Chinese customs and made demands that Qing officials found outrageous, Titsingh and Van Braam behaved with humility and understanding. They were fêted and given unprecedented access, exploring parts of the Forbidden City and the Yuanming Gardens that appear never to have been penetrated by previous westerners. They both felt, with justification, that they’d achieved a triumph.

So the Dutch mission is worth reading about because it contrasts with the British mission?

TA: Yes, we need some balance. British missions to China—and the British experience in China more generally—has dominated the literature on premodern Sino-European diplomatic interactions. The Dutch mission shows that the situation was more nuanced. If there was a culture clash, it was between Britain and the Qing rather than China and the West more generally.

But the book’s also a narrative history, an immersive story of a difficult voyage through a fascinating land during a time of tremendous change. It uses the ambassadors’ difficult voyage to open a window onto the Chinese landscape and people, onto the Qing court, and onto the rituals and celebrations of that court, particularly the festive New Year’s festivities. It was fascinating for me to experience this world through the rich sources—Qing, Korean, Dutch, French, Spanish—and I wanted to try to provide a sense of immersion and narrative to the reader.

Tonio Andrade is professor of Chinese and global history at Emory University. His books include The Gunpowder Age: China, Military Innovation, and the Rise of the West in World History (Princeton), Lost Colony: The Untold Story of China’s First Great Victory over the West (Princeton), and How Taiwan Became Chinese: Dutch, Spanish, and Han Colonization in the Seventeenth Century. He lives in Decatur, Georgia.