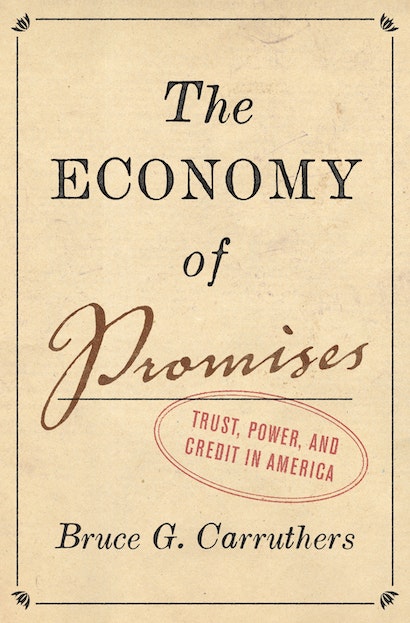 The Economy of Promises
Available in 2 editions
Buy This

US politics faces a serious trust deficit. MAGA Republicans don’t trust RINOs, leftist Democrats don’t trust their centrist colleagues, Republicans don’t trust Democrats (and vice versa), and trust in major social institutions has been weakening for decades. And this skepticism has spread outside of partisan politics: according NORC’s General Social Survey, the proportion of respondents who said “you can’t be too careful in dealing with people” rose from 50.3% in 1972 to 63.9% in 2018. How can society function with growing distrust?

And yet, we should recognize that beneath the political contention, Twitter rages, hyperbolic rhetoric and angry posturing, a big part of American society routinely finds many individuals and organizations to be very trustworthy. Despite serious imperfections, the economy depends critically on the credit system and on the systematic ability of lenders to answer the question: whom to trust? Without credit, the modern economy would grind to a halt. And the extension of credit involves a decision by a lender to trust a borrower. Lenders offer money in exchange for a promise to repay in the future. Depending on the kind of credit, that future can be decades away. How to judge such promises? Whose promises are credible?

Early in the nineteenth century, people mostly used their social networks, personal connections, and assessments of character to decide whom to trust. They loaned money to their family, friends, neighbors, and business acquaintances. They judged an individual’s “moral fiber” to see if they were trustworthy, or they sought information about a person’s reputation. It always helped to be an abstemious churchgoer. This informal procedure worked well enough when commerce was largely local. For long-distance trade (in commodities like cotton, sugar and tobacco), participants were especially reliant on their existing social and business networks. But starting in the middle of the nineteenth century, a new system developed that made it possible to lend to strangers, to deal with people in parts of the country outside the reach of personal networks or acquaintanceship, and to extend credit on a much greater scale. This new system emerged first in short-term trade credit (from suppliers to their business customers), but it created a template that eventually spread around the world.

Lewis Tappan established the Mercantile Agency in 1841, selling information about business customers to New York City suppliers who extended trade credit. The idea was to provide useful information about potential customers so that suppliers could know who was most likely to pay their bills. Increasingly, suppliers were dealing with customers they didn’t know and who were based in distant parts of the country. Reliance on social connections and personal reputations could no longer suffice. Tappan created a national network of secret correspondents (often attorneys) to supply confidential information about local businesses: who were they, what did they sell, how were they doing, and so on. Such information was usually qualitative, of uncertain provenance, and its reliability was highly variable. Nonetheless, it was turned into credit reports and scores that Tappan sold to his subscribers. Such was the demand for systematic credit information that rival rating agencies, like Bradstreet’s, soon appeared, and Tappan’s own firm grew in size and scope (eventually becoming R.G. Dun). By the end of the century, Dun was rating well over 1 million firms and had branch offices in every major US city, issuing fat reference books four times a year that gave a summary rating for firms in any given city or region. Dun’s customers could look up a firm and find a precise categorization of its “pecuniary strength” or “general credit.” Subscribers included anyone selling to business customers, but also banks, insurance companies, and others concerned with what we today call “risk management.” And those whose businesses were rated knew that the ratings mattered and that their access to credit depended on those ratings.

The idea to summarize creditworthiness in a single measure proved so popular that it spread to long-term debt. In 1909, John Moody started to publish his own reference book containing thousands of bond ratings—first for railroads and then for utilities, industrial firms, and even sovereign governments. His canonical rating scale, with “Aaa” at the top, is still recognized globally. The appetite for information among investors encouraged others to create ratings, and soon the bond rating industry was dominated by Moody’s, Standard & Poor’s, and Fitch. They later played a key role in the complex sub-prime securitizations that led up to the global financial crisis of 2008.

Individuals didn’t escape the reach of ratings, either. Starting in the 1950s, Fair, Isaac and Co. developed the FICO score, which summarizes the creditworthiness of an individual consumer in a single number. These are now ubiquitous and routinely govern access to credit, employment, insurance, housing, and other opportunities (including online dating). Many people know their own credit scores and are advised on how to manage (or “repair”) them. Today, fintech firms celebrate the ostensible neutrality of algorithms and work to exploit the potential of “big data” to augment traditional credit scores with improved measures of creditworthiness, justifying their efforts under the banner of “financial inclusion.”

Ratings, scores, and numerical indicators undergird the modern US credit economy. With little regulatory oversight, they depend on a pervasive informational infrastructure that gathers, collates, and stores vast quantities of information about debtors, operating on a scale that Lewis Tappan could not have imagined. They measure, in the context of credit, the trustworthiness of borrowers, whether individual or organizational, private or public. The US economy could not function without credit, and yet we also know that its allocation has been—and remains—a problem. Discriminatory treatment in credit markets on the basis of gender and race, for example, made it harder for women and minorities to obtain home mortgages and credit cards on an equal basis. Racial discrimination in particular helped create the residential segregation that so powerfully shaped American society. Despite passage of several federal laws in the 1960s and 1970s, patterns of unequal access persist. And even with numerous state usury laws to protect small borrowers from predatory lenders, these rules are so easily evaded that many become burdened with crushing debts and can only escape through bankruptcy.

Social inequities continue to trouble the contemporary credit system, as do credit bubbles and credit crunches, but nevertheless the system functions well enough to ensure the operation of a market economy built on promises. In marked contrast to national politics, participants in the credit system are not deeply divided by systematic partisan mistrust. Creditworthy Republicans and Democrats alike can borrow, and individuals with low credit scores, regardless of their politics, face high interest rates or denial of their loan applications. Yet this success should not be taken for granted, for it is hard to know what new biases, inequities, hidden fault lines, and unknown vulnerabilities lie buried within the complex, layered and often overlooked system of scores and ratings. As credit scores get plugged into computer algorithms, as more online data are exploited, and as credit ratings are utilized in “off-label” ways, such possibilities become even more concerning. Well-considered policy will be necessary if the promise of our “economy of promises” is to be fully realized.

Bruce G. Carruthers is the John D. MacArthur Professor of Sociology at Northwestern University. He is the author of City of Capital: Politics and Markets in the English Financial Revolution (Princeton) and the coauthor of, among other books, Money and Credit: A Sociological Approach and Bankrupt: Global Lawmaking and Systemic Financial Crisis.