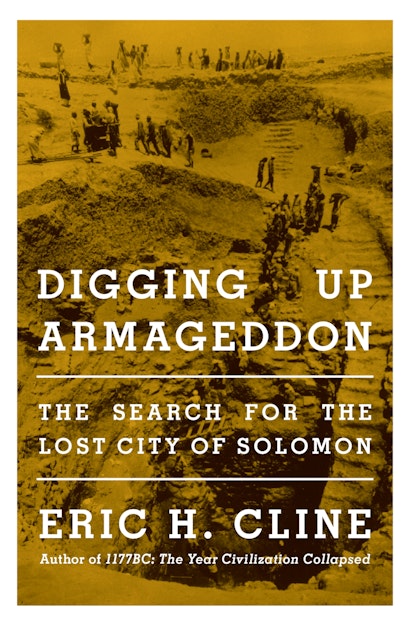 Digging Up Armageddon
Available in 4 editions
Buy This

Each day throughout the year, the tour buses begin arriving at Megiddo soon after 9:00 a.m., disgorging fifty tourists at a time. By the time the site closes at 5:00 p.m., several dozen buses will have deposited hundreds of visitors. “Welcome to Armageddon,” the tour guides say, as they march their flocks up the steep incline and through the ancient city gate. Reciting their practiced patter as they go, they reach the first stopping point. The group members catch their breath and, frequently, burst into hymns or prayers, especially if they are on their way to Nazareth, located almost directly across the valley.

Our small group of archaeologists smile tolerantly, having been at the site since before dawn. Wielding pickaxes, trowels, and dustpans, filling buckets and wheelbarrows full of freshly excavated dirt, we play our game of guessing the nationality of each group from fifty yards away, as they come around the last corner of the incline before heading past our excavation area. From the nearby Northern Observation Platform, they gaze up the length of the Jezreel Valley on one side and down into the depths of the Chicago excavation trench on the other. Attached to the chain-link fence, which only rarely deters tourists from coming into the excavation area, is our sign that jokingly reads, “Please do not feed the archaeologists.” We may not get their nationalities right, but that doesn’t stop us from hoping that they might have some extra cookies.

Megiddo is mentioned a dozen times in the Hebrew Bible, and in a multitude of other ancient texts, but it is especially well-known as the setting in the New Testament for the penultimate battle between the forces of good and the forces of evil. We are told in Revelation 16:16 that the two opposing armies will assemble “at the place that in Hebrew is called Armageddon.”1

In fact, the very word Armageddon comes from Har Megiddo—Hebrew for the “mound” or “mountain” (har) of Megiddo. By the Middle Ages, multiple nationalities, languages, and centuries had added an n and dropped the h, transforming Har Megiddo to Harmageddon and thence to Armageddon.2

There have actually been numerous Armageddons at the ancient site of Megiddo already, as one civilization, group, or political entity gave way to another over the millennia—one world ending and another beginning—from the Canaanites to the Israelites, and then the Neo-Assyrians, Neo-Babylonians, Persians, Greeks, and Romans, followed in turn by the Muslims, crusaders, Mongols, Mamlukes, Ottomans, and, most recently, World War I and the 1948 Israeli War of Independence.3 However, it is the New Testament’s Armageddon that is the most famous and which is responsible for attracting the tourists.

The ancient mound once stood more than one hundred feet (thirty-six meters) above the surrounding fields, at its highest point in the north. A visitor to the site in 1904 was surprised at just how high it was. Instead of the low mound that he expected to see, he found instead “a proper hill that dominates the plain.” The Chicago archaeologists reduced its height by removing the topmost occupation layers, but even so it still towers over the Jezreel Valley today, easily more than seventy feet high and readily visible from a great distance.4

Early photographs show the mound in its pristine state, as yet untouched by the excavators’ shovels and picks and without all of the huge spoil heaps of excavated earth that now litter the area. Taken from the north, they show the mound rising majestically in the distance. From this side, two distinct levels can be discerned: a lower level with a perfectly horizontal terrace about halfway up the mound, upon which Gottlieb Schumacher, the first excavator, said he found the remains of a fortification wall protecting the city; and a slightly smaller upper level that sits directly on top of this lower level, like a second story on a house or the upper layer of a cake.5

Within the mound itself, we now know, are the remains of at least twenty ancient cities, built one on top of another over the course of nearly five thousand years, from about 5000 BCE to just before 300 BCE. The various excavators have given a Roman numeral to each one, I–XX, numbering them sequentially. Stratum I, at the very top, is the most recent, dating to the Persian period. Stratum XX, located just above the native bedrock, is the oldest settlement, dating to the Neolithic period. The strata in between date to the Copper, Bronze, and Iron Ages, including the time of the Canaanites and the Israelites.

It isn’t easy for us to get to the site by 5:00 a.m. every day. We need to, though, in order to get in an eight-hour workday before it gets too hot. The alarm clocks are set to go off very early at the kibbutz where we are staying; by the ungodly hour of 4:35 a.m., we are packed into several large buses and a small fleet of cars—though a fleet of small cars is perhaps a more apt description. There are nearly 120 of us, counting both the professional archaeologists and graduate students who make up the staff plus the volunteer team members who have come from all walks of life—doctors, lawyers, nurses, accountants, schoolteachers, students, and others—for a “once in a lifetime” experience.

The staff members, all of whom have been working with us at Megiddo for several seasons, are in the cars for the most part, though some are with the volunteers in the buses, reclining in air-conditioned comfort even at this early hour and desperately trying to grab a few last minutes of sleep. I am usually behind the wheel of a Mazda 3, or a shalosh, as we affectionately call it, a type of car that most Israelis also seem to drive, though I don’t use the horn nearly as much as the rest of them do. It was originally dark blue when I first picked it up in Tel Aviv, but now it is a solid brown, thanks to the layer of dirt that coats every inch of the outside. I mentally remind myself to take it through a car wash before returning it to the rental company at the end of the dig season, but I’ll probably forget to do so and have to throw myself on their mercy, as has happened several times in the past. Israel Finkelstein, codirector of the dig and probably the best-known archaeologist working in Israel today, is in the passenger seat, as he is most days. I concentrate on driving safely as we speed through the darkness.

We reach Megiddo some twenty-five minutes later and leave our cars in the parking lot next to the Visitor Welcome Center, which was converted from what remained of the original Chicago dig house, first built during the mid-1920s. It now features a restaurant, bathrooms, a few gift shops, and two rooms presenting a brief history of the excavations, complete with a model of the ancient site that has moving parts if you push the right buttons.

We begin walking up the ancient mound, lugging our digging tools, water jugs, and other supplies, clutched in both hands or carried on our backs. Our sleep-deprived brains barely register the fact that beneath our feet are layers of remains stretching back through human history.

Passing through the Late Bronze Age city gate, which dates back to before the time of the heretic Egyptian pharaoh Akhenaten in the fourteenth century BCE, we proceed along the tourist path and eventually reach the top of the mound. Dotted with palm trees, the surface is covered by a tangle of ancient ruins as far as the eye can see. Here the team members split into groups, each heading to their different excavation areas.

After quickly raising the poles that support the black shades covering each area to protect us from the sun, we have a few minutes to relax. Sipping cups of coffee and munching on breakfast bars, we watch the sun rise from behind Mount Tabor and burn the early morning mist off the floor of the Jezreel Valley. The dawn temperature is already seventy degrees Fahrenheit. The mosquitoes are biting, for the light wind is not enough to disperse them, but it is a temporary annoyance. They will soon disappear as the temperature rockets into the nineties and beyond over the course of the next few hours. By the time we leave in the early afternoon, the site feels like an oven. It’s not hard to imagine that we are indeed working at Armageddon, even though it is only June. And we are lucky. The real heat will come in August. Nobody, not even archaeologists, is crazy enough to dig then.

2. The earliest versions of the New Testament had a rough breathing at the beginning of the word, manifested as an “H” sound, so that it was originally pronounced “Harmageddon.” But the rough breathing is merely represented in Greek writing by what looks like an apostrophe (thus ‘Armageddon), and over time and much recopying, that little initial sign was lost, so that we now simply say “Armageddon.”

3. For detailed discussions of the battles that have been fought at Megiddo or in the Jezreel Valley during the past four thousand years, see Cline 2000. See now also overview article of the battles and recent excavations at Megiddo by Weintraub 2015.