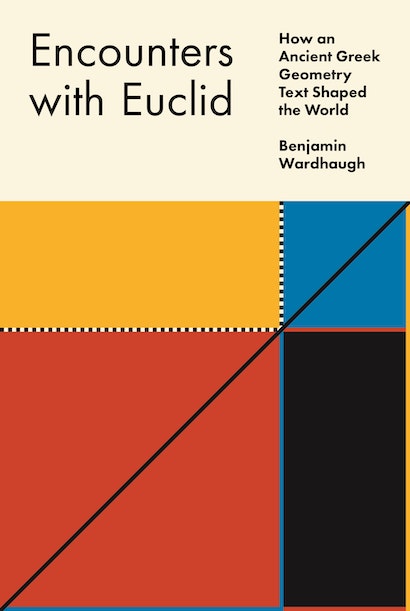 Encounters with Euclid
Available in 2 editions
Buy This

Euclid of Alexandria: mathematician, author of the Elements of Geometry. Utterer of apocryphal quips including the famous put-down to Ptolemy I: ‘there is no royal road to geometry’. Who was he? What did he look like?

Real biographical details are scarce: little more than the isolated fact that his students were still around in Alexandria in the mid-third century, at the time of the later geometer Apollonius. Thus we don’t know if he was an Alexandrian born or an immigrant (like Ptolemy) from somewhere else in the Greek world. We certainly don’t know what he looked like. But that hasn’t stopped people trying. The fame of his book has meant that the man and his life are a magnet for reinterpretation depending on what you think geometry is and where you think it fits into culture.

Figure 1 shows a typical picture from the Renaissance. It shows Euclid in the classic geometer’s pose, with a pair of dividers or compasses, leaning down to draw a nice big diagram for students to see. This was a long-lived tradition of how geometers were supposed to look: there was a medieval version in which personified Geometry herself wielded the dividers for the benefit of sometimes diminutive students. There is a later tradition in which geometers and mathematicians generally are shown in much the same pose: from the probable Archimedes in Raphael’s ‘School of Athens’ [Figure 1a] to Paolozzi’s massive statue of Isaac Newton placed outside the British Library in London in 1995 [Figure 1b]. A famous version is William Blake’s vision of Urizen wielding the ‘golden compasses’ to impose mathematical laws on an unwilling world [Figure 1c]. The pose emphasises the physical—sometimes uncomfortable—process of drawing and displaying geometrical diagrams, and the fact that geometry was something to be performed in front of an audience (the compasses are often massive).

There are other ways, though. If geometry was in origin ‘geo-metry’, measuring the earth, there’s a sense—that has never left it—that the real use of geometry is in practical life: surveying fields, designing buildings, theorising about the physical world.

Here’s a Euclid from the middle ages, with a different set of instruments and a different pose. Euclid (and it is clearly labelled as he) sights the moon and stars along a stick, holding in his left hand a sphere or circle on a stick, probably meant for some sort of globe. He is seated and robed. His companion holds out an astrolabe to him; the label says Hermann and it is almost certainly meant to be Hermann the lame, author of a treatise on the astrolabe as well as the hymns Alma Redemptoris Mater and Salve Regina. Other pictures for this and later periods associate Euclid with the instruments of surveying, architecture or carpentry.

At the other end of the scale, a strand in ancient and early modern philosophy thought of geometry as an important link between the world of appearances and the sublime: a tool for directing the mind away from the world and towards the eternal. Geometry was studied in the Platonic school for that very reason, and thinkers down to the renaissance and into the 18th and 19th centuries continued to promote its study as a way to purify the mind and inculcate right reasoning.

Here’s a Euclid who seems to be more philosopher than anything else, in the classic pose of the ‘thinker’ and reading a book, not making a diagram. Quite a different idea of who Euclid was, and it’s the result of centuries of conflating Euclid the geometer with his near-contemporary Euclid of Megara, a philosopher who knew Socrates. It was in this context that the legend gained currency about Plato writing over his door ‘no-one ignorant of geometry enter’. There was an Arabic version of his life in which the inscription actually read ‘no-one ignorant of the Elements…’.

Finally though, all idols fall, and the 19th and 20th centuries busied themselves taking down the reputations of great authors and great thinkers. After Lobachevski and Einstein, Euclid’s geometry was no longer the best available description of actual space; after new work on the manuscripts in the 19th century Euclid’s original text seemed more and more a matter of conjecture; and a strand of 19th-century thought argued that the excessive study of geometry didn’t improve the mind so much as make you antisocial and even mentally ill. By the 20th century, then, Euclid seemed like nothing so much as the perpetrator of a long-lived trick. And in that context Max Ernst displayed his famous ‘portrait’ of Euclid.

The face is a blank mask, for a figure whose biography is totally unknown (is there even anyone behind it at all? Some suggested ‘Euclid’ was the name of a team). The clothes are those of a woman, evoking a Greek story in which the other Euclid crept into Athens in disguise to hear Socrates teach. The geometrical shapes of the background are distorted in the manner of non-Euclidean space: and they leak into the foreground figure too. Nothing is stable here, and any interpretation is provisional.

Euclid’s Elements had a life as long as any textbook in any subject, and his reputation is far from dead: though it’s fair to say the modern world has problematized it a bit. If Euclid now seems an elusive figure, perhaps it was always so, since it has always been possible to see him and his book several ways: as author, as philosopher, as hero of practical life.

Benjamin Wardhaugh is a historian of mathematics. He is the author of Gunpowder and Geometry: The Life of Charles Hutton, Pit Boy, Mathematician, and Scientific Rebel and How to Read Historical Mathematics (Princeton) and the editor of A Wealth of Numbers: An Anthology of 500 Years of Popular Mathematics Writing (Princeton). He lives in Oxford, England.