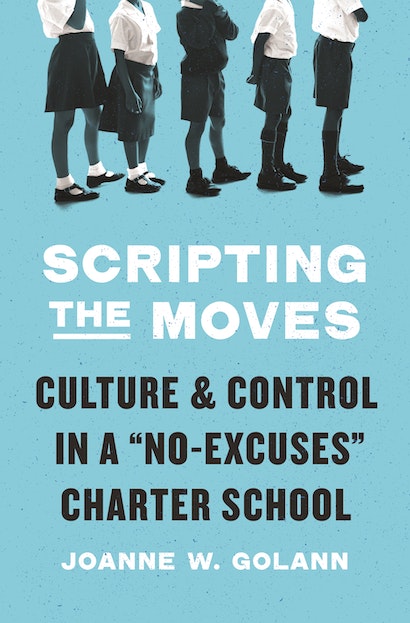 Scripting the Moves
Available in 2 editions
Buy This

This past year has forced schools to make significant changes to their practices. It has also prompted teachers and administrators to reimagine education and to rearticulate a new vision for their schools—as I’ve seen at “no excuses” charter schools, which I have spent the last decade studying and observing.

In March, Noble, the largest charter network in Chicago, apologized to its alumni for its “assimilationist, patriarchal, white supremacist and anti-black” discipline practices. Last June, Achievement First promised not to “be hyper-focused on students’ body positioning,” and ended its requirement for students to sit with their hands folded at their desks. KIPP, the nation’s largest charter school network, retired its founding motto, “Work hard. Be nice,” explaining that it “ignores the significant effort required to dismantle systemic racism, places value on being compliant and submissive, supports the illusion of meritocracy, and does not align with our vision of students being free to create the future they want.” (KIPP began plans to change the motto in 2019.)*

If the dual pandemics of the coronavirus and systemic racism have spurred these schools to speak out, what they are recognizing is not “woke nonsense.” As a sociologist of education who spent 1 1/2 years inside a no-excuses school eight years ago, I found that students, parents and teachers clearly understood the deeply problematic underpinning of the no-excuses model. The findings in my new book echo the three points articulated in KIPP’s statement. No-excuses schools like the one I studied often demand compliance and promote a meritocratic myth while failing to empower low-income Black and Latinx students to make their own decisions.

Being “compliant and submissive.” No-excuses schools “sweat the small stuff.” At the school I studied, this meant that a student could be disciplined for resting their head on a desk, talking in the hallway or humming. One mother I interviewed kept her daughter home for two weeks because her child felt overwhelmed from the pressure to make no mistakes. Even teachers worried that their discipline practices were too stringent and played into the stereotype of Black and brown bodies as threatening and “out of control”—a stereotype that, as we’ve seen all too clearly, has deadly consequences.

Loosening tight controls to give students more voice and autonomy is not a death knell for school culture but can deepen learning. As the sociologists Jal Mehta and Sarah Fine have shown, deeper learning occurs when students have larger blocks of open time and more agency over their activities. Instead of worrying about how they are sitting or where their eyes are tracking, students can direct their energies toward learning and discovery.

The “illusion of meritocracy.” Meritocracy is an ideal that is ingrained in the American ethos. Don’t we want to encourage hard work? Isn’t meritocracy fair? Yes, but such a focus downplays the profound ways that race and social class shape opportunity. In teaching students to work hard, earn their way and show grit, the school sought to motivate students to push through to success. But telling students to make “no excuses” obscures the reality of their lives and fails to address the roots of misbehavior, such as trauma, and the reasons for missed homework, like the need to juggle school, work and family responsibilities.

Instead of attempting to fix unequal opportunity by telling students to make no excuses for failing to abide by a school’s rigid expectations, what if we told schools to make no excuses? (This is, in fact, the original idea behind the no-excuses philosophy.) What would that look like? It might look like wraparound supports, experienced teachers, school psychologists, mentoring groups, tutoring and individualized attention. Students from marginalized communities often need more resources and support to overcome obstacles. What they don’t need is to be told to work hard and be nice.

A failure to promote a “vision of students being free to create the future they want.” Education as liberation is not a new idea. Education scholars have long recognized the liberating potential of education to teach students to think critically about existing social structures and to equip them with tools to dismantle them. More recently, scholars like Bettina Love have urged educators to fight with the urgency and imagination of past and present abolitionists to liberate students, not to force them to conform to systems designed for someone else’s benefit.

Instead of giving marginalized students rigid scripts to follow, we need to equip them with the tools they need to construct the world they deserve. Tight structures limit students’ opportunities to develop skills like how to express an opinion, advocate a position and make independent decisions. These are the types of tools students will need to fight and dismantle systemic racism.

Instead of giving marginalized students rigid scripts to follow, we need to equip them with the tools they need to construct the world they deserve.

The string of recent apologies by prominent charter networks suggest that no-excuses schools are looking in the right direction. It will take work to get there. Critical changes will include the effort to cultivate student voices and establish a process for feedback; the need to recruit, develop and sustain teachers; and the willingness to engage in race-conscious practices.

For too long, policymakers have stood by no-excuses charters because of their academic results, including impressive high school graduation and college attendance rates. But it is not enough to get students to the college door — especially when many of these students are not making it to the other side. If we want to create truly equitable schools, we need to look beyond test scores and achievement gaps and commit to creating spaces that support, affirm and humanize all students. It is too costly not to do so.

Joanne W. Golann is an assistant professor of Public Policy and Education at Peabody College, Vanderbilt University. She is author of the new book, Scripting the Moves: Culture and Control in a ‘No-Excuses’ Charter School.

This story was produced by The Hechinger Report, a nonprofit, independent news organization focused on inequality and innovation in education.