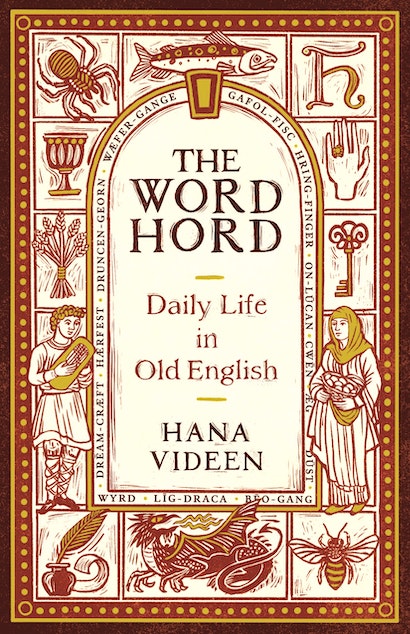 The Wordhord
Available in 3 editions
Buy This

I took an Old English module on a whim during my first year at university. I came across it at a foreign language informational session, and having never seen or heard Old English before, I was astonished to learn that my own mother tongue could be considered ‘foreign’ to me. Old English is the vernacular language spoken and written during Britain’s early medieval period, from around 550 to 1150. Somehow in the midst of grammar drills and the painstaking parsing of Beowulf line by line, I fell in love with this dead language. I discovered that I could learn so much about a distant era from even a single word.

Take gafol-fisc (pronounced GA-voll-FISH), for instance. Its literal translation is ‘tax-fish’. Today we are familiar with both taxes and fish… but what is tax-fish? Gafol-fisc appears in an eleventh-century charter detailing the gifts to be granted by King Cnut to the Abbey of Bury St Edmunds. The fish that the king wished to give to the abbey was gafol-fisc, fish collected as tax or tribute from the maritime district. Gafol-fisc is not a common word, appearing only in this particular charter, but its existence tells us something about life in eleventh century England. People could pay their taxes in fish. If you do some more digging through Old English charters, you’ll come across other means of payment: gafol-bere (tax-barley), gafol-wydu (tax-lumber) and ealu-gafol (ale-tax).

Old English has words that don’t exist any more like gafol-fisc, and modern English, of course, has many words that Old English lacks. But these are not always obvious modern words like airplane and television. For example, Old English doesn’t have a word meaning ‘nature’, something that people undoubtedly experienced in the early medieval period, perhaps a great deal more so than we do today. Many of us live in cities and have to travel to parks or even out of town to witness ‘nature’—plants and animal life, things not human or human-made. Middle English ‘nātūr’ doesn’t appear until the thirteenth century. Old English ge-cynd (yeh-KUEND) is sometimes translated as ‘nature’, but this word actually refers to one’s condition or kind, (‘human nature’ for instance), not the wilderness kind of nature we think of today. Perhaps the division between what we think of as nature and not nature was less significant for speakers of Old English. Early medieval poems and sermons instead refer to sceaft (creation, pronounced SHEH-oft), which included human beings, plants, animals, mountains, and even entities we’d call ‘supernatural’ (dragons, elves, monsters).

Sometimes it’s not whether or not a concept exists that sets Old English speakers apart from us moderns but the sheer number of words for a particular concept. You’re left thinking that a thousand years ago some subjects must have been far more complex in their layers of meaning. Modern English has the words ‘blood’ and ‘gore’, for instance, but Old English has blōd, swāt, drēor, heolfor and sāwel-drēor. Blōd (pronounced BLOAD) is the most prosaic of these, with the others found mostly in poetry. Sāwel-drēor (SAH-well-DRAY-or) literally means ‘soul-blood’, perhaps because the soul was thought to be located in the blood, or because blood was in some other way connected to the soul. An Old English poem about Judgement Day uses blōd, drēor and swāt in the space of three lines, leaving the modern English translator scrambling to find enough synonyms.

Similarly, Old English has many more words for ‘ocean’ than modern English with its limited stockpile of synonyms (the sea, the deep…?). In Old English there’s sǣ (from which we get ‘sea’) but also holm, brim, secg, mere and wæter-scipe, as well as poetic compounds like ȳð-lād (wave-path), brim-lād (sea-path), lagu-fæðm (sea-embrace), hwæl-weg (whale-way) and segl-rād (sail-road). Today we have so many different words for different types of roads (street, avenue, lane, boulevard, highway, freeway, etc.), so it’s really not surprising that people in early medieval England would also have an extensive vocabulary for their main ‘road’.

What I love the most about Old English is stumbling upon words that are now obsolete but that still resonate strongly in my own life. These include ūht-cearu (care that comes early in the morning) and ān-genga (‘one-goer’, the perfect word for someone who’s a bit of a loner). But my favourite word in Old English is wordhord. Appearing only seven times in extant Old English literature, wordhord is literally ‘word-hoard’, a hoard or stockpile of words. In the early medieval period, stories were often passed on through speaking and singing rather than writing. A storyteller in a mead-hall would need a well-stocked hoard of words to draw upon in order to weave a tale from memory. A wordhord wasn’t a physical object like a dictionary but a metaphor for the store of words and phrases a poet kept in their mind, ready to use when practicing their craft.

Obviously a word like wordhord tells us something about the experience of storytelling more than a millennium ago, but it’s also surprisingly relevant. I wrote my book to be a wordhord of sorts. Over the years many Old English words have found a place in my personal hoard, words that have brought me joy and bewilderment, surprise and confusion. There’s even a word to describe the emotion that comes from collecting and treasuring whatever is most precious to you—hord-wynn (hoard-joy).

Not all the words in The Wordhord are strange or mysterious. Some haven’t changed a bit (like word). Words that have endured reveal what has remained significant over time, and obsolete words tell us about concepts and ideas that are foreign to the modern world. Each chapter in The Wordhord explores a different aspect of daily life in Old English, from our basic needs (like eating and drinking) to our loftiest pursuits (like religion and life goals).

My book won’t teach you Old English grammar. You won’t walk away being able to read Beowulf in the original. But I hope you’ll discover some of the hord-wynn that can be found when exploring the secret histories of words, stories about the language you thought you knew.

Hana Videen has been hoarding Old English words since 2013, when she began tweeting one a day. Now more 20,000 people follow these gems from her wordhord. A writer and blogger, she holds a PhD in Old English from King’s College London and lives in Toronto. Website oldenglishwordhord.com  Twitter @OEWordhord