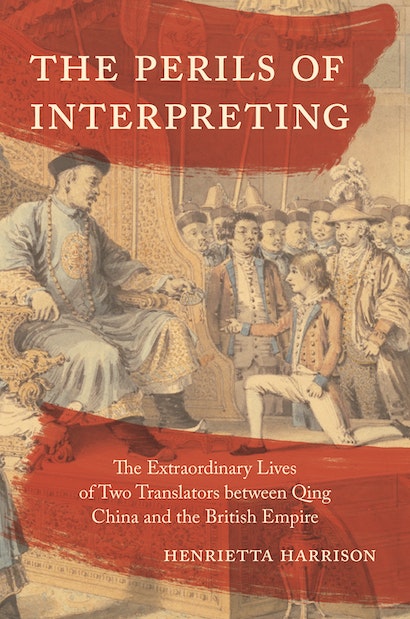 The Perils of Interpreting
Available in 2 editions
Buy This

Henrietta Harrison’s The Perils of Interpreting: The Extraordinary Lives of Two Translators between Qing China and the British Empire is one of eight titles shortlisted for the 2022 Cundill History Prize.

Harrison’s The Perils of Interpreting is an impressive new history of China’s relations with the West—told through the lives of two language interpreters who participated in the famed Macartney embassy in 1793. From Galway to Chendge, and from political intrigues to personal encounters, Harrison reassesses a pivotal moment in relations between China and Britain. Uncovering the lives of two overlooked interpreters—Li Zibiao and George Thomas Staunton—The Perils of Interpreting offers an emphatic argument for cross-cultural understanding in a connected world.

Henrietta Harrison is professor of modern Chinese studies at the University of Oxford and the Stanley Ho Tutorial Fellow in Chinese History at Pembroke College. Her other books include The Man Awakened from Dreams and The Missionary’s Curse and Other Tales from a Chinese Catholic Village. She lives in Oxford, England.

The prestigious Cundill History Prize is administered by McGill University in Montreal and is awarded annually in recognition of “encouraging informed public debate through the wider dissemination of history writing to new audiences around the world.” The 2022 Prize is overseen by J.R. McNeill, Chair, with fellow jurors Misha Glenny, Martha S. Jones, Yasmin Khan, and Kenda Mutongi.

Prior Cundill nominees from PUP’s list include Tyler Stovall’s White Freedom: The Racial History of an Idea; Emma Rothschild’s An Infinite History: The Story of a Family in France over Three Centuries; Judith Herrin’s Ravenna: Capital of Empire, Crucible of Europe; Peter Brown’s Through the Eye of the Needle: Wealth, the Fall of Rome, and the Making of Christianity in the West, 350-550 AD; Stuart Schwarz’s Sea of Storms: A History of Hurricanes in the Caribbean; James E Lewis Jr.’s The Burr Conspiracy: Uncovering the Story of an Early American Crisis; and Walter Scheidel’s The Great Leveler: Violence and the History of Inequality from the Stone Age to the Twenty-First Century.

Thomas Laqueur’s The Work of the Dead: A Cultural History of Mortal Remains—a richly detailed account of how and why the living have cared for the dead, from antiquity to the twentieth century—won the prize in 2016.

Three finalists for the Prize will be announced in October.