How modern economics abandoned classical liberalism and lost its way 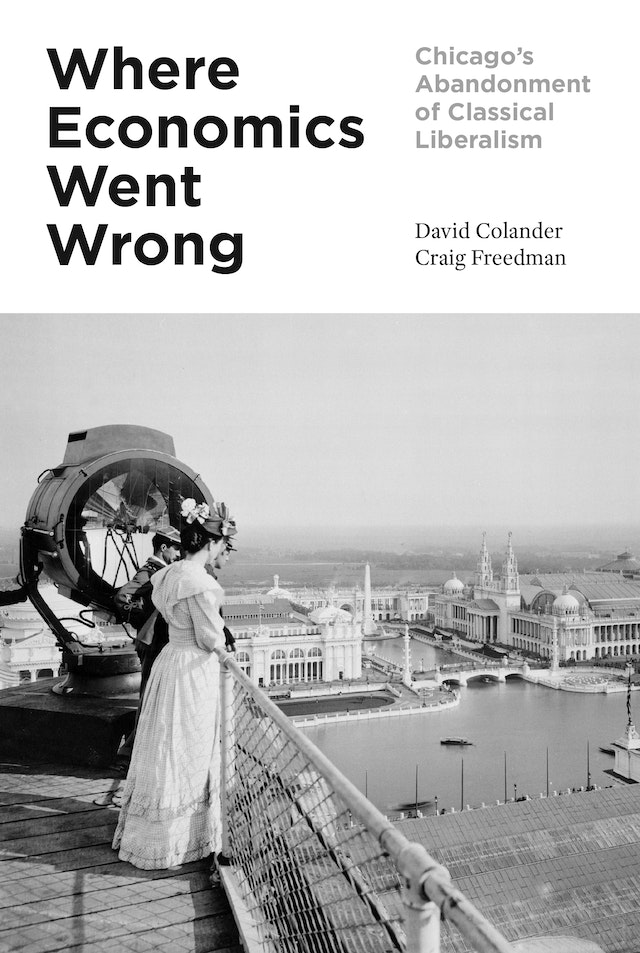 Milton Friedman once predicted that advances in scientific economics would resolve debates about whether raising the minimum wage is good policy. Decades later, Friedman’s prediction has not come true. In Where Economics Went Wrong, David Colander and Craig Freedman argue that it never will. Why? Because economic policy, when done correctly, is an art and a craft. It is not, and cannot be, a science. The authors explain why classical liberal economists understood this essential difference, why modern economists abandoned it, and why now is the time for the profession to return to its classical liberal roots.

Carefully distinguishing policy from science and theory, classical liberal economists emphasized values and context, treating economic policy analysis as a moral science where a dialogue of sensibilities and judgments allowed for the same scientific basis to arrive at a variety of policy recommendations. Using the University of Chicago—one of the last bastions of classical liberal economics—as a case study, Colander and Freedman examine how both the MIT and Chicago variants of modern economics eschewed classical liberalism in their attempt to make economic policy analysis a science. By examining the way in which the discipline managed to lose its bearings, the authors delve into such issues as the development of welfare economics in relation to economic science, alternative voices within the Chicago School, and exactly how Friedman got it wrong.

Contending that the division between science and prescription needs to be restored, Where Economics Went Wrong makes the case for a more nuanced and self-aware policy analysis by economists.

David Colander is Distinguished College Professor at Middlebury College. His many books include The Making of an Economist, Redux and Complexity and the Art of Public Policy (both Princeton). Craig Freedman is the author of Chicago Fundamentalism and In Search of the Two-Handed Economist.

"A heartfelt call for economics to return to its methodological roots in scrupulously separating judgements about economic policy from what can be known as a matter of scientific, empirical evidence. If economists take the advice offered in this book, the subject will become more humble, and humane, as it once used to be."—Diane Coyle, Bennett Professor of Public Policy, University of Cambridge

“Colander and Freedman’s wonderful book argues for a return to the discussion tradition of classical liberalism in which one offers a point of view, and recognizing one’s limitations, encourages other points of view. This careful book is based on numerous interviews with participants and opponents of the Chicago School from whom the authors are able to examine and understand many issues.”—David M. Levy, George Mason University

“George Stigler once joked that John Stuart Mill was the first economist to treat his opponents’ arguments with full respect: ‘The experiment,’ Stigler continued, ‘was never repeated.’ Colander and Freedman wisely want to revive a Millean and classical liberalism in method, a respectful one, which is under attack currently by misled scientists and populists. This deep yet cheerful book focuses on scientific rhetoric and shows that we’ll never understand economic science or policy until we recognize the force of language, in the economy and among economists.”—Deirdre McCloskey, Distinguished Professor of Economics, History, English, and Communication, University of Illinois at Chicago

“Colander and Freedman argue in this fascinating book that economists began to go wrong when they tore down the firewall between theory and policy—the first scientific and objective, the second judgmental and subjective. Once they forgot that their science does not, or rather cannot, produce clear and unambiguous policy advice, all kinds of mischief followed. Drawing on the history of economic thought as well as contemporary debate, the authors provide an account that is as engaging as it is challenging to professional economists.”—Dani Rodrik, author of Straight Talk on Trade