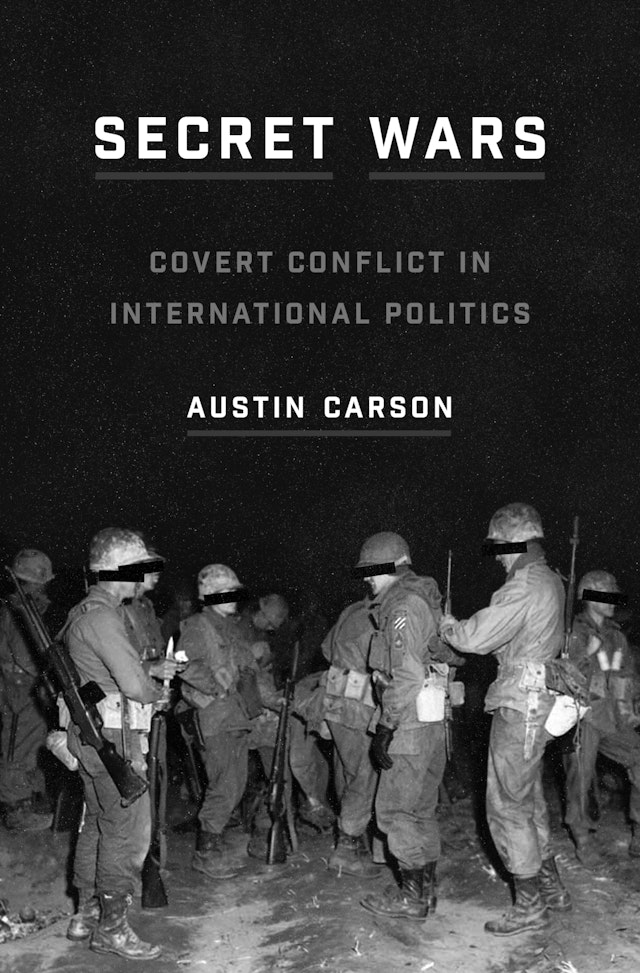 Secret Wars is the first book to systematically analyze the ways powerful states covertly participate in foreign wars, showing a recurring pattern of such behavior stretching from World War I to U.S.-occupied Iraq. Investigating what governments keep secret during wars and why, Austin Carson argues that leaders maintain the secrecy of state involvement as a response to the persistent concern of limiting war. Keeping interventions “backstage” helps control escalation dynamics, insulating leaders from domestic pressures while communicating their interest in keeping a war contained.

Carson shows that covert interventions can help control escalation, but they are almost always detected by other major powers. However, the shared value of limiting war can lead adversaries to keep secret the interventions they detect, as when American leaders concealed clashes with Soviet pilots during the Korean War. Escalation concerns can also cause leaders to ignore covert interventions that have become an open secret. From Nazi Germany’s role in the Spanish Civil War to American covert operations during the Vietnam War, Carson presents new insights about some of the most influential conflicts of the twentieth century.

Parting the curtain on the secret side of modern war, Secret Wars provides important lessons about how rival state powers collude and compete, and the ways in which they avoid outright military confrontations.

Austin Carson is assistant professor of political science at the University of Chicago.

"This is a very interesting and thought-provoking analysis of covert conflict in international politics."—Paradigm Explorer

"[A]n outstanding book, one likely to produce a vibrant research program in the years to come."—Stacie Goddard, H-Diplo

“Why do states intervene overtly in some military conflicts but covertly in others? This innovative and compelling study, one of the best available on covert intervention, argues that states intervene secretly to avoid potentially dangerous escalation. In a fascinating twist, adversaries that discover covert interventions sometimes play along, keeping them secret to avoid pressures for counterintervention. Carson brilliantly illuminates this hidden side of war.”—Alexander B. Downes, George Washington University

“This is the first thorough exploration of the role of secrecy in war—not to keep things from the adversary, but to control the pressures for escalation and to collude with the adversary in order to keep a war limited. With important arguments and case studies, this excellent book offers new information and interpretations of facts. It will have a major impact.”—Robert Jervis, Columbia University

“This book persuasively argues that both covert action in limited war, and observers’ collusion in keeping those actions secret, are driven by fear of escalation and the desire to keep war limited. Secret Wars substantiates these claims well, drawing on carefully researched and strong case studies covering key participants in a series of important wars that featured covert action.”—Ronald Krebs, University of Minnesota

“Secret Wars brings a common but hidden form of conflict into the light. States love secrecy, but this book shows that adversaries often collude with each other to keep war in the shadows and off the escalation ladder. Carson has produced an exceptionally well-researched and creative study."—Elizabeth N. Saunders, George Washington University

“Secret Wars has in its sights a significant puzzle: why do states intervene covertly in conflicts, rather than overtly, and why do their adversaries let them get away with it? Drawing from an eclectic range of psychological and sociological theories, and steeped in original historical research, Carson argues that states keep interventions ‘open secrets’ in hopes of preventing local conflicts from escalating into catastrophic major power wars. At a moment when state leaders are facing myriad covert threats—from cyberattacks to election meddling—Secret Wars is timely and necessary reading for scholars and policymakers alike.”—Stacie Goddard, Wellesley College