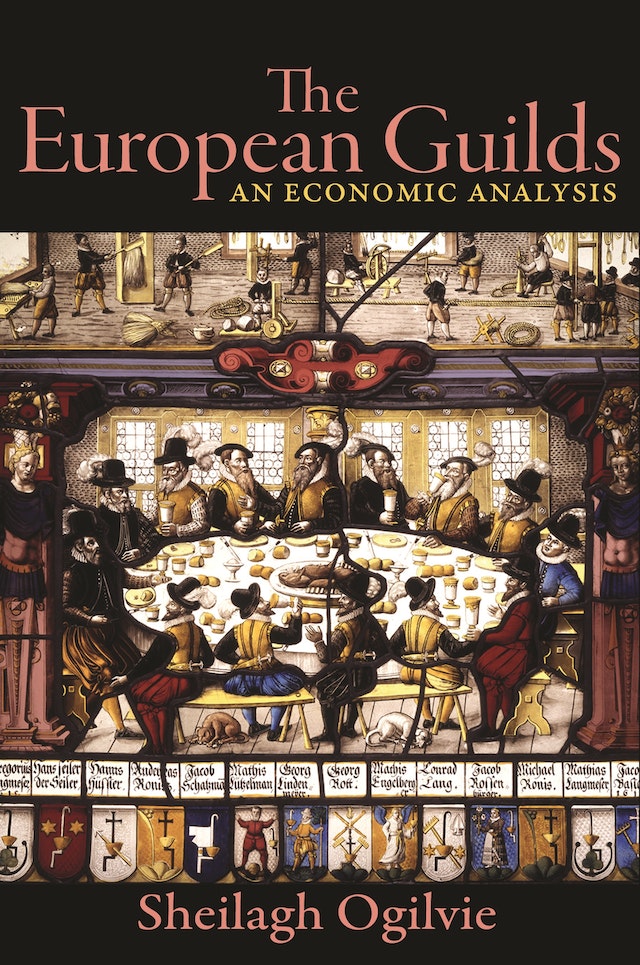 Guilds ruled many crafts and trades from the Middle Ages to the Industrial Revolution, and have always attracted debate and controversy. They were sometimes viewed as efficient institutions that guaranteed quality and skills. But they also excluded competitors, manipulated markets, and blocked innovations. Did the benefits of guilds outweigh their costs? Analyzing thousands of guilds that dominated European economies from 1000 to 1880, The European Guilds uses vivid examples and clear economic reasoning to answer that question.

Sheilagh Ogilvie’s book features the voices of honourable guild masters, underpaid journeymen, exploited apprentices, shady officials, and outraged customers, and follows the stories of the “vile encroachers”—women, migrants, Jews, gypsies, bastards, and many others—desperate to work but hunted down by the guilds as illicit competitors. She investigates the benefits of guilds but also shines a light on their dark side. Guilds sometimes provided important services, but they also manipulated markets to profit their members. They regulated quality but prevented poor consumers from buying goods cheaply. They fostered work skills but denied apprenticeships to outsiders. They transmitted useful techniques but blocked innovations that posed a threat. Guilds existed widely not because they corrected market failures or served the common good but because they benefited two powerful groups—guild members and political elites.

Sheilagh Ogilvie is professor of economic history at the University of Cambridge and a fellow of the British Academy. Her books include Institutions and European Trade and A Bitter Living.

"The new and highly comprehensive book by Sheilagh Ogilvie . . . . likely to stand as one of the more important works of economic history from the last decade."—Tyler Cowen, Marginal Revolution

"A major contribution to economic history and institutional economics."—Mark Koyama, The Review of Austrian Economics

"A comprehensive study of European guilds."—Steven A. Epstein, H-France Review

"Ogilvie has re-galvanised the debate on guilds."—Richard Goddard, Medieval Archaeology

"A learned and comprehensive study of an institution that stood at the heart of the European non-agricultural economy for over seven centuries."—Jan de Vries, EH.net

"Ogilvie’s wide-ranging and scrutinous analysis of craft guilds is an essential and stimulating read for all scholars interested in guilds and institutions."—Arie van Steensel, Low Countries Journal of Social and Economic History

“Sheilagh Ogilvie’s astounding and readable book demolishes the idea—as old as nineteenth-century German historical scholarship but revived recently as a blackboard possibility—that monopoly privilege is good for us. She presents the hypothesis fairly and with political and historical subtlety. And then she crushes it—overwhelmingly, definitively, scientifically—as the guild idea was once crushed by liberalism. Illiberalism has revived monopoly. Historical science raises the alarm.”—Deirdre N. McCloskey, University of Illinois at Chicago

“This excellent study of craft guilds is a successor to Sheilagh Ogilvie’s brilliant 2011 book on merchant guilds, Institutions and European Trade. In The European Guilds, she shows us how careful we have to be about accepting uncritically claims made by various professional associations that benefits for their members are also good for society at large. Ogilvie has many wise things to say about social capital and the origins of European economic development.”—Paul Seabright, author of The Company of Strangers

“In The European Guilds, Sheilagh Ogilvie displays her characteristically trenchant analytical skills and vast repository of knowledge. The result is a tightly and richly documented rebuttal to the view that European craft guilds were a positive force in economic development before the Industrial Revolution. This superb and provocative book will generate controversy and have a wide impact on vibrant debates in economic history.”—Francesca Trivellato, Institute for Advanced Study

“This book is a powerful counterblast against the views of historians who emphasize the efficiency or social, political, and cultural virtues of guilds. Sheilagh Ogilvie’s lucid arguments are based on a wide reading of the literature on guilds in almost every part of Europe, making this book an extremely important contribution to the debate on craft guilds as well as the debates about economic institutions in general.”—Karel Davids, Vrije University Amsterdam