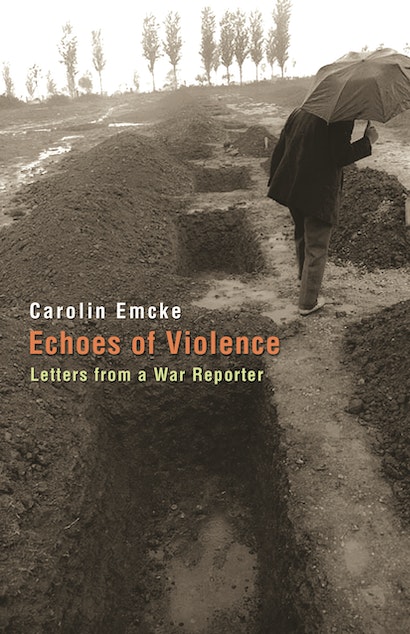 “Nobody I ever met on my assignments … asked me for direct, practical help… . But over and over again people have asked me: ‘Will you write this down?’ “ — Echoes of Violence
?

Echoes of Violence is an award-winning collection of personal letters to friends from a foreign correspondent who is trying to understand what she witnessed during the iconic human disasters of our time — in Iraq, Lebanon, Afghanistan, and New York City on September 11th, among many other places. Originally addressing only a small group of friends, Carolin Emcke started the first letter after returning from Kosovo, where she saw the aftermath of ethnic cleansing in 1999. She began writing to overcome her speechlessness about the horrors of war and her own sense of failure as a reporter. Eventually, writing a letter became a ritual Emcke performed following her return from each nightmare she experienced. First published in 2004 to great acclaim, Echoes of Violence in 2005 was named German political book of the year and was a finalist for the international Lettre-Ulysses award for the art of reportage.


Combining narrative with philosophic reflection, Emcke describes wars and human rights abuses around the world — the suffering of civilians caught between warring factions in Colombia, the heartbreaking plight of homeless orphans in Romania, and the near-slavery of garment workers in Nicaragua. Freed in the letters from journalistic conventions that would obscure her presence as a witness, Emcke probes the abyss of violence and explores the scars it leaves on landscapes external and internal.

Carolin Emcke is a journalist, political theorist, and writer. She has a doctorate in philosophy and has been a visiting lecturer in political theory at Yale. As a staff writer for the foreign news desk of Der Spiegel, she has written about war crimes and human rights violations around the world. In 2006 she was awarded the Ernst Bloch Förderpreis, a German award given to scholars and philosophers of extraordinary promise. She lives in Berlin.

"As a woman from a formal university background, Emcke was not prepared for situations that defy language, that cannot easily be shared with other people who have not been there...So, intelligently, she formed the habit of writing extended narrative letters to her circle at home which would at least communicate her own sensations...These letters, first written as a way of communicating and later, as she says, becoming a means to personal catharsis, form the basis for Echoes of Violence...A reader's memory will take away from her book a gallery of magnificent survivors, men and especially women who tell their tales without self-pity and who refuse to surrender to the miseries piled upon them."—Neal Ascherson, New York Review of Books

"Through her personal letters to friends, Der Spiegel war correspondent Emcke offers a perspective on war beyond journalistic dispatches. . . . Emcke describes the moral and political delicacy of reporting on a war from one side or the other and the overwhelming questions of humanity and inhumanity found in the midst of war."—Vanessa Bush, Booklist

"This collection of . . . letters combines gripping narrative with philosophic reflection on the meaning of war and the limitations of journalism to communicate the abyss of violence."—Kathy English, The Globe and Mail

"Emcke . . . recounts personal stories to illuminate the larger significance not only of each particular story/assignment/war but also of the nature of injustices. . .. She handles battle with grace, both in the midst of conflict and, later, on the page. . . . [H]er fine reportage shines through in it, particularly in moments on the northern front, which it's likely history will barely remember."—Eliza Griswold, Bookforum

"A compelling blend of narrative and analysis, description and reflection. . . . [Carolin Emcke's] passages about the limited but important role of journalists in war remind us of the need for someone to bear witness. Our role—difficult but not as difficult as hers—is to listen to the witness."—Lorien Kaye, The Age

"An erudite writer with a PhD in philosophy, Emcke is the thinking person's reporter. Her book is peppered with quotes from ancient and modern thinkers who have shaped her own understanding of the human condition. She combines gripping, dramatic stories with philosophical reflection on the nature of violence as she tries to make sense of human suffering."—Levon Sevunts, Montreal Gazette

"Emcke is to be applauded for the power of her writing, her commitment to the importance of ordinary people's suffering, and her honesty in laying out her thoughts and reactions for all to see.... Reading the book, it was not immediately apparent why it enjoys such stellar regard in Europe and the United States. This seems a remarkably ungenerous judgment to make about personal writing not intended to be read by strangers, that was produced as an attempt at catharsis and transcendence, that deals with appalling human suffering in our own time, and whose prose is clear and elegant. And it is most certainly a powerful and moving book."—Chris Nash, Australian Review of Public Affairs

"This is a fascinating text that raises crucial questions about the nature of war and suffering—and how journalists can best respond to them."—Richard Keeble, European Legacy