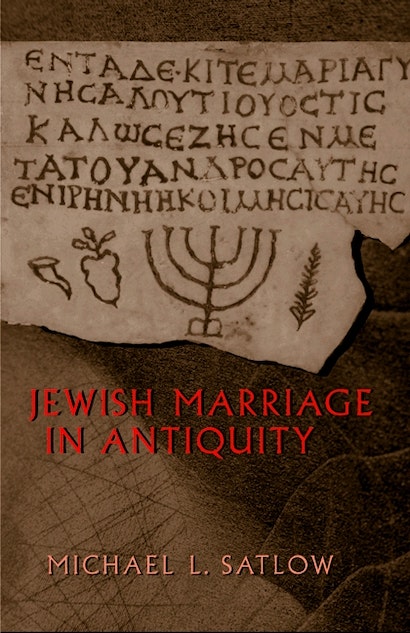 Marriage today might be a highly contested topic, but certainly no more than it was in antiquity. Ancient Jews, like their non-Jewish neighbors, grappled with what have become perennial issues of marriage, from its idealistic definitions to its many practical forms to questions of who should or should not wed. In this book, Michael Satlow offers the first in-depth synthetic study of Jewish marriage in antiquity, from ca. 500 B.C.E. to 614 C.E. Placing Jewish marriage in its cultural milieu, Satlow investigates whether there was anything essentially “Jewish” about the institution as it was discussed and practiced. Moreover, he considers the social and economic aspects of marriage as both a personal relationship and a religious bond, and explores how the Jews of antiquity negotiated the gap between marital realities and their ideals.


Focusing on the various experiences of Jews throughout the Mediterranean basin and in Babylonia, Satlow argues that different communities, even rabbinic ones, constructed their own “Jewish” marriage: they read their received traditions and rituals through the lens of a basic understanding of marriage that they shared with their non-Jewish neighbors. He also maintains that Jews idealized marriage in a way that responded to the ideals of their respective societies, mediating between such values as honor and the far messier realities of marital life. Employing Jewish and non-Jewish literary texts, papyri, inscriptions, and material artifacts, Satlow paints a vibrant portrait of ancient Judaism while sharpening and clarifying present discussions on modern marriage for Jews and non-Jews alike.

Michael L. Satlow is Associate Professor in the Department of Religious Studies and in the Jewish Studies Program at Indiana University in Bloomington. He is the author of Tasting the Dish: Rabbinic Rhetorics of Sexuality.

"[An] illuminating and comprehensive book. . . . The difficult questions of Jewish marriage today, such as a concern over Jews marrying non-Jews and the changing definitions of who constitutes a married couple, may not actually have many new elements. Judaism of the past and present has always been in conversation with its host society about such fluid matters."—Tawny L. Holm, Bryn Mawr Classical Review