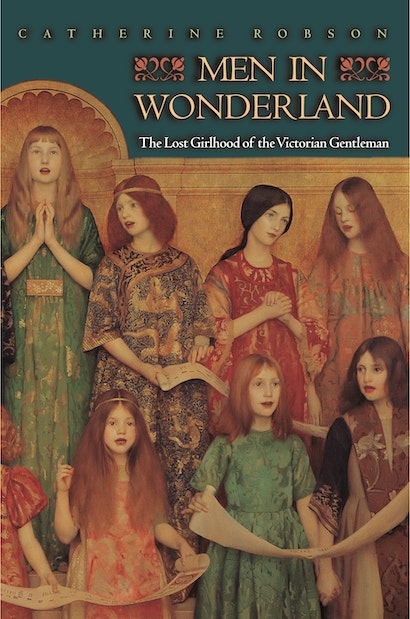 Fascination with little girls pervaded Victorian culture. For many, girls represented the true essence of childhood or bygone times of innocence; but for middle-class men, especially writers, the interest ran much deeper. In Men in Wonderland, Catherine Robson explores the ways in which various nineteenth-century British male authors constructed girlhood, and analyzes the nature of their investment in the figure of the girl. In so doing, she reveals the link between the idealization of little girls and a widespread fantasy of male development — a myth suggesting that men become masculine only after an initial feminine stage, lived out in the protective environment of the nursery. Little girls, argues Robson, thus offer an adult male the best opportunity to reconnect with his own lost self.


Tracing the beginnings of this myth in the writings of Romantics Wordsworth and De Quincey, Robson identifies the consolidation of this paradigm in numerous Victorian artifacts, ranging from literary works by Dickens and Barrett Browning, to paintings by Frith and Millais, to reports of the Royal Commission on Children’s Employment. She analyzes Ruskin and Carroll’s “high noon” of girl worship and investigates the destruction of the fantasy in the closing decades of the century, when social concerns about the working girl sexualized the image of young females.

Men in Wonderland contributes to a growing interest in the nineteenth century’s construction of childhood, sexuality, and masculinity, and illuminates their complex interconnections with a startlingly different light. Not only does it complicate the narratives of pedophilic desire that are generally used to explain figures like Ruskin and Carroll, but it offers a new understanding of the Victorian era’s obsession with loss, its rampant sentimentality, and its intense valorization of the little girl at the expense of mature femininity.

"What is new about Robson's argument is her contention that for many well-to-do men the image of perfect childhood, lost and desired, remained feminine. . . . Understood this way, the idealisation of little girls in Victorian culture is an attempt to repossess the remembered self rather than a wish for sexual possession of the other."—Dinah Birch, London Review of Books

"[An] illuminating study of the relationships that existed between little girls and a whole synod of Victorian middle-class men. . . . What Robson detects in these men is less paedophilic desire and more a melancholy sense of something lost. . . . Ruskin, Carroll, and their fellow enthusiasts, she contends, were chasing their own pasts."—Matthew Sweet, Independent on Sunday

"[Victorians] certainly had a complicated relationship with sexuality and the young. This book can be recommended for throwing at least some new light on this troubled topic."—Nicholas Tucker, Times Higher Education Supplement

"An excellent book . . . powerfully and persuasively written . . . free of jargon, rich in its scholarship, and fully in touch with recent work in a burgeoning field. In all, it is a valuable addition to a growing list of books that help us see the Victorians and their world in fresher, richer ways."—Carole G. Silver, Nineteenth-Century Literature