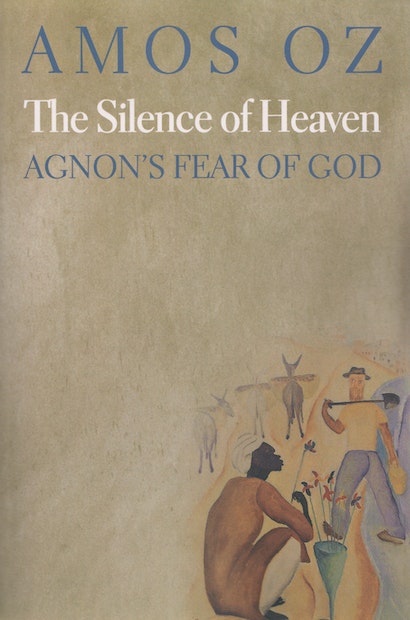 In The Silence of Heaven, the world renowned Israeli novelist Amos Oz introduces us to an extraordinary masterpiece of Hebrew literature that is just now appearing in English, S. Y. Agnon’s Only Yesterday. For Oz, Agnon is a treasure trove of a world no longer available to today’s writers, yet deeply meaningful for his wonderment about God, the submerged eroticism of his writing, and his juggling of multiple texts from the historical Hebrew religious library. This collection of Oz’s reflections on Agnon, which includes an essay on the essence of his ideology and poetics, is a rich interpretive work that shows how one great writer views another.


Oz admires Agnon especially for his ability to invoke and visualize the religious world of the simple folk in Eastern European Jewry, looking back from the territorial context of the Zionist revival in Palestine. The tragedy of Agnon’s visions, Oz maintains, lies in his perspicacity. Long before the Holocaust, Agnon saw the degeneration, ruin, and end of Jewish culture in Eastern Europe. He knew, too, that the Zionist project was far from being a secure conquest and its champions far from being happy idealists. Oz explores these viewpoints in a series of thick readings that consider the tensions between faith and the shock of doubt, yearnings and revulsion, love and hate, and intimacy and disgust.


Although Oz himself is interested in particular ideological questions, he has the subtle sensibility of a master of fiction and can detect every technical device in Agnon’s arsenal. With the verve of an excited reader, Oz dissects Agnon’s texts and subtexts in a passionate argument about the major themes of Hebrew literature. This book also tells much about Oz. It represents the other side of Oz’s book of reportage, In the Land of Israel, this time exploring the ideologies of Jewish identity not on the land but in texts of the modern classical heritage. The Silence of Heaven hence takes us on a remarkable journey into the minds of two major literary figures.

Amos Oz was born in Jerusalem in 1939 and is a well-known novelist, short-story writer, and essayist. After serving in the Israeli army and graduating from the Hebrew University of Jerusalem, Oz served as a reservist in the Israeli army in the 1967 Six Day War and again in the Yom Kippur War in 1973. Since 1967 he has been actively involved with various peace groups striving for an Israeli-Palestinian peace based on mutual recognition. Oz's works of fiction include My Michael, Don't Call It Night, Fima, and, most recently, Panther in the Basement. His works have won him the Prix Fémina Étranger, France's top literary award for a foreign novel. He is also the winner of the International Frankfurt Peace Prize, the Israel Prize for Literature, and many other literary awards. Oz's works have been translated into thirty-one languages. He also holds the Agnon Chair for Modern Hebrew Literature at Ben Gurion University of the Negev in Israel. Amos Oz resides with his family in Arad in the Negev desert in the south of Israel.

"A thought-provoking set of essays. . . . Oz . . . perceives Agnon as profoundly, indelibly traumatized by the historical catastrophe of East European Jewry which he foresaw. Oz points that Agnon's male heroes [are] full of guilt, saddled by sins they cannot fathom, reflect the incurable, insoluble pain suffered by Agnon's generation."—Susan Miron, The Philadelphia Inquirer

"Amoz Oz has read Agnon closely and has many intelligent observations to make, extrapolating the mysteries of fiction."—David Pryce-Jones, The Spectator

"[An] impassioned and closely argued tribute. . . .Oz cherishes Agnon as a radical modernist and teases out dark subtexts, even from his most traditional looking works."—Morris Dickstein, Times Literary Supplement

"Amos Oz, a fine Hebrew novelist in his own right, writes well about Agnon. The Silence of Heaven [has] grown out of years of teaching Agnon's works. . ."—Hillel Halkin, The New Republic