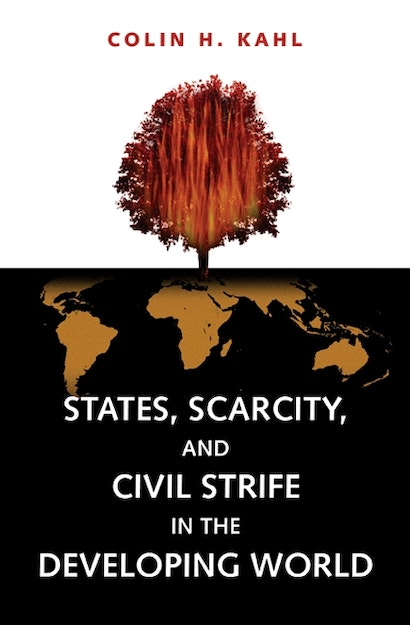 Over the past several decades, civil and ethnic wars have undermined prospects for economic and political development, destabilized entire regions of the globe, and left millions dead. States, Scarcity, and Civil Strife in the Developing World argues that demographic and environmental stress — the interactions among rapid population growth, environmental degradation, inequality, and emerging scarcities of vital natural resources — represents one important source of turmoil in today’s world.


Kahl contends that this type of stress places enormous strains on both societies and governments in poor countries, increasing their vulnerability to armed conflict. He identifies two pathways whereby this process unfolds: state failure and state exploitation. State failure conflicts occur when population growth, environmental degradation, and resource inequality weaken the capacity, legitimacy, and cohesion of governments, thereby expanding the opportunities and incentives for rebellion and intergroup violence. State exploitation conflicts, in contrast, occur when political leaders themselves capitalize on the opportunities arising from population pressures, natural resource scarcities, and related social grievances to instigate violence that serves their parochial interests.


Drawing on a wide array of social science theory, this book argues that demographically and environmentally induced conflicts are most likely to occur in countries that are deeply split along ethnic, religious, regional, or class lines, and which have highly exclusive and discriminatory political systems. The empirical portion of the book evaluates the theoretical argument through in-depth case studies of civil strife in the Philippines, Kenya, and numerous other countries. The book concludes with an analysis of the challenges demographic and environmental change will pose to international security in the decades ahead.

Colin Kahl is assistant professor in the Securities Studies Program at Georgetown University's Edmund A. Walsh School of Foreign Service, and a fellow at the Center for a New American Security. He is also a consultant for the Political Instability Task Force and the Department of Defense.

"[Kahl] describes two main paths by which extreme poverty raises the likelihood of violent conflict and the collapse of a state into lawlessness."—Jeffrey D. Sachs, Scientific American

"States, Scarcity, and Civil Strife is an exemplar of cumulative social science research. . . . Colin Kahl is a highly select class: he ranges back and forth across analysis of the natural and social worlds with nimbleness and a mastery of his material. The book he has produced is a tour de force."—Thomas Homer-Dixon, Population and Development Review

"An excellent contribution.... An important step toward improving our understanding of the demographic and environmental linkages to conflict."—Patricia Kameri-Mbote, ECSP Report

"Besides presenting his own neo-Malthusian model, the author also provides critical but fair accounts of its theoretical competitors, e.g., the (neo-Marxist) 'political ecology' paradigm and the (neo-classical) theories of Collier and others. The book is generally well-structured and well-written, requiring neither mathematical nor economic training of the reader. It is highly recommended as an important contribution to general conflict theory."—Bjorn Moller, Economics of Peace and Security Journal

"Kahl's study is currently the most theoretically advanced attempt to include environmental degradation and demographic developments into a social science model of the causation of intrastate violence."—Klaus Schlichte, Perspectives on Politics

"[T]his book is an essential read for anyone interested in understanding the relationship between population growth, environmental degradation, scarcity, and civil strife. Kahl draws attention to a very serious problem which is likely to lead to more human suffering over time unless efforts are made to address it."—Robert A. Dowd, Development in Practice