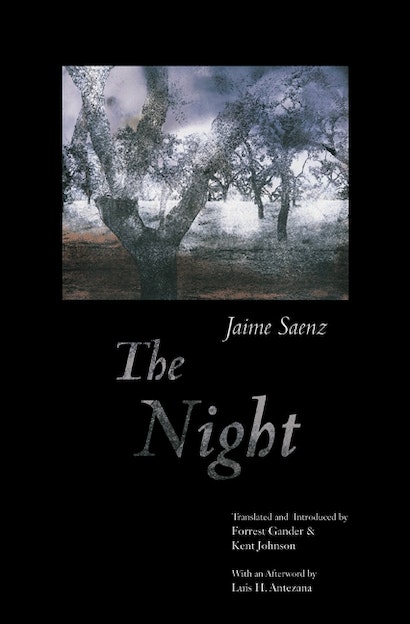 Jaime Saenz is arguably the greatest Bolivian writer of the twentieth century. His poetry is apocalyptic, transcendent, hallucinatory, brilliant — and, until recently, available only in Spanish. Forrest Gander and Kent Johnson’s translations of Saenz’s work have garnered much-deserved attention and acclaim. Here for the first time in English they give us his masterpiece, The Night, Saenz’s most famous poem and the last he wrote before his death in 1986.


An unusual man, Saenz lived his whole life in La Paz, Bolivia, seldom venturing far from the city and its indigenous culture that feature so prominently in his writings. He sought God in unlikely places: slum taverns, alcoholic excess, the street. Saenz was nocturnal. He once stole a leg from a cadaver and hid it under his bed. On his wedding night he brought home a panther.


In this epic poem, Saenz explores the singular themes that possessed him: alcoholism, death, nightmares, identity, otherness, and his love for La Paz. The poem’s four movements culminate in some of the most profoundly mystical, beautiful, and disturbing passages of modern Latin American poetry. They are presented here in this faithful and inspired English translation of the Spanish original.


Complete with an introduction by the translators that paints a vivid picture of the poet’s life, and an afterword by Luis H. Antezana, a notable Bolivian literary critic and close friend of Saenz, this bilingual edition is the essential introduction to one of the most visionary and enigmatic poets of the Hispanic world.

Forrest Gander is Professor of English and Comparative Literature at Brown University. He is the author of numerous books, including Eye Against Eye. Kent Johnson is Instructor of English and Spanish at Highland Community College. His books include Lyric Poetry After Auschwitz: Eleven Submissions to the War.

"Published as a part of the excellent Facing Pages series of translations, major Bolivian poet Jaime Saenz's death-obsessed masterwork, The Night, is now available in English for the first time. Veteran translators Forrest Gander and Kent Johnson of Saenz (1921-1986) seem to understand the haunting beauty of these lines as though they had written them."—Publishers Weekly

"This bilingual edition of Saenz's The Night brings to English-speaking readers the anguished, hallucinogenic world of this morbid Bolivian poet...The translators' introduction sets the tone and scene, and their inspired translation communicates the terrible intensity of Saenz's images and his fascinating with death."—D.L. Heyck, Choice

"Published two years before the Bolivian poet Jaime Saenz's death in 1984, The Night redefines what it means to be illuminated by anatomizing the experience of being enveloped in darkness...Exquisitely produced, this edition advances Saenz's ultimate mission for The Night: to reveal a vision of the body connected with its soul, 'inhabiting' it, passing through a life full of danger, fear, and humiliation, constructing a holistic view of existence, a unified conception of life and death."—Aaron Belz, Boston Review

"American readers will find that The Night diverges from much contemporary American poetry, particularly in its elaborate symbolism and ethereal atmosphere. The Night is best read as a complete piece, preferably in one sitting, and probably more than once. Readers will find their time well spent."—Lisa Butts, Pleiades