A handsome annotated edition of Einstein’s celebrated book on relativity 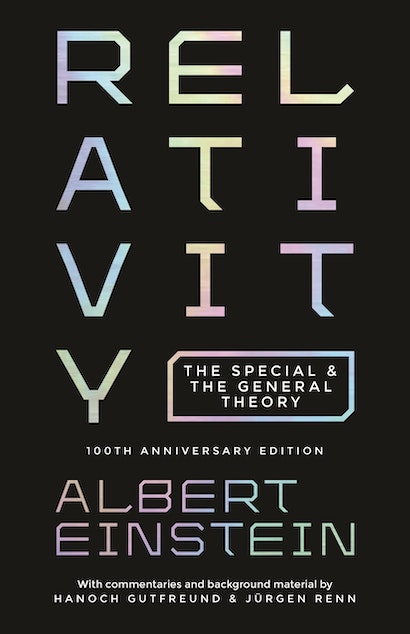 After completing the final version of his general theory of relativity in November 1915, Albert Einstein wrote Relativity. Intended for a popular audience, the book remains one of the most lucid explanations of the special and general theories ever written. This edition of Einstein’s celebrated book features an authoritative English translation of the text along with commentaries by Hanoch Gutfreund and Jürgen Renn that examine the evolution of Einstein’s thinking and cast his ideas in a modern context. Providing invaluable insight into one of the greatest scientific minds of all time, the book also includes a unique survey of the introductions from past editions, covers from selected early editions, a letter from Walther Rathenau to Einstein discussing the book, and a revealing sample from Einstein’s original handwritten manuscript.

"This authoritative centenary edition is a fitting tribute to Einstein’s efforts to make his concepts accessible—in turn, helping to raise the profile of basic science and modern physics on a global scale."—Mary Craig, Nature

“This new edition of Einstein’s popular presentation of both special and general relativity is a joy to read. Over the past hundred years, relativity has been brought to the public in many forms—magazines, books, documentaries—but there’s nothing quite like being guided through one of the most profound scientific insights of all time by the master himself.”—Brian Greene, Columbia University

“This book is not only an important historical document, but displays the style and clarity of Einstein’s thought in a manner accessible to a wide readership. It’s good that it is being reissued in this fine new edition to mark the centenary of his greatest insights.”—Martin Rees, Trinity College, University of Cambridge, and Astronomer Royal

“[Relativity] conjures Einstein as the oracle presenting a theory to the world—one of the most revolutionary and profound theories of all time.”—Pedro Ferreira, Nature

“Nobody is better at explaining relativity than Einstein himself. . . . This 100th anniversary edition is complemented by commentary from Gutfreund and Renn, who clarify some key points and add historical perspective, making Einstein’s own words even more accessible and meaningful.”—Tom Siegfried, Science News