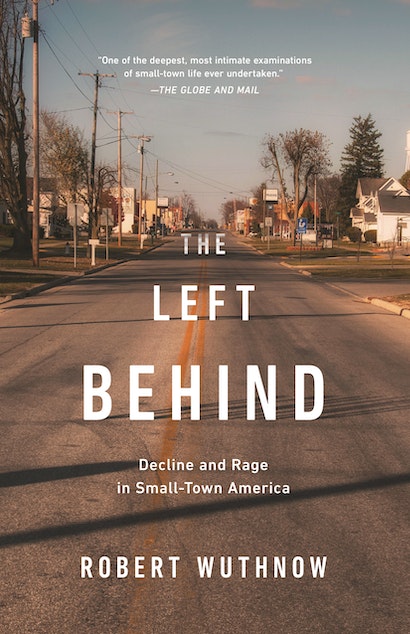 What is fueling rural America’s outrage toward the federal government? Why did rural Americans vote overwhelmingly for Donald Trump? And is there a more nuanced explanation for the growing rural-urban divide? Drawing on more than a decade of research and hundreds of interviews, Robert Wuthnow brings us into America’s small towns, farms, and rural communities to paint a rich portrait of the moral order—the interactions, loyalties, obligations, and identities—underpinning this critical segment of the nation. Wuthnow demonstrates that to truly understand rural Americans’ anger, their culture must be explored more fully, and he shows that rural America’s fury stems less from economic concerns than from the perception that Washington is distant from and yet threatening to the social fabric of small towns. Moving beyond simplistic depictions of America’s heartland, The Left Behind offers a clearer picture of how this important population will influence the nation’s political future.

Robert Wuthnow is the Gerhard R. Andlinger ’52 Professor of Social Sciences at Princeton University. His many books include Small-Town America and Remaking the Heartland (both Princeton).

“Wuthnow has conducted one of the deepest, most intimate examinations of small-town life ever undertaken."—David Shribman, Globe and Mail

“Writing with empathy . . . the author reflects on the factors shaping rural life—from the importance of faith to the stability and familiarity of life in town to the importance of ritual events (barn dances, etc.), stories, and symbols—as well as pressing problems (brain drain, teen pregnancy, drugs, lack of good jobs) and concerns over moral decline (abortion and homosexuality). . . . A superb, authoritative sociology book.”—Kirkus Reviews

“Thanks to Wuthnow’s rich observations, we are able to address and understand what truly confronts us as a nation: the triumph of mass society through mass politics in the name of the ‘little guy.’ Little did we know that such a person would also have the hands to match. ”—L. Benjamin Rolsky, Los Angeles Review of Books