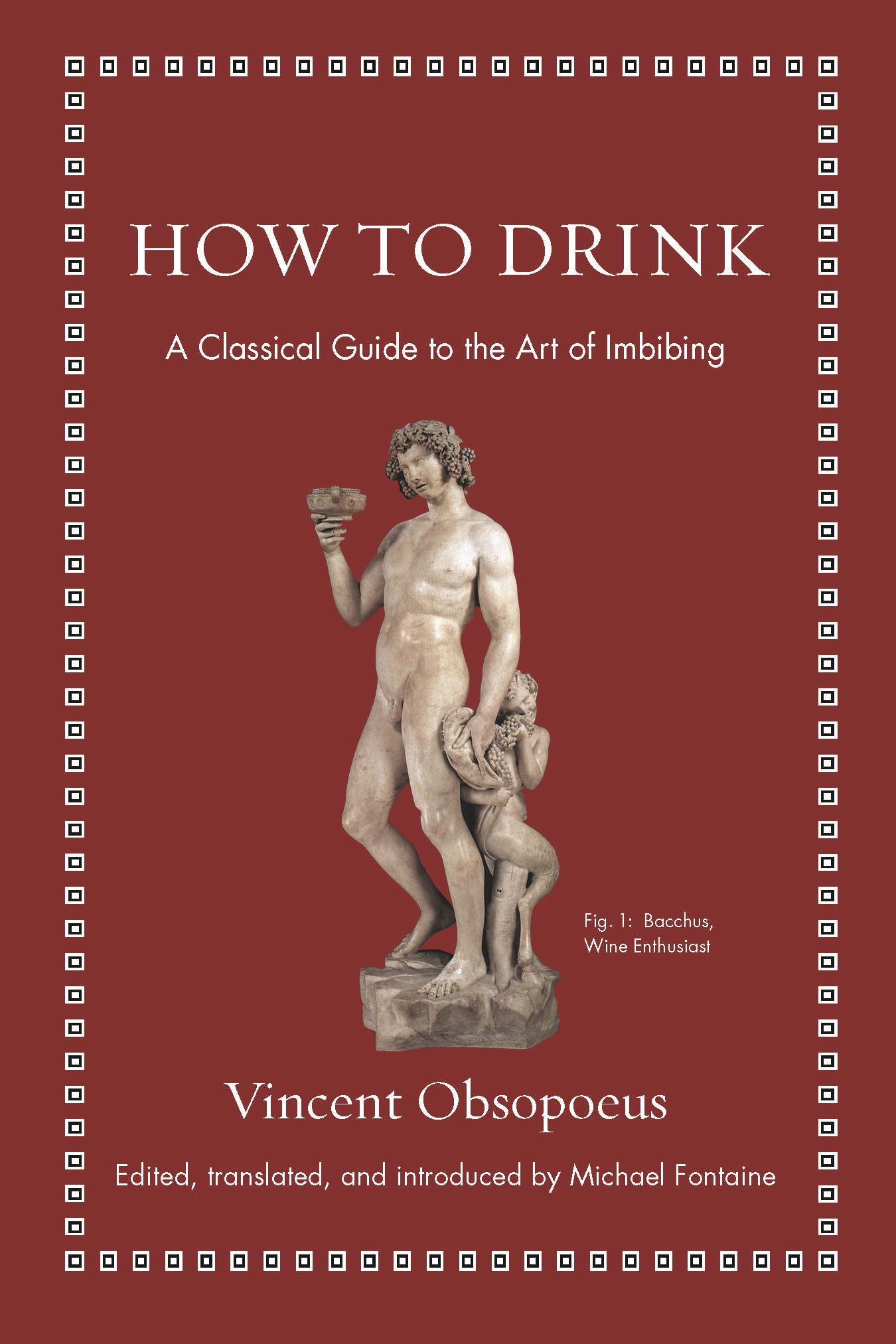 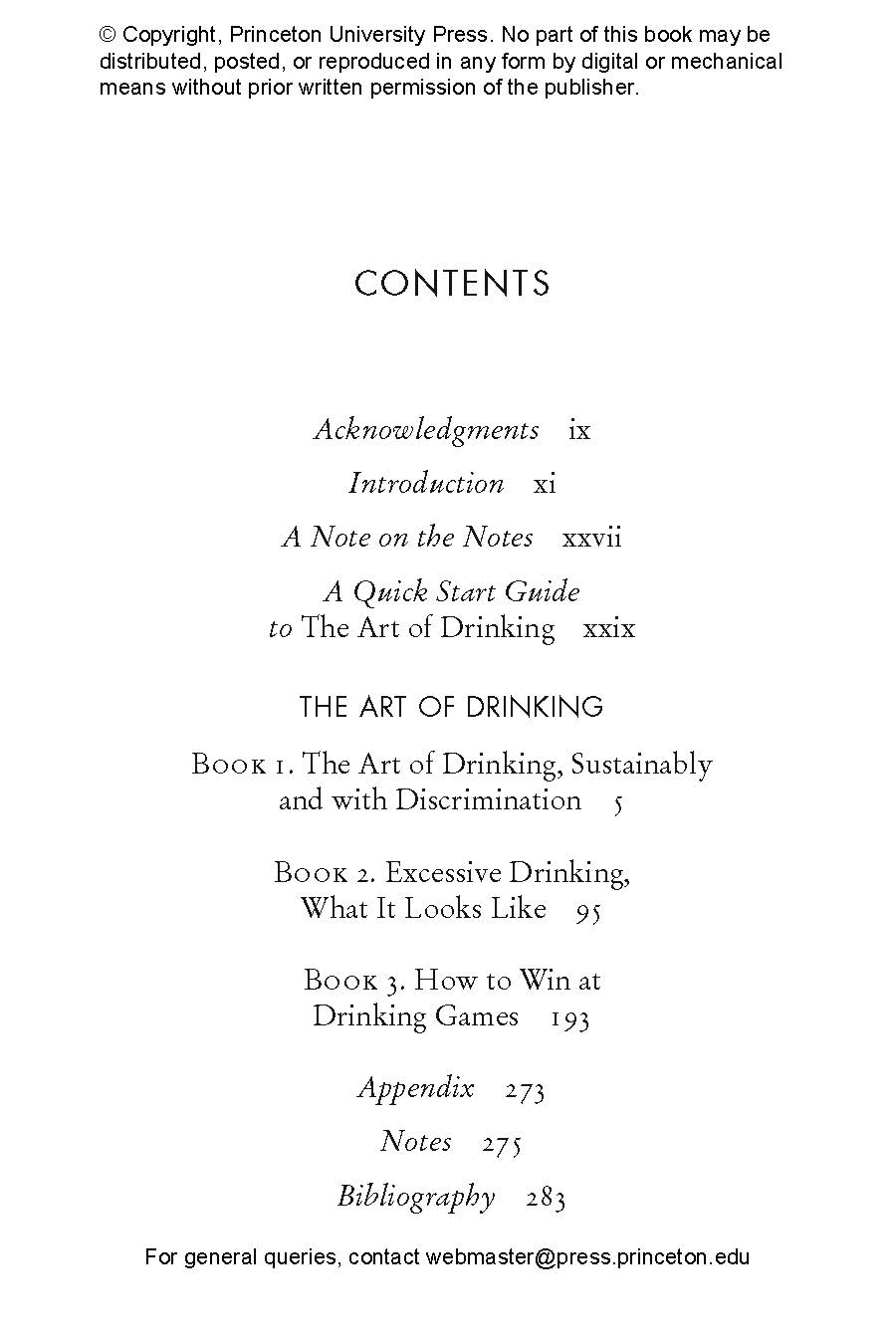 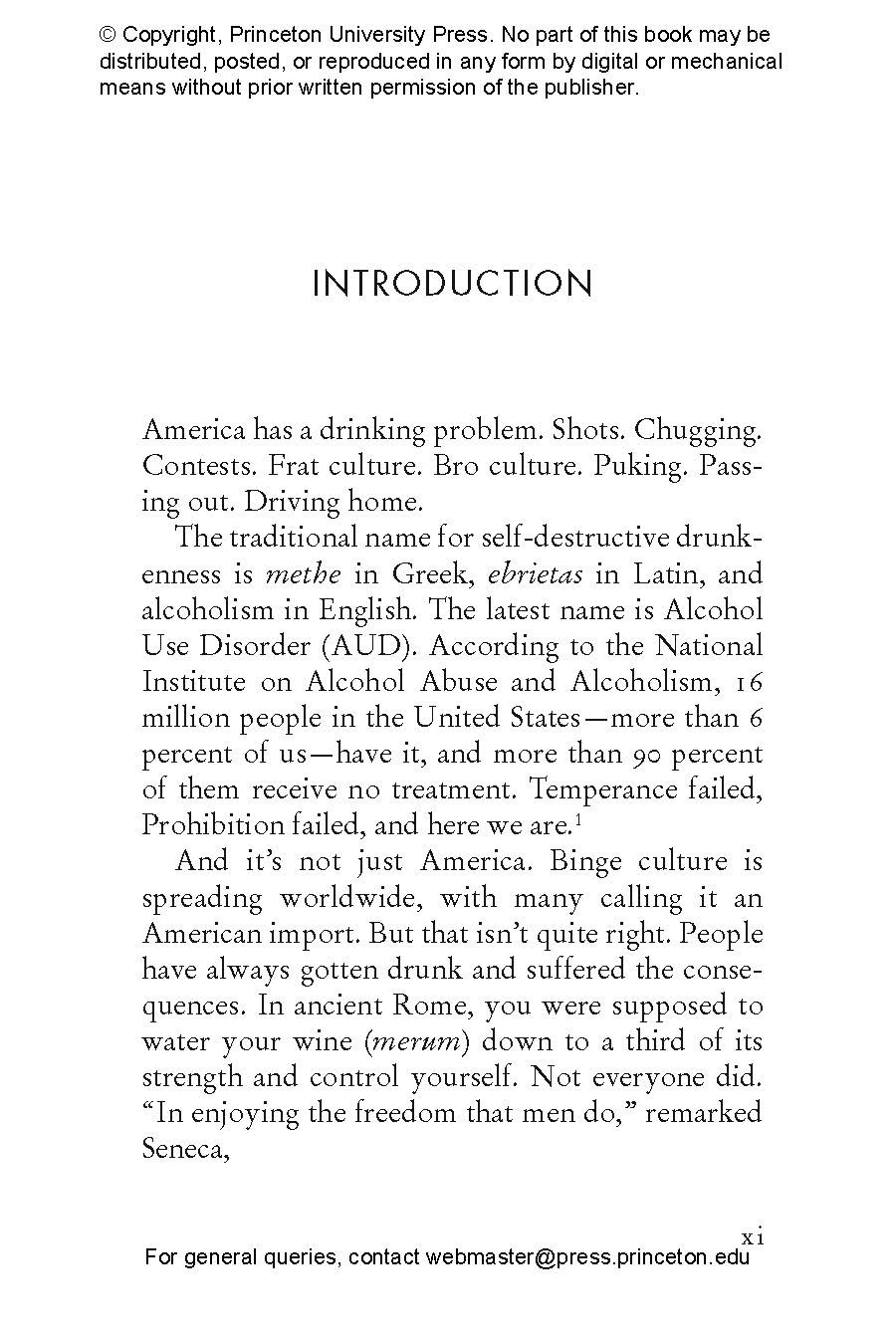 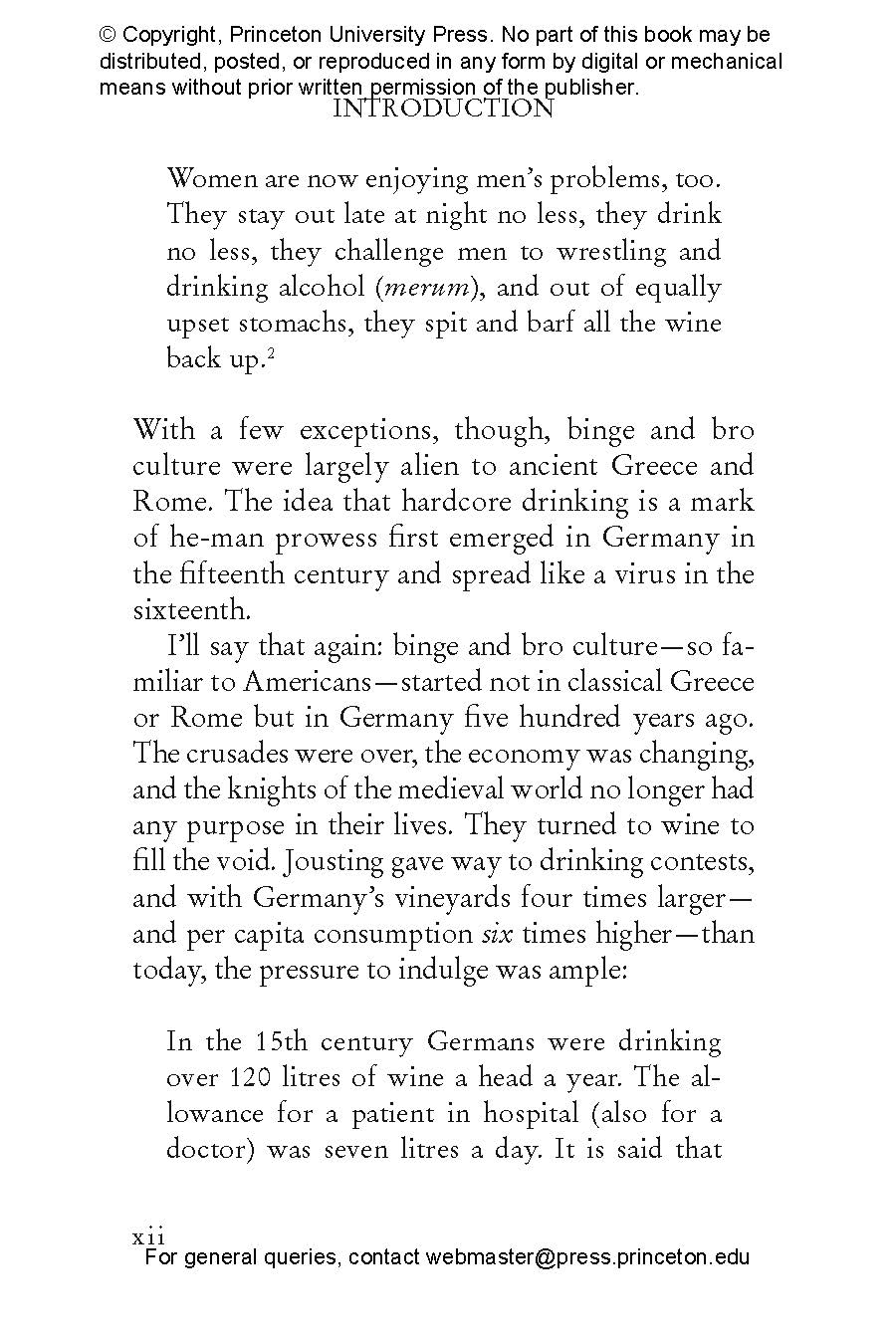 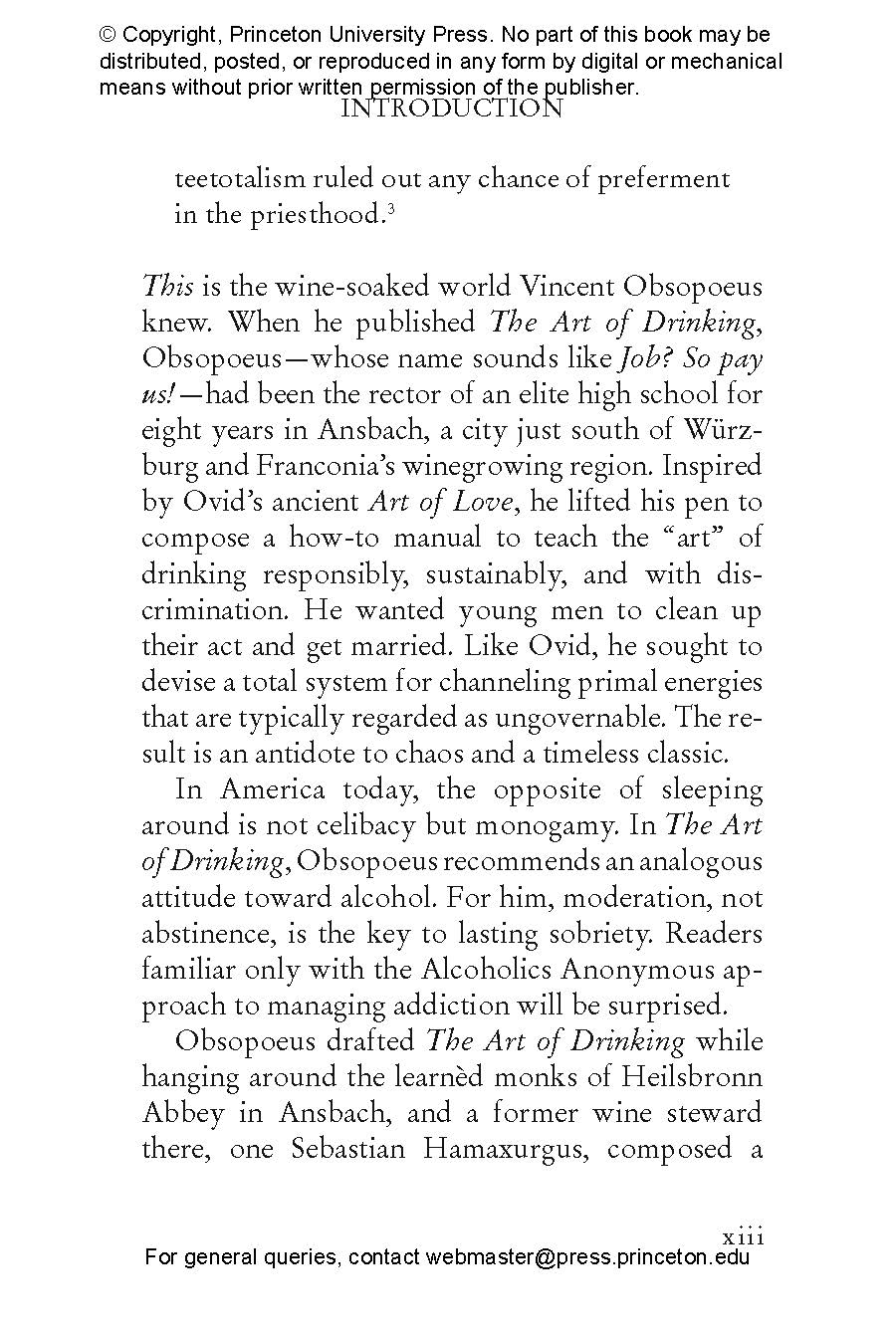 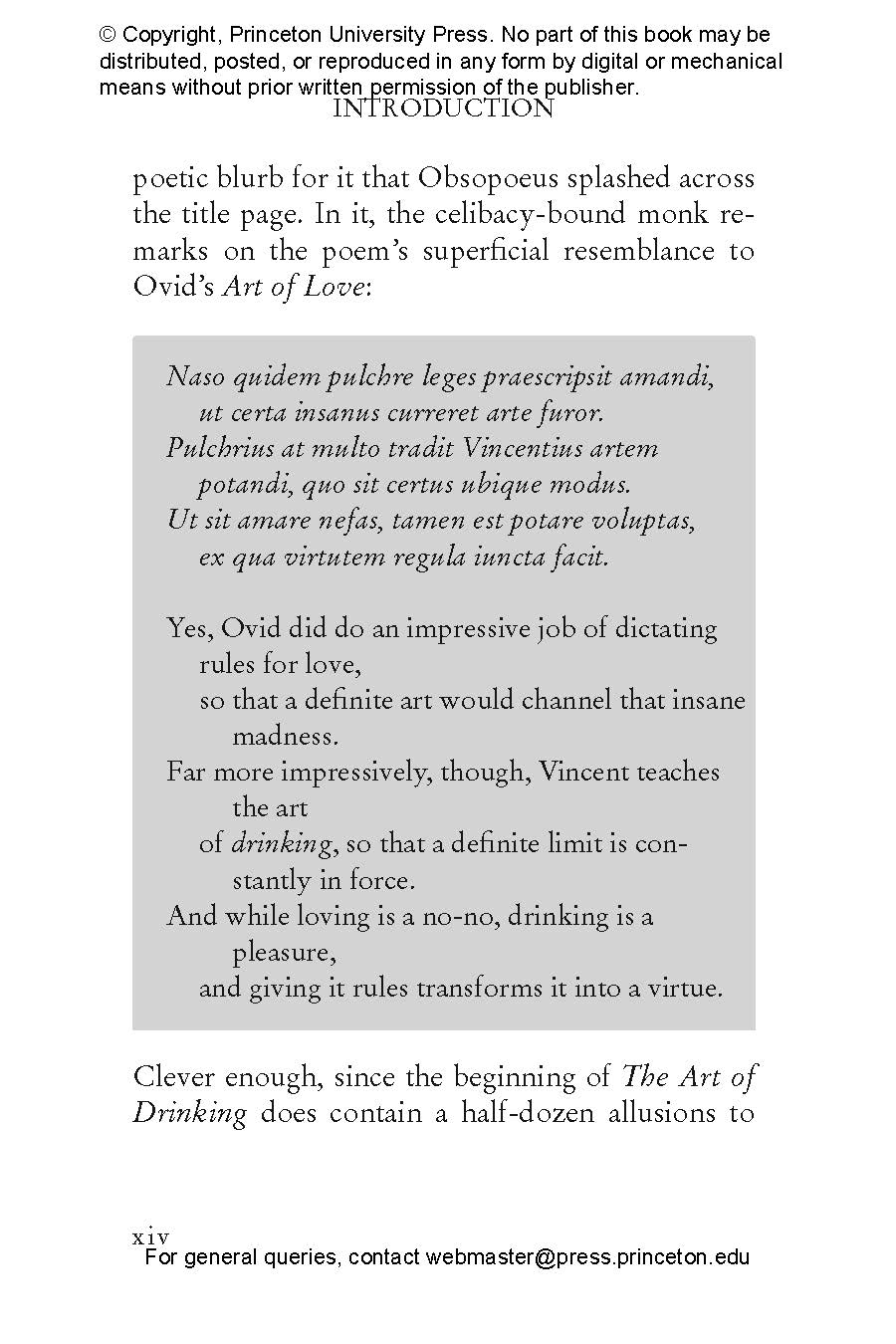 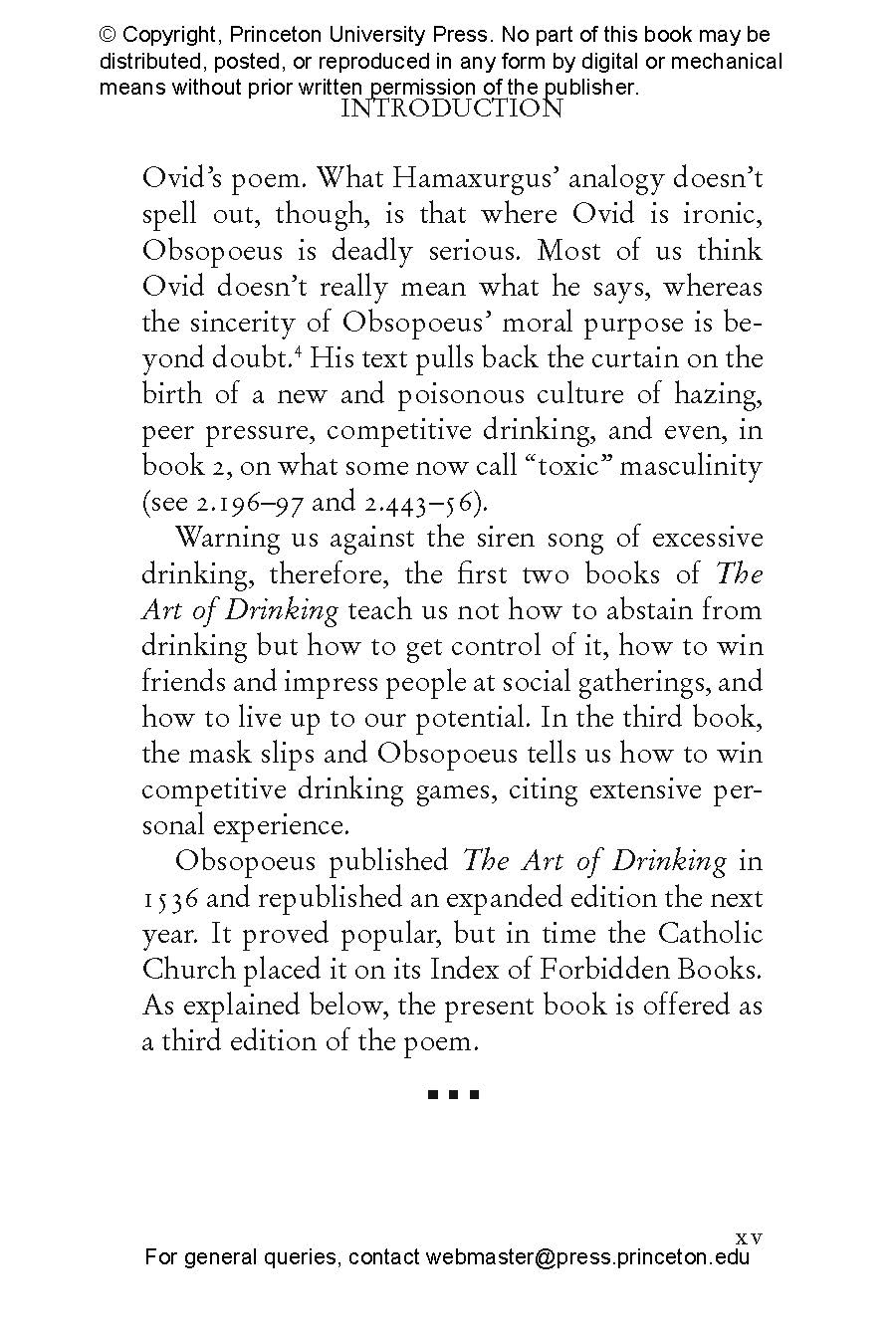 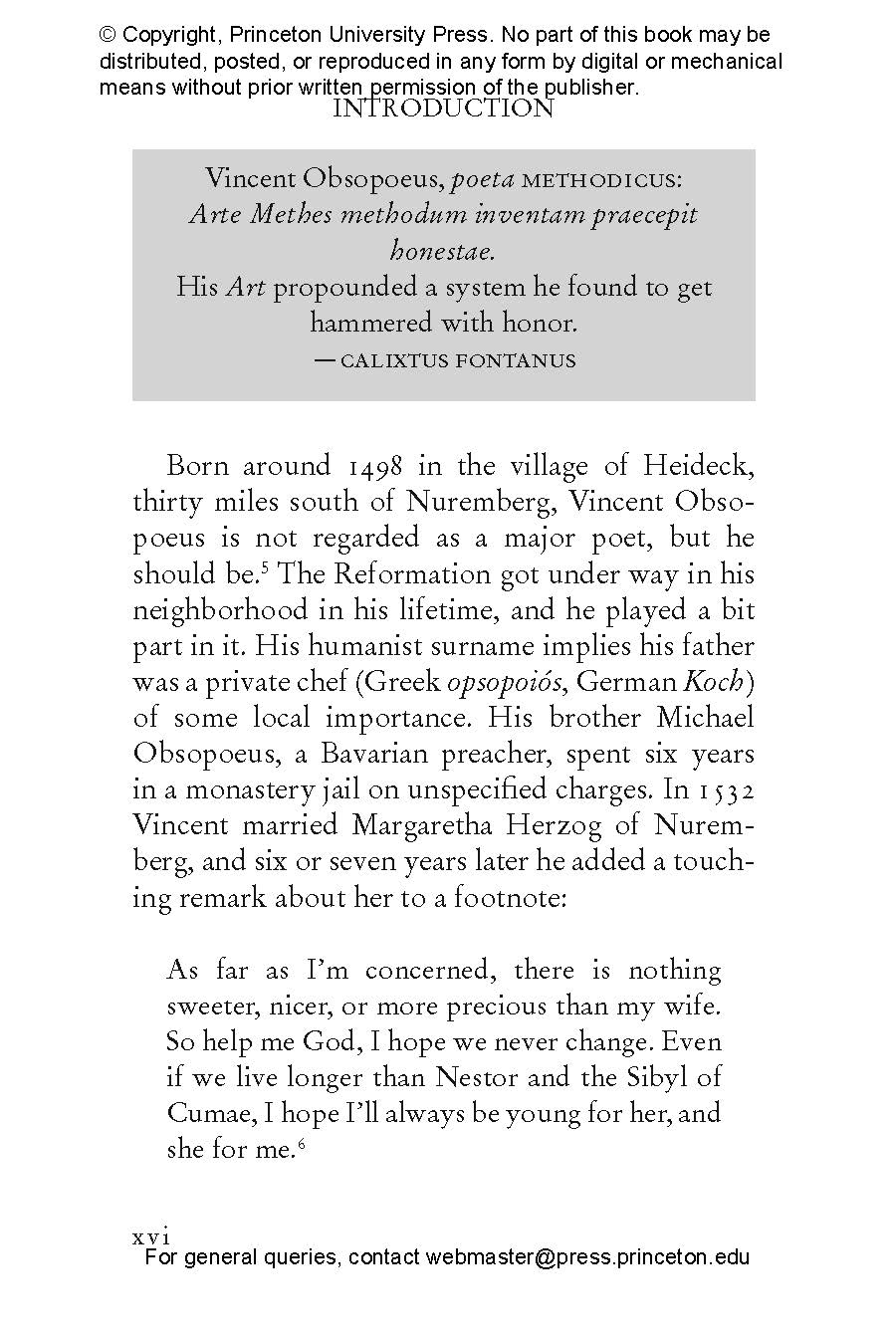 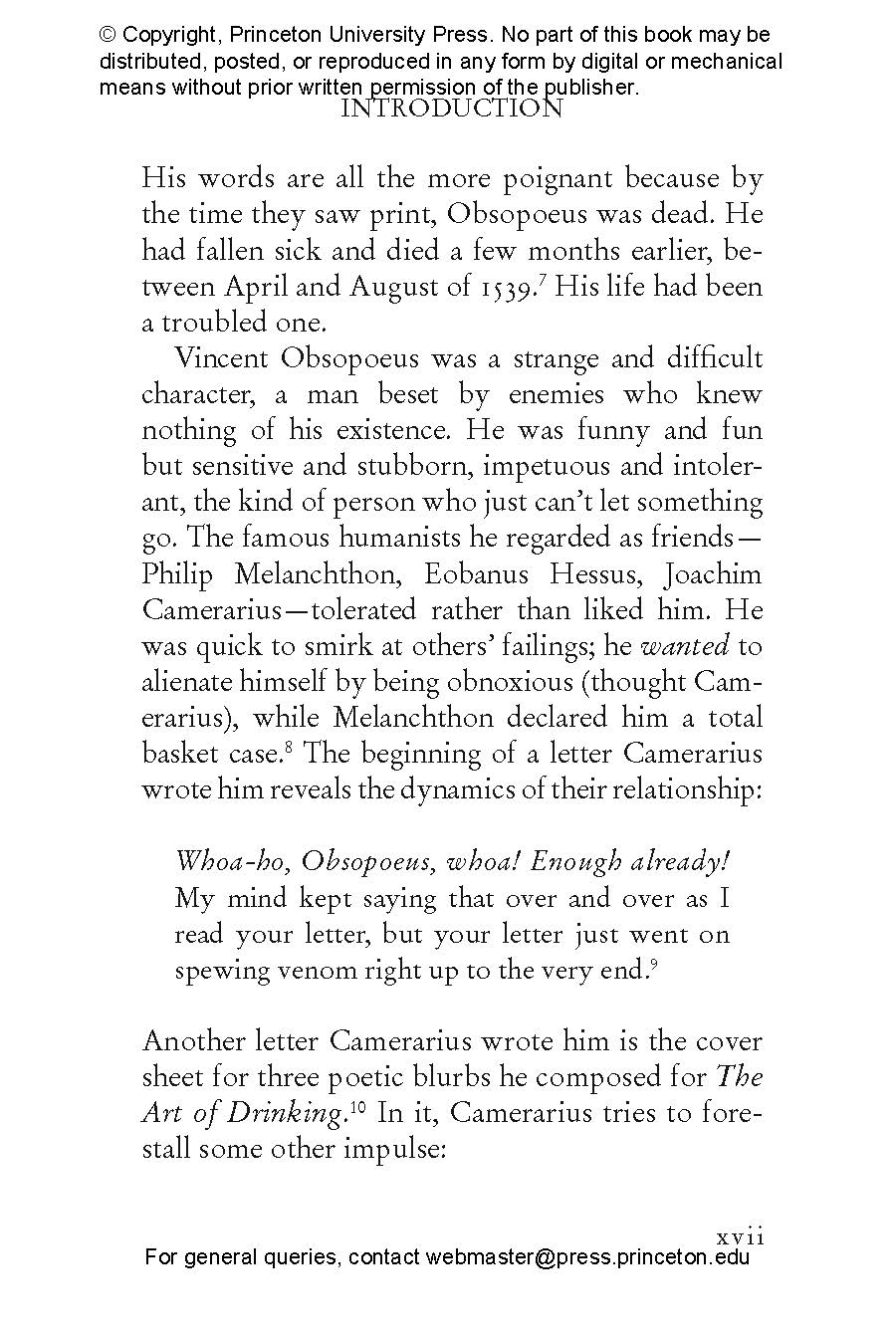 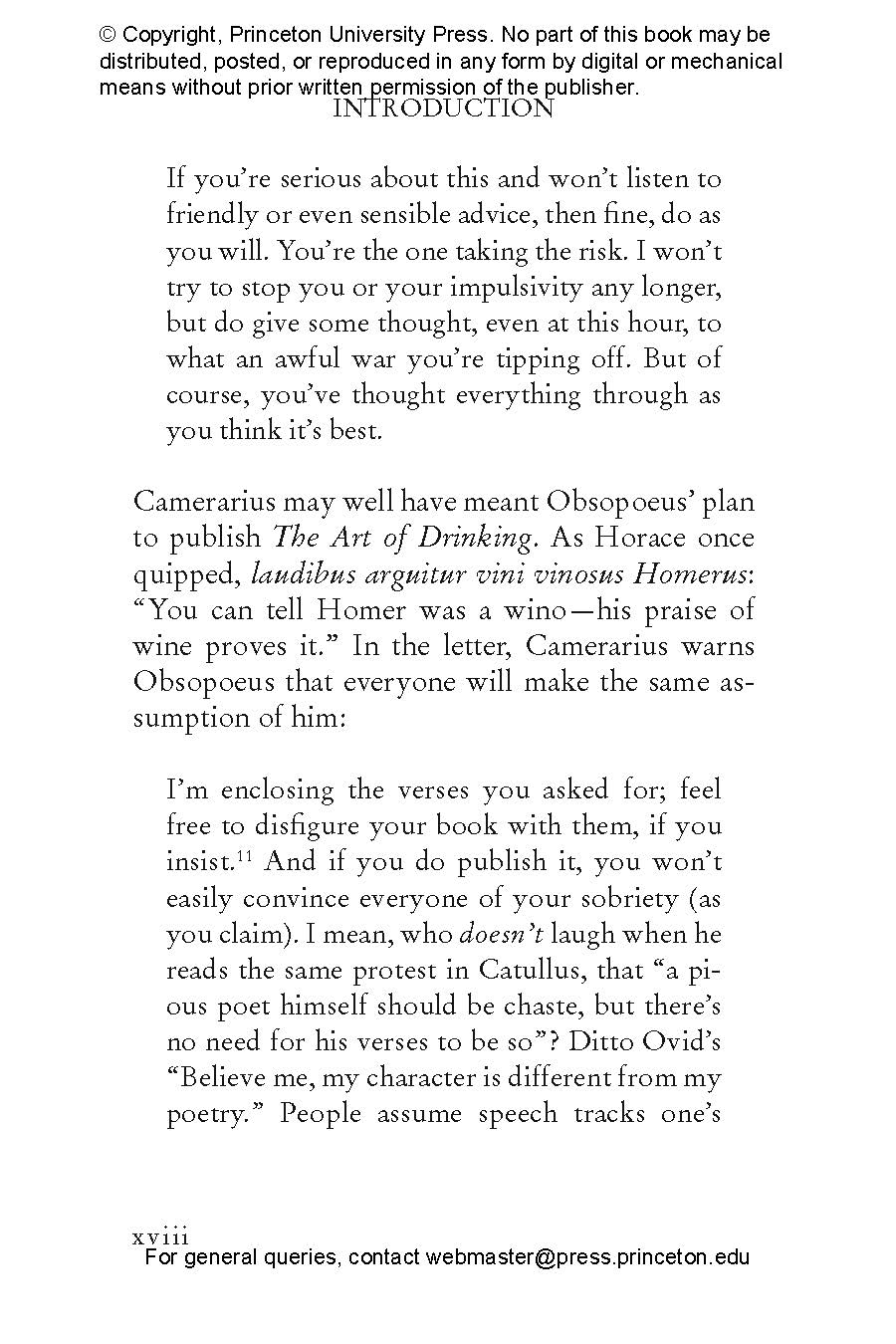 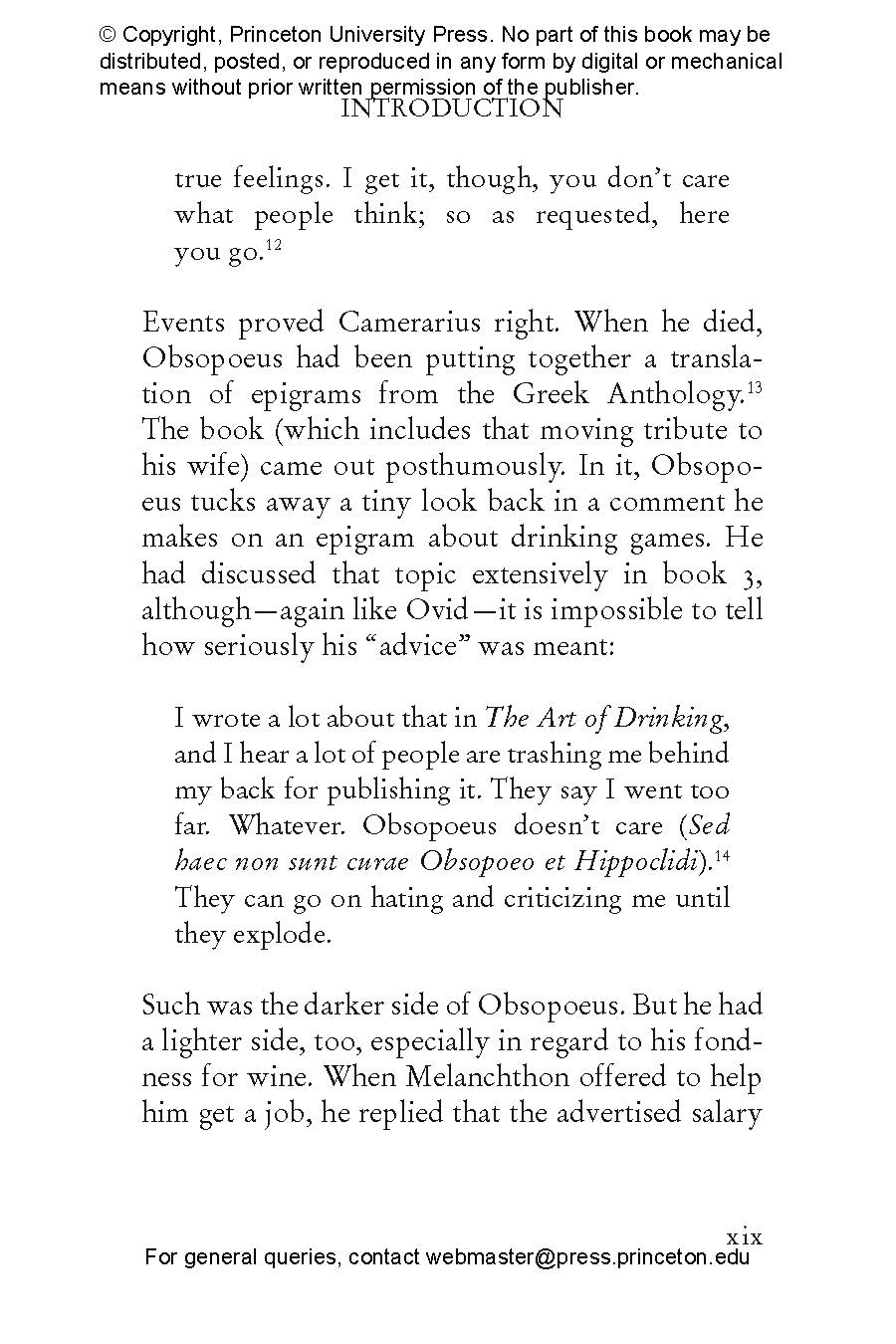 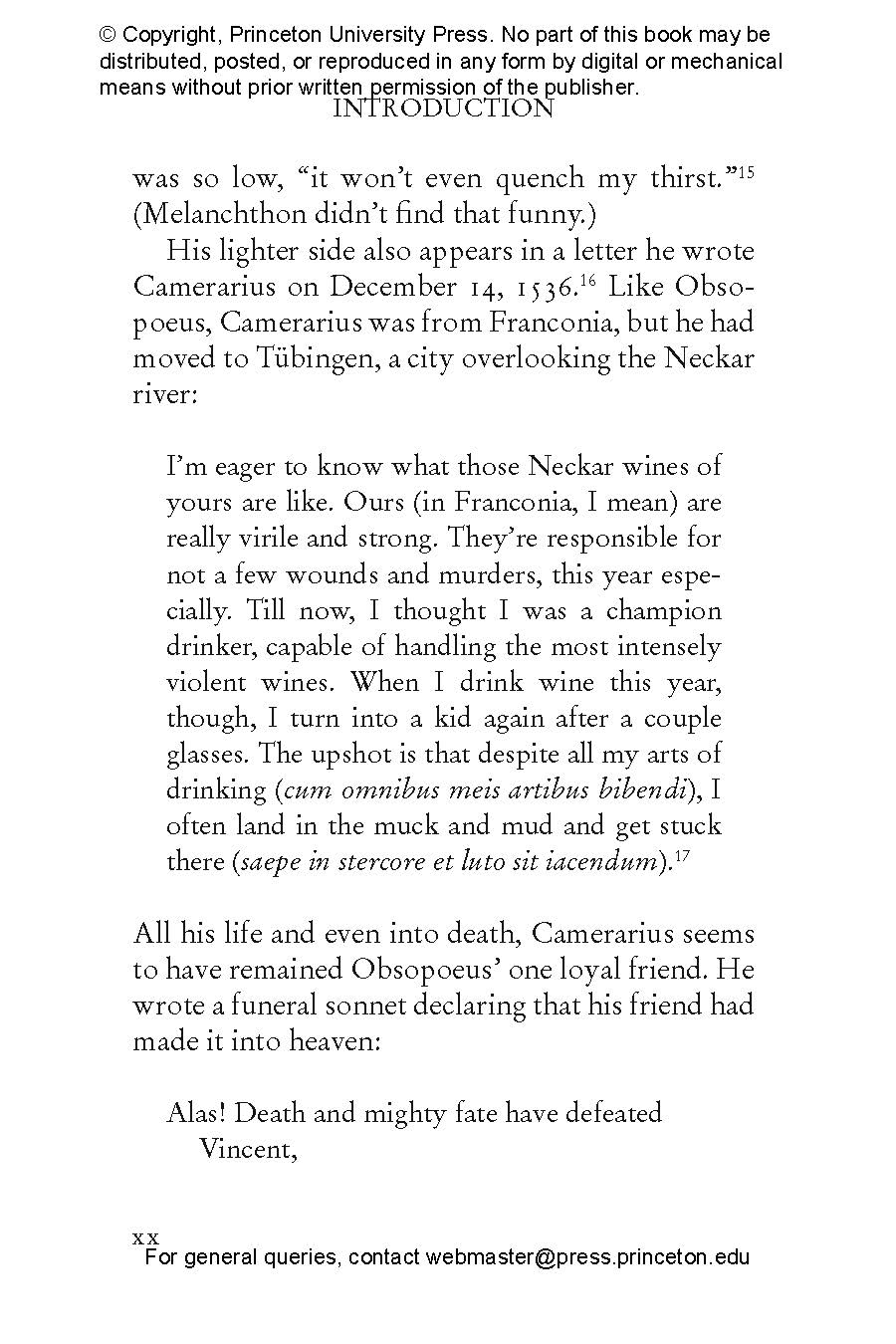 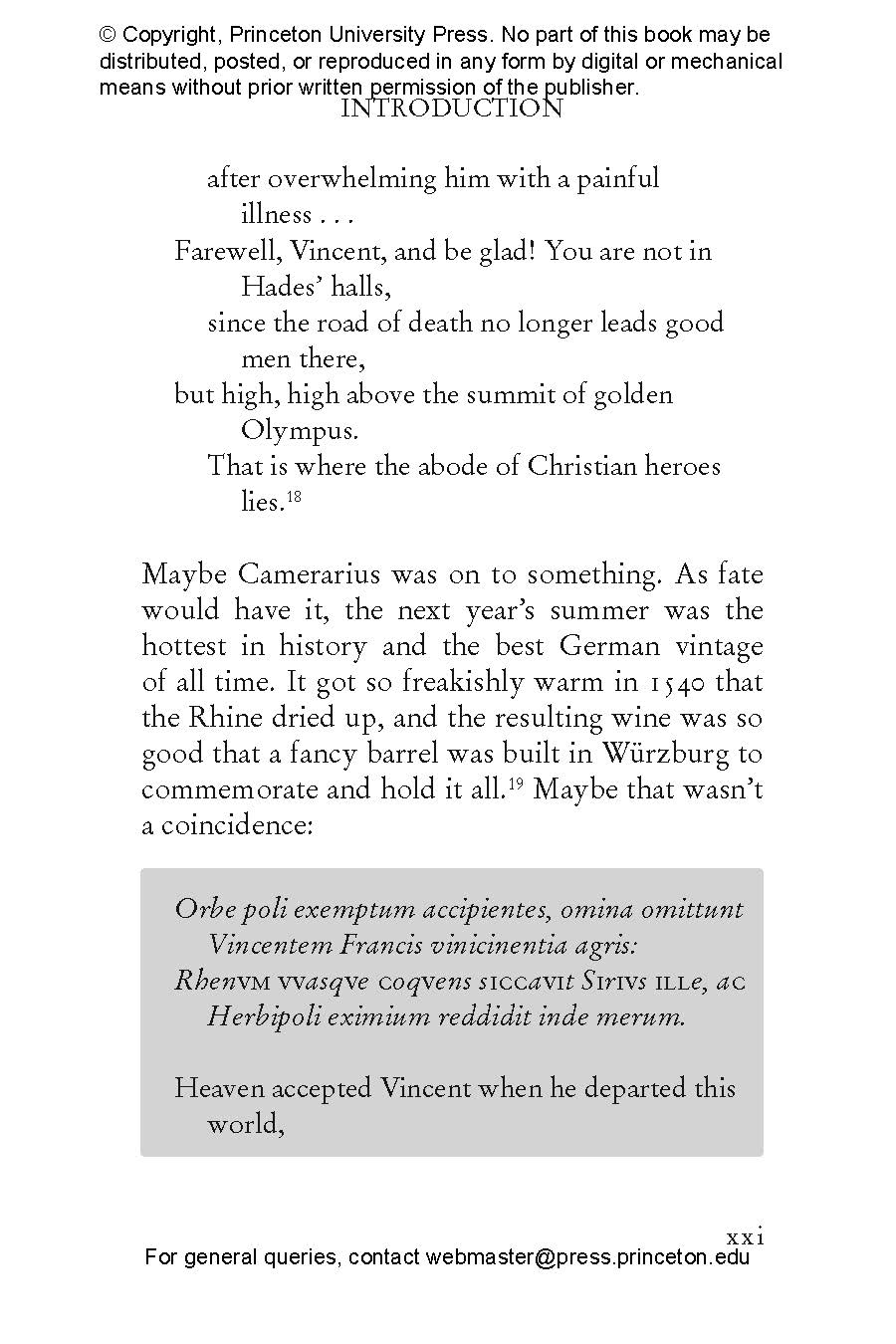 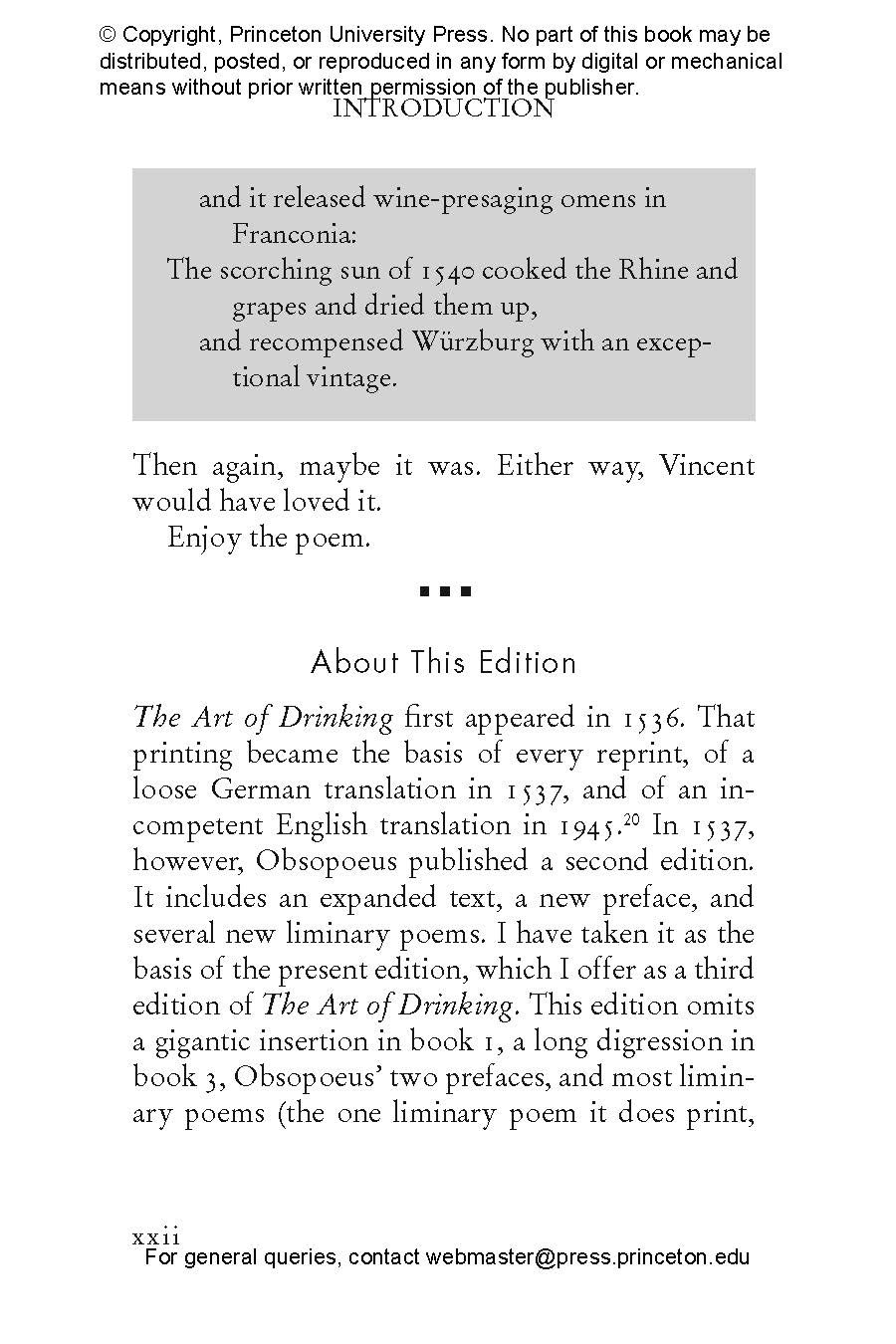 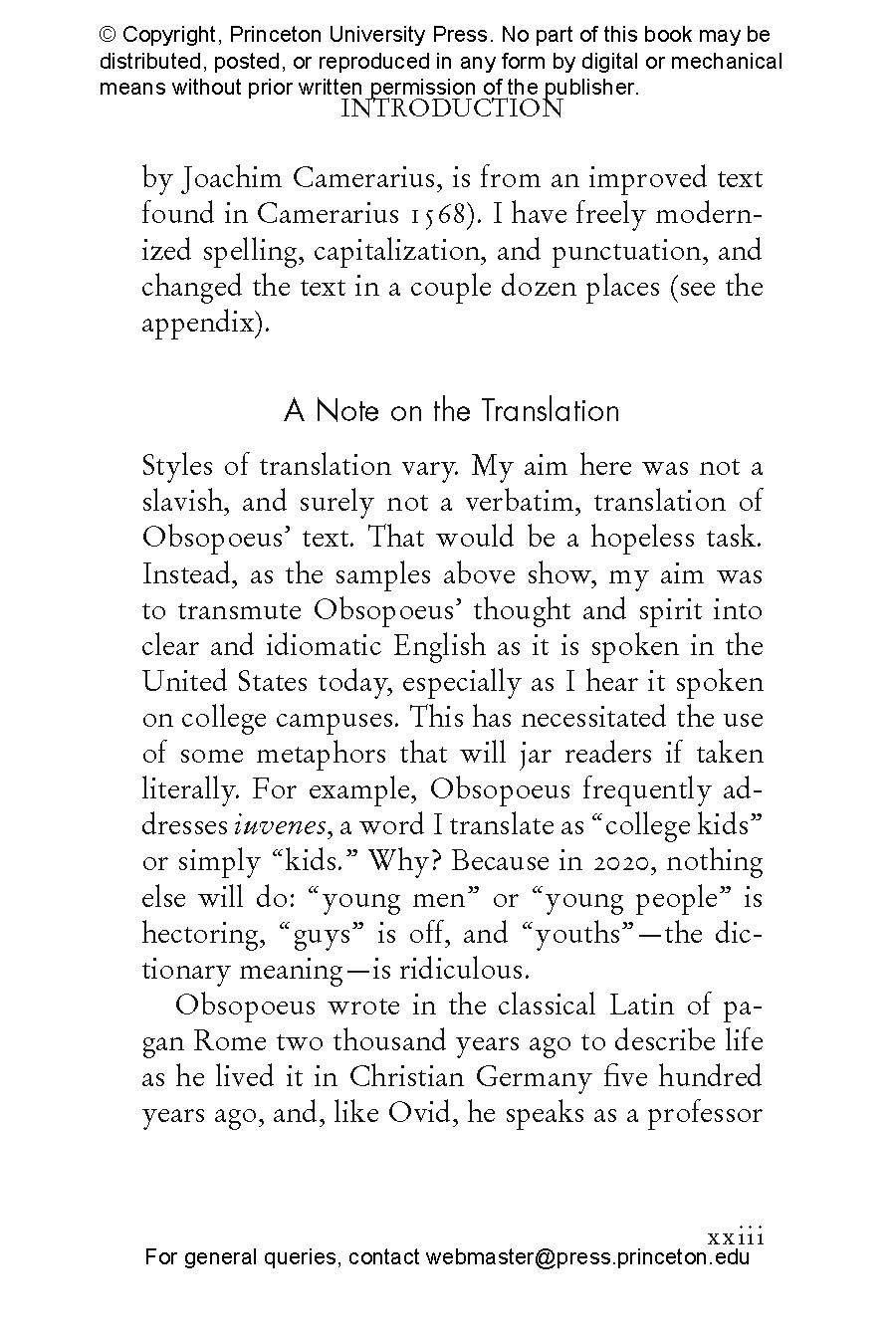 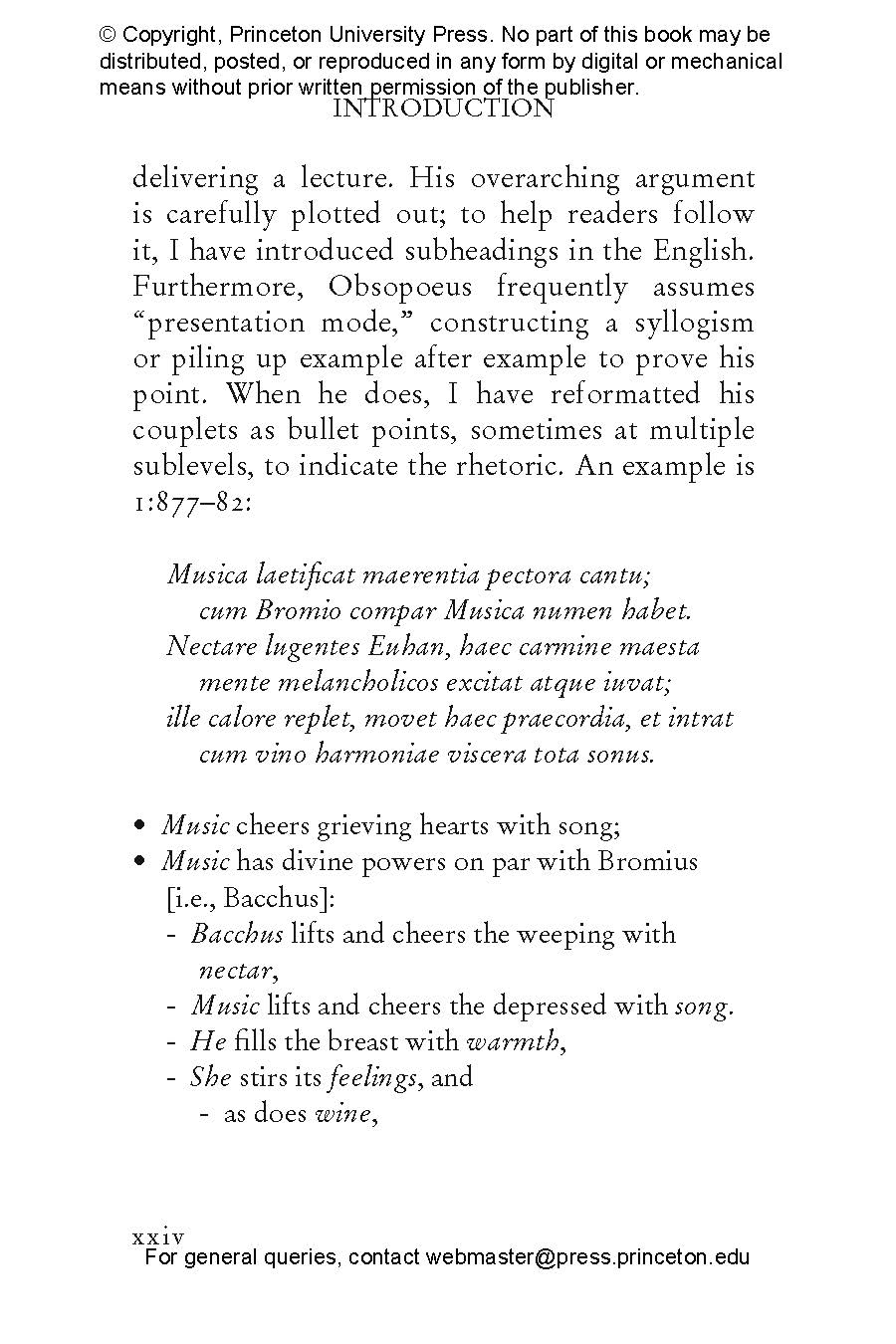 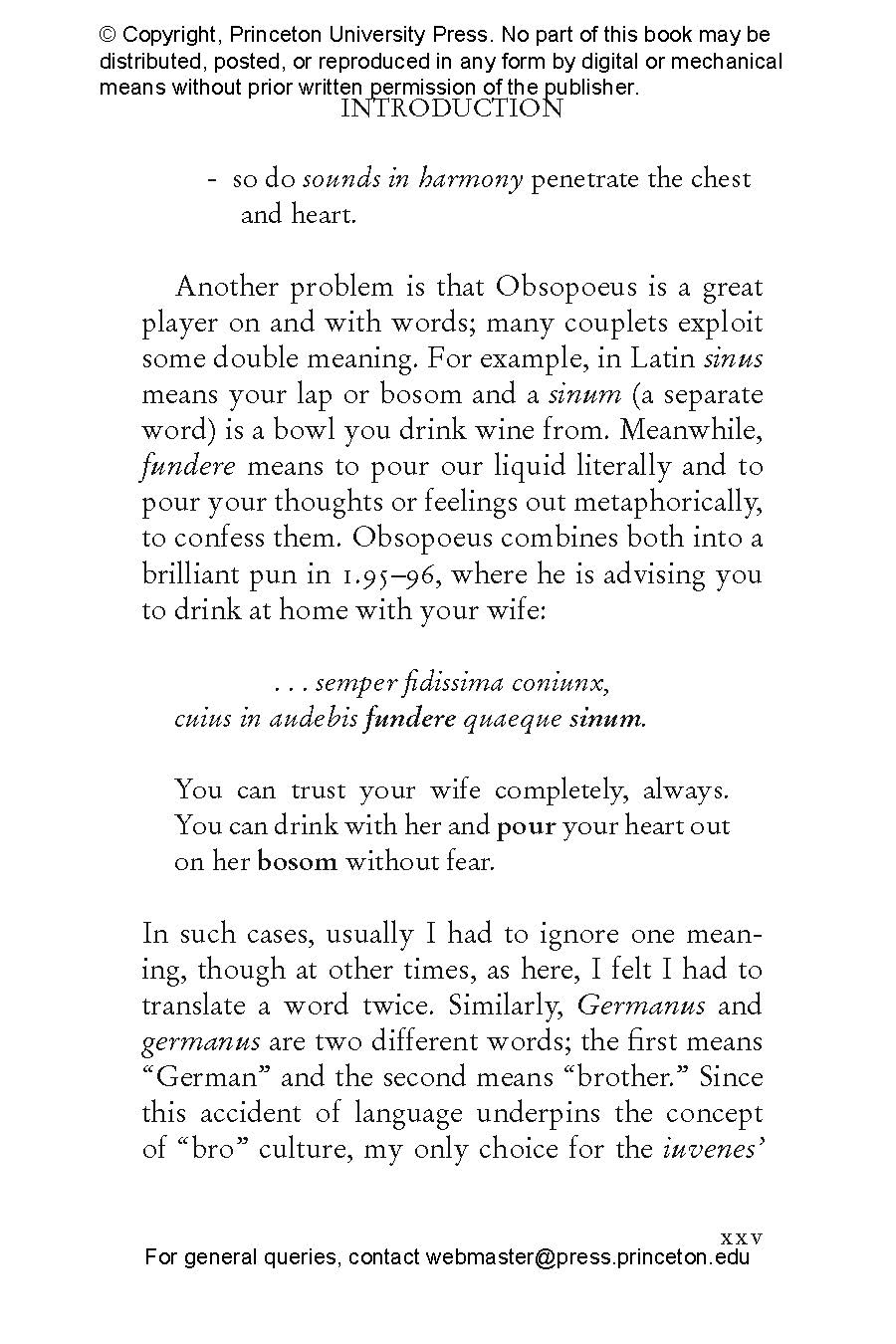 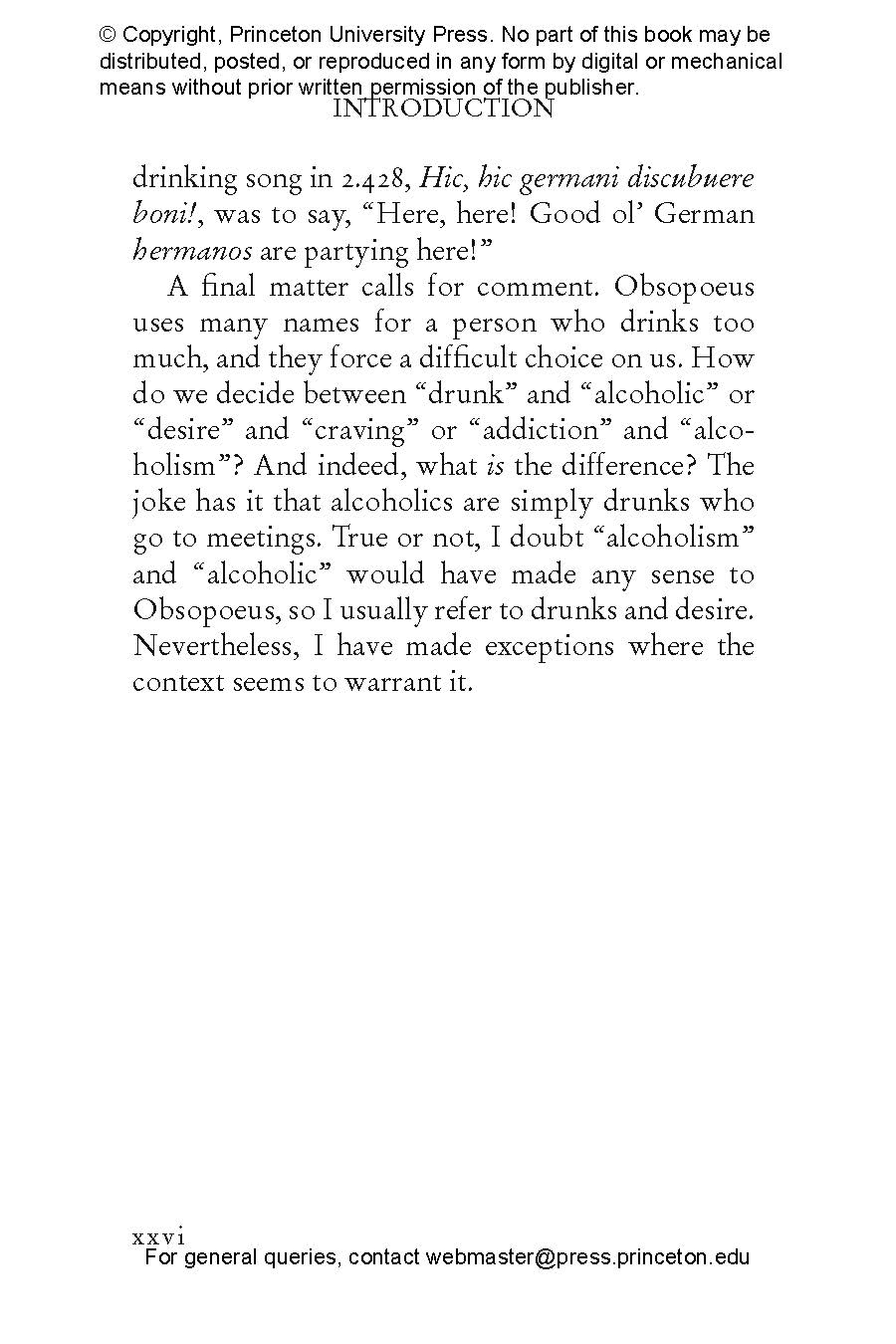 A spirited new translation of a forgotten classic, shot through with timeless wisdom 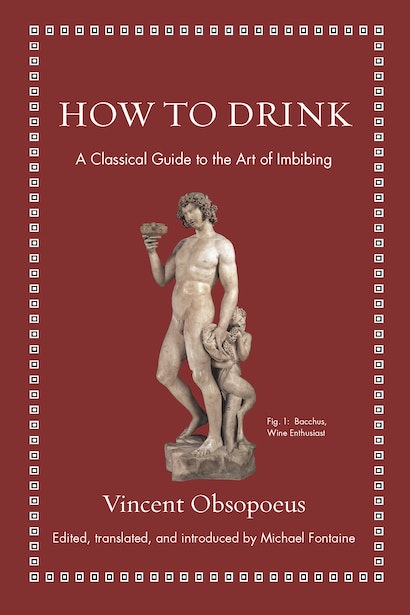 Is there an art to drinking alcohol? Can drinking ever be a virtue? The Renaissance humanist and neoclassical poet Vincent Obsopoeus (ca. 1498–1539) thought so. In the winelands of sixteenth-century Germany, he witnessed the birth of a poisonous new culture of bingeing, hazing, peer pressure, and competitive drinking. Alarmed, and inspired by the Roman poet Ovid’s Art of Love, he wrote The Art of Drinking (De Arte Bibendi) (1536), a how-to manual for drinking with pleasure and discrimination. In How to Drink, Michael Fontaine offers the first proper English translation of Obsopoeus’s text, rendering his poetry into spirited, contemporary prose and uncorking a forgotten classic that will appeal to drinkers of all kinds and (legal) ages.

Arguing that moderation, not abstinence, is the key to lasting sobriety, and that drinking can be a virtue if it is done with rules and limits, Obsopoeus teaches us how to manage our drinking, how to win friends at social gatherings, and how to give a proper toast. But he also says that drinking to excess on occasion is okay—and he even tells us how to win drinking games, citing extensive personal experience.

Complete with the original Latin on facing pages, this sparkling work is as intoxicating today as when it was first published.

"It is always good to find a new book on the shelves that regards wine with both pleasure and common sense, including a good deal about manners and drunkenness. . . . [How to Drink is] an enjoyable read and . . . makes good, genial sense at a time when wine is now being taken far too seriously as a subject to be put under a microscope rather than be sloshed into a glass."—John Mariani, Forbes

"[How to Drink is] a fetching translation . . . I recommend it, as much for its hints about drinking ‘sustainably and with discrimination’ as for its wry warnings about excess."—Roger Kimball, Spectator US

"[A] lively modern rendition . . . [How to Drink] mashes up a How to Win Friends and Influence People Under the Influence sort of self-help book, a snapshot of a binge-drinking culture 500 years ago and a personal airing of grievances through the lens of one entertaining, wildly self-contradictory and extremely cantankerous tutor."—Ben O’Donnell, WineSpectator.com

"If you can escape the world for a couple of days, bring this delightful book with you and cue up your Pandora 'Circa 1500' playlist . . . a balance of elegance and boisterousness."—Lana Bortolot, Forbes

"Fontaine has done a good job in resurrecting an amusing enough oeuvre for those who enjoy exploring such highways and byways."—Peter Jones, Classics for All

"[How to Drink] serves as relevant social commentary for today, railing, with wit and humor, against toxic masculinity and overindulgence while providing advice on how to win drinking games. It’s a great addition to your bartending library."—Matt Kettman, Santa Barbara Independent

"I found this book fascinating . . . I recommend How to Drink for anyone who enjoys history, the social aspects of alcohol, and the fact that some things never seem to change through the ages!"—TheBrewholder.com

"[How to Drink] is a witty, entertaining and well produced book, whose editor/translator is clearly well-matched to the subject-matter: in Fontaine’s capable hands, Obsopoeus is anything but an acquired taste."—Gary Vos, The Journal of Classics Teaching

"This is a fun little book; it is also a scholarly edition of a little-known sixteenth-century didactic poem, accompanied by an eminently readable translation—an unusual and commendable combination. . . . We should be thankful to Michael Fontaine for undertaking this edition and translation, and to Princeton University Press for publishing it. . . . Obsopoeus might well be proud of how his poem has been presented to twenty-first-century readers."—David Money, Neo-Latin News

"Spirited into the twenty-first century in Fontaine's witty translation, these entertaining tips should be savored over your favorite tipple."—Daisy Dunn, author of The Shadow of Vesuvius: A Life of Pliny

"How to Drink is a delight—an amusing and at points hilarious book that is also a deeply learned, and occasionally sobering, introduction to ancient drinking customs and their modern parallels."—James Tatum, Dartmouth College

"I'm grateful to be introduced to Vincent Obsopoeus and his art of drinking, and I hope many other readers will be too! This is a lively, fun translation."—Julia D. Hejduk, Baylor University

"Wine and other fermented beverages have been the boon and bane of human existence from the beginning. 'Barbarian' Europe long had an appetite for bingeing, as the more 'civilized' Greeks and Romans were quick to point out. This compelling book offers timeless advice, inspired by classical wisdom, for drinking responsibly from a Renaissance poet in Germany, where the wine was flowing in the universities and people reveled in the drink, sometimes to their chagrin."—Patrick E. McGovern, author of Ancient Wine: The Search for the Origins of Viniculture 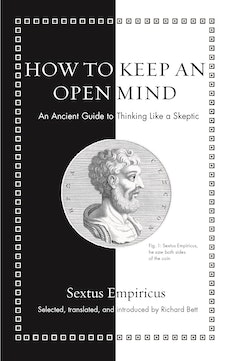 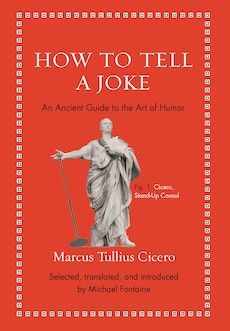