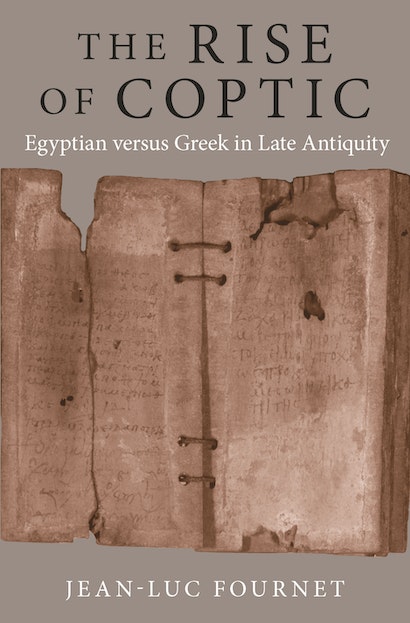 Coptic emerged as the written form of the Egyptian language in the third century, when Greek was still the official language in Egypt. By the time of the Arab conquest of Egypt in 641, Coptic had almost achieved official status, but only after an unusually prolonged period of stagnation. Jean-Luc Fournet traces this complex history, showing how the rise of Coptic took place amid profound cultural, religious, and political changes in late antiquity.

For some three hundred years after its introduction into the written culture of Egypt, Coptic was limited to biblical translation and private and monastic correspondence, while Greek retained its monopoly on administrative, legal, and literary writing. This changed during the sixth century, when Coptic began to penetrate domains that were once closed to it, such as literature, liturgy, regulated transactions between individuals, and communications between the state and its subjects. Fournet examines the reasons for Coptic’s late development as a competing language—which was unlike what happened with other vernacular languages in Near Eastern Greek-speaking societies—and explains why Coptic eventually succeeded in being recognized with Greek as an official language.

Incisively written and rich with insights, The Rise of Coptic draws on a wealth of archival evidence to shed new light on the role of monasticism in the growing use of Coptic before the Arab conquest.

Jean-Luc Fournet is the Chair of Written Culture in Late Antiquity and Byzantine Papyrology at the Collège de France in Paris.

"This short volume showcases an exemplary combination of papyrological accuracy, attention to detail, and an eye for the broader context. . . the book will become standard on the subject and indispensable for anyone interested in the history of late antique Egypt or multilingualism in the Roman world."—Ágnes T. Mihálykó, Plekos

"In this outstanding and original book, Fournet provides a general synthesis on the 'invention' of Coptic and its progressive development until its recognition as an official language."—Alain Delattre, Université libre de Bruxelles

"A major contribution. Fournet is the first to thoroughly explore the paradox of Coptic as a creation of Hellenized Egyptian intellectual circles. The linguistic-historical panorama he provides is wide and coherent, and his philological method is impeccable."—Anne Boud'hors, coeditor of Monastic Estates in Late Antique and Early Islamic Egypt