The most comprehensive collection of Einstein quotations ever published 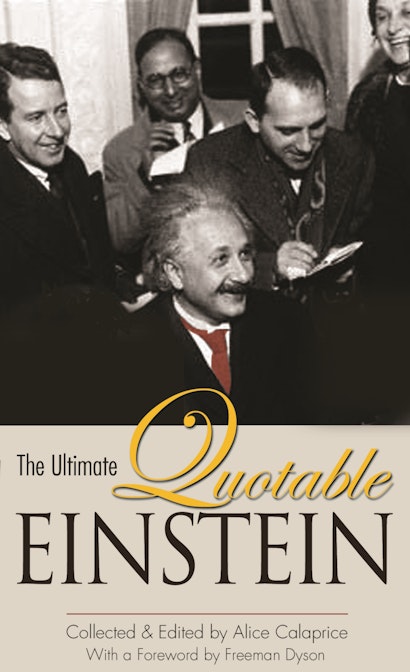 The Ultimate Quotable Einstein features 400 additional quotes, bringing the total to roughly 1,600 in all. This ultimate edition includes new sections—”On and to Children,” “On Race and Prejudice,” and “Einstein’s Verses: A Small Selection”—as well as a chronology of Einstein’s life and accomplishments, Freeman Dyson’s authoritative foreword, and new commentary by Alice Calaprice.

In The Ultimate Quotable Einstein, readers will also find quotes by others about Einstein along with quotes attributed to him. Every quotation in this informative and entertaining collection is fully documented, and Calaprice has carefully selected new photographs and cartoons to introduce each section.

"All of us who lack Einstein’s intellectual and spiritual gifts owe a debt of gratitude to Princeton University Press for having humanized him in this innovative way."—Timothy Ferris, New York Times

"This fascinating book reveals Einstein as a fully rounded human, with both a tender and a darker, more brooding side."—Physics World

"A compelling selection. . . . Students of Einstein's work and life, who are familiar with these contexts, can find many embellishments to their research, and often puzzling contrary notes to customary portrayals of his stance on issues ranging from Zionism to domestic life."—Choice