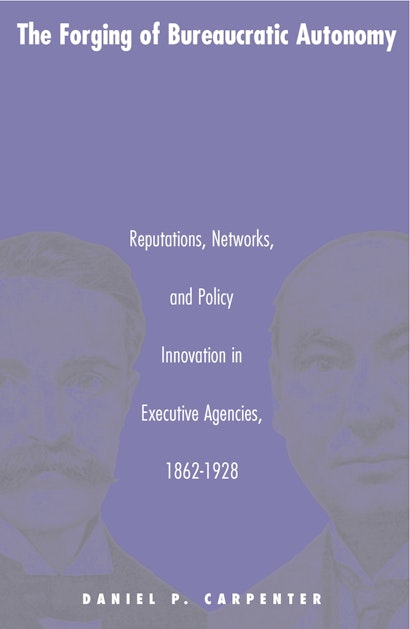 Until now political scientists have devoted little attention to the origins of American bureaucracy and the relationship between bureaucratic and interest group politics. In this pioneering book, Daniel Carpenter contributes to our understanding of institutions by presenting a unified study of bureaucratic autonomy in democratic regimes. He focuses on the emergence of bureaucratic policy innovation in the United States during the Progressive Era, asking why the Post Office Department and the Department of Agriculture became politically independent authors of new policy and why the Interior Department did not. To explain these developments, Carpenter offers a new theory of bureaucratic autonomy grounded in organization theory, rational choice models, and network concepts.


According to the author, bureaucracies with unique goals achieve autonomy when their middle-level officials establish reputations among diverse coalitions for effectively providing unique services. These coalitions enable agencies to resist political control and make it costly for politicians to ignore the agencies’ ideas. Carpenter assesses his argument through a highly innovative combination of historical narratives, statistical analyses, counterfactuals, and carefully structured policy comparisons. Along the way, he reinterprets the rise of national food and drug regulation, Comstockery and the Progressive anti-vice movement, the emergence of American conservation policy, the ascent of the farm lobby, the creation of postal savings banks and free rural mail delivery, and even the congressional Cannon Revolt of 1910.

"Carpenter's book is intellectually arresting—weaving quantitative and qualitative empiricism through an impressive array of theoretical propositions toward an attractive theory of bureaucratic autonomy in the administrative state . . . . [A]dmirably successful in adding to our narrative of the development of the American administrative state."—Anthony Bertelli, Public Administration Review

"The Forging of Bureaucratic Autonomy is a major work sure to influence future understandings of progressivism, state-building, and American political development. Carpenter delves into the highly variable world of bureaucratic entrepreneurship and innovation in organization to explain the emergence of scattered pockets of administrative autonomy within the executive branch of American government. His carefully crafted analysis of the conditions under which administrators have gained control over the political authorities that ostensibly control them presents a formidable challenge to the assumptions of political scientists, and it should prompt some equally careful rethinking of the operations of American democracy more generally."—Stephen Skowronek, Yale University

"Although we tend to discuss the strength, or weakness, of state autonomy as though it were the same for every agency, the fact of the matter is that autonomy varies considerably from agency to agency. In this excellent book, Daniel Carpenter is among the first to make this observation and explore its implications."—Graham K. Wilson, University of Wisconsin-Madison

"Whether we regard the modern state as fair as Athena, stepping fully formed from the brow of Zeus, or as foul as Frankenstein, sutured on a scientist's table, there had to be a time of quickening when the limbs began to twitch and the brain began to spark. In a splendid reinterpretation of the classic period of American state formation, Dan Carpenter demonstrates that a self-conscious mentality emerged because career bureaucratic officials created overlapping networks between their agencies and forged public reputations that secured support from the citizenry. Thus freed them from the influence of political parties, these officials then turned on the very politicians who had created them."—Richard Bensel, Cornell University