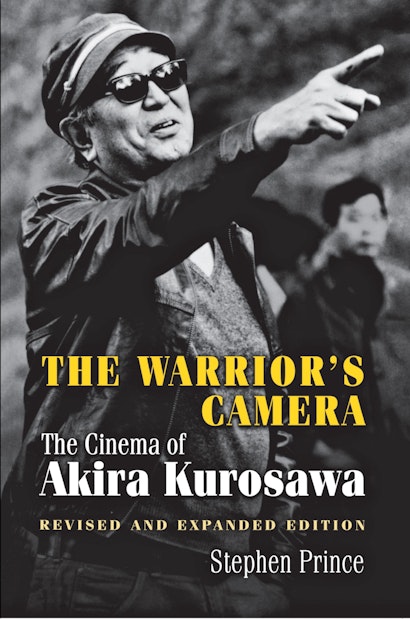 The Japanese film director Akira Kurosawa, who died at the age of 88, has been internationally acclaimed as a giant of world cinema. Rashomon, which won both the Venice Film Festival’s grand prize and an Academy Award for best foreign-language film, helped ignite Western interest in the Japanese cinema. Seven Samurai and Yojimbo remain enormously popular both in Japan and abroad. In this newly revised and expanded edition of his study of Kurosawa’s films, Stephen Prince provides two new chapters that examine Kurosawa’s remaining films, placing him in the context of cinema history. Prince also discusses how Kurosawa furnished a template for some well-known Hollywood directors, including Martin Scorsese, Steven Spielberg, and George Lucas.


Providing a new and comprehensive look at this master filmmaker, The Warrior’s Camera probes the complex visual structure of Kurosawa’s work. The book shows how Kurosawa attempted to symbolize on film a course of national development for post-war Japan, and it traces the ways that he tied his social visions to a dynamic system of visual and narrative forms. The author analyzes Kurosawa’s entire career and places the films in context by drawing on the director’s autobiography — a fascinating work that presents Kurosawa as a Kurosawa character and the story of his life as the kind of spiritual odyssey witnessed so often in his films. After examining the development of Kurosawa’s visual style in his early work, The Warrior’s Camera explains how he used this style in subsequent films to forge a politically committed model of filmmaking. It then demonstrates how the collapse of Kurosawa’s efforts to participate as a filmmaker in the tasks of social reconstruction led to the very different cinematic style evident in his most recent films, works of pessimism that view the world as resistant to change.

Stephen Prince is Associate Professor of Communication Studies at Virginia Tech. His recent books include Savage Cinema: Sam Peckinpah and the Rise of Ultraviolent Movies.

"The Warrior's Camera is not only a thoughtful, stimulating and rigorous study but also a major addition to both Kurosawa and Japanese film scholarship. Its examination of the intersection of self, culture, and history is meticulously done; its extended close analysis of individual films, especially Ikiru, Yojimbo, High and Low, and Red Beard, is superbly confident."—Film Quarterly

"[Prince's] close analysis of the films generates many superb insights. This work is accessible, nicely illustrated and an essential text about a great subject."—Choice