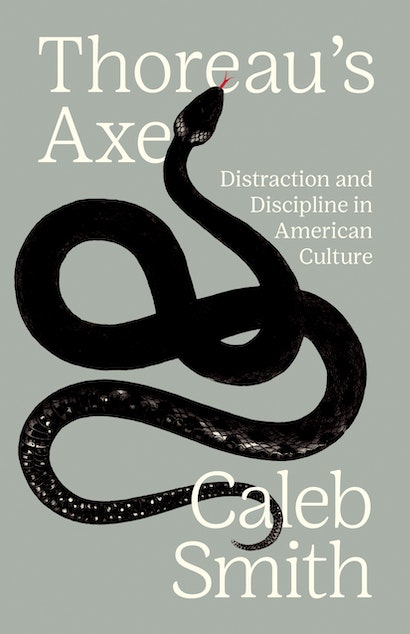 Today, we’re driven to distraction, our attention overwhelmed by the many demands upon it—most of which emanate from our beeping and blinking digital devices. This may seem like a decidedly twenty-first-century problem, but, as Caleb Smith shows in this elegantly written, meditative work, distraction was also a serious concern in American culture two centuries ago. In Thoreau’s Axe, Smith explores the strange, beautiful archives of the nineteenth-century attention revival—from a Protestant minister’s warning against frivolous thoughts to Thoreau’s reflections on wakefulness at Walden Pond. Smith examines how Americans came to embrace attention, mindfulness, and other ways of being “spiritual but not religious,” and how older Christian ideas about temptation and spiritual devotion endure in our modern ideas about distraction and attention.

Smith explains that nineteenth-century worries over attention developed in response to what were seen as the damaging mental effects of new technologies and economic systems. A “wandering mind,” once diagnosed, was in need of therapy or rehabilitation. Modeling his text after nineteenth-century books of devotion, Smith offers close readings of twenty-eight short passages about attention. Considering social reformers who designed moral training for the masses, religious leaders who organized Christian revivals, and spiritual seekers like Thoreau who experimented with regimens of simplified living and transcendental mysticism, Smith shows how disciplines of attention became the spiritual exercises of a distracted age.

Caleb Smith is professor of English at Yale University. He is the author of The Prison and the American Imagination and The Oracle and the Curse and the editor of The Life and the Adventures of a Haunted Convict. His writing has appeared in the Los Angeles Review of Books, n+1, and other publications.

“In Thoreau’s Axe, Caleb Smith is persuasively skeptical about the ways that concepts of attention and distraction have been conscripted by moralizing agendas. But this is ultimately a book of devotion that invites us—in the marrow of its sentences, and the electricity of its curiosity—to see devotion in a new way: as the act of reclaiming attention. By excavating strange affinities between rebellion and surrender, these provocations ultimately resonate far beyond their particular objects of inquiry, suggesting that perhaps we can find succor in seductions stranger than we’d ever imagined, in errands that surprise us, and in acts of self-composure that end up rearranging our sight.”—Leslie Jamison, New York Times-bestselling author of The Empathy Exams

“Thoreau’s Axe is an elegantly written meditation on how a medicine can also be a poison. Smith shows us that our concern with attention and how to manage it has a much longer backstory than we might expect, and that the disciplining of our attention can be at once a technique of domination and a means of liberation.”—Emily Ogden, author of On Not Knowing: How to Love and Other Essays

“Thoreau’s Axe is a compelling and captivating book of criticism, wholly original in its conception. It is learned and surprising in its tending to the archive and a line-by-line pleasure to read, marked by a simmering minimalism that is part Lydia Davis with hints of Cormac McCarthy. This is a gorgeous new work.”—John Lardas Modern, author of Neuromatic: Or, A Particular History of Religion and the Brain