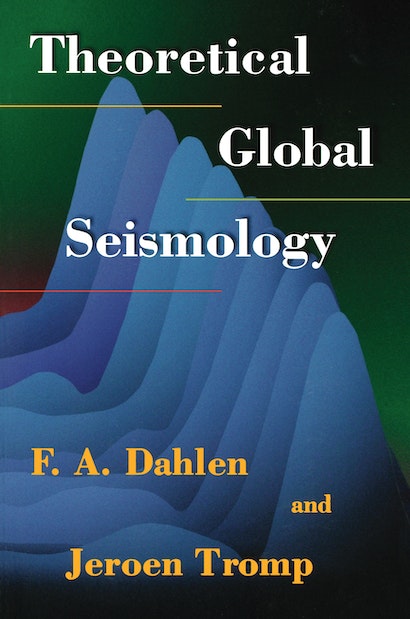 After every major earthquake, the Earth rings like a bell for several days. These free oscillations of the Earth and the related propagating body and surface waves are routinely detected at broad-band seismographic stations around the world. In this book, F. A. Dahlen and Jeroen Tromp present an advanced theoretical treatment of global seismology, describing the normal-mode, body-wave, and surface-wave methods employed in the determination of the Earth’s three-dimensional internal structure and the source mechanisms of earthquakes. The authors provide a survey of both the history of global seismological research and the major theoretical and observational advances made in the past decade.


The book is divided into three parts. In the first, “Foundations,” Dahlen and Tromp give an extensive introduction to continuum mechanics and discuss the representation of seismic sources and the free oscillations of a completely general Earth model. The resulting theory should provide the basis for future scientific discussions of the elastic-gravitational deformation of the Earth. The second part, “The Spherical Earth,” is devoted to the free oscillations of a spherically symmetric Earth. In the third part, “The Aspherical Earth,” the authors discuss methods of dealing with the Earth’s three-dimensional heterogeneity. The book is concerned primarily with the forward problem of global seismology — detailing how synthetic seismograms and spectra may be calculated and interpreted.


As a long-needed unification of theories in global seismology, the book will be important to graduate students and to professional seismologists, geodynamicists, and geomagnetists, as well as to astronomers who study the free oscillations of the Sun and other stars.

"[G]raduate students and their supervisors for years to come will turn with gratitude to Theoretical Global Seismology.... The theoretical seismology in this book is not merely an intellectual achievement of a very high order, it is driven by the need to understand our planet and will be the basis of applied seismology and other practical studies of wave generation and propagation for decades to come."—Paul G. Richards, Nature

"Tony Dahlen and Jeroen Tromp have written a treatise, Theoretical Global Seismology, that is authoritative and comprehensive.... Theoretical Global Seismology is a masterpiece and I strongly recommend it to every seismologist. Other geophysicists would do well to become acquainted with its contents, because its methodology extends far beyond seismology. After reviewing the book, I am pleased to report that dog-ears have appeared on my copy."—Freeman Gilbert, EOS

"...[T]his book is a remarkable achievement and, thanks to PUP, a great value. If you are a global seismologist, there is no excuse for not having this book on your bookshelf—and you should even read most of it! If you are a graduate student, this beast will take a little effort to absorb, but be assured—this really is the right way to think about global seismology."—Guy Masters, Seismological Research Letters