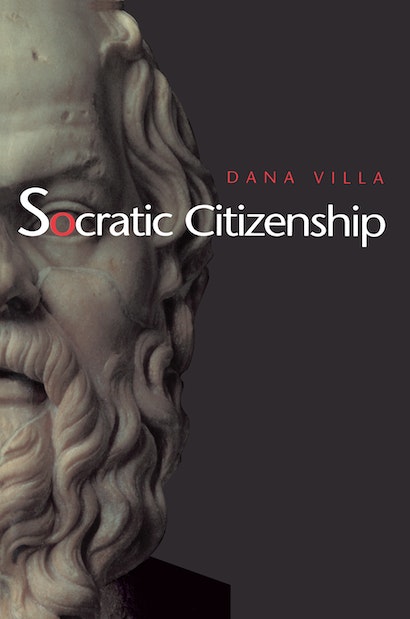 Many critics bemoan the lack of civic engagement in America. Tocqueville’s ”nation of joiners” seems to have become a nation of alienated individuals, disinclined to fulfill the obligations of citizenship or the responsibilities of self-government. In response, the critics urge community involvement and renewed education in the civic virtues. But what kind of civic engagement do we want, and what sort of citizenship should we encourage? In Socratic Citizenship, Dana Villa takes issue with those who would reduce citizenship to community involvement or to political participation for its own sake. He argues that we need to place more value on a form of conscientious, moderately alienated citizenship invented by Socrates, one that is critical in orientation and dissident in practice.


Taking Plato’s Apology of Socrates as his starting point, Villa argues that Socrates was the first to show, in his words and deeds, how moral and intellectual integrity can go hand in hand, and how they can constitute importantly civic — and not just philosophical or moral — virtues. More specifically, Socrates urged that good citizens should value this sort of integrity more highly than such apparent virtues as patriotism, political participation, piety, and unwavering obedience to the law. Yet Socrates’ radical redefinition of citizenship has had relatively little influence on Western political thought. Villa considers how the Socratic idea of the thinking citizen is treated by five of the most influential political thinkers of the past two centuries — John Stuart Mill, Friedrich Nietzsche, Max Weber, Hannah Arendt, and Leo Strauss. In doing so, he not only deepens our understanding of these thinkers’ work and of modern ideas of citizenship, he also shows how the fragile Socratic idea of citizenship has been lost through a persistent devaluation of independent thought and action in public life.


Engaging current debates among political and social theorists, this insightful book shows how we must reconceive the idea of good citizenship if we are to begin to address the shaky fundamentals of civic culture in America today.

Dana Villa is Associate Professor of Political Theory at the University of California, Santa Barbara. He is the author of Politics, Philosophy, Terror: Essays on the Thought of Hannah Arendt and Arendt and Heidegger: The Fate of the Political (both Princeton) and is the editor of The Cambridge Companion to Hannah Arendt.

"An exceptional book, well written and instructive at every point."—Choice

"This book deserves a wide, appreciative readership, both for the importance of the argument and for the depth and breadth of the interpretations that support it."—Gerald Mara, American Political Science Review

"Villa has put his finger on the tension to which liberals and deliberative democrats will have to devote ever more attention, and he has written an informative and stimulating book."—Cillian McBride, Philosophy in Review

"In this extraordinary work Dana Villa gives us a deep, detailed, and provocative account of what five very difficult thinkers made of the prospects for Socratic integrity in the context of modern citizenship. His pursuit of the thematic concerns is masterly."—Jeremy Waldron, Columbia University

"Socratic Citizenship is elegantly written, and its lucidity, thoughtfulness, generosity, and unhurried pace invite readers to think with it. Villa's command of the texts is effortless and the scholarship is unpretentious."—J. Peter Euben, University of California, Santa Cruz