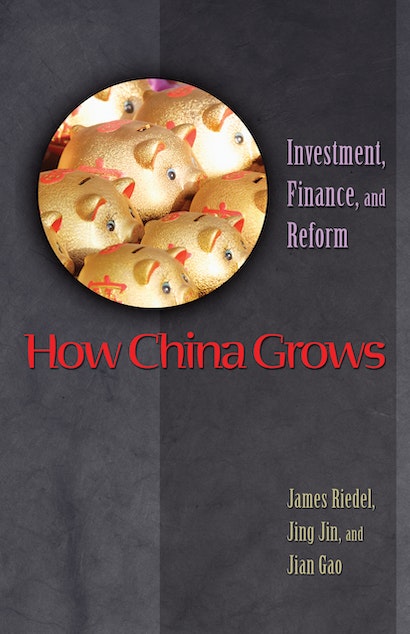 Although China’s economy has grown spectacularly over the last twenty-five years, economists disagree about how the Chinese economy is likely to fare in the short- and long-term future. Is China’s growth sustainable, or has China relied too much on investment, which is subject to diminishing returns, and not enough on technological change? The first book on the relation between investment, finance, and growth in China, How China Grows dismisses this concern. James Riedel, Jing Jin, and Jian Gao argue that investment has not only been the engine of growth, but also the main source of technological progress and structural change in China.


What threatens future growth instead, the authors argue, are the weaknesses of China’s financial system that undermine efficiency in investment allocation. Financial-sector reform and development are necessary, not only for sustaining long-term growth, but also for maintaining macroeconomic stability.


Although it includes some technical economic analysis, How China Grows is accessible to noneconomists and will benefit anyone who is interested in development finance in general and in China’s economic growth in particular — whether economists, political scientists, bankers, or business people.

James Riedel is Professor of International Economics at Johns Hopkins University's School of Advanced International Studies. Jing Jin is Director of China Strategy for UBS AG Hong Kong, and a professor at Beijing's Central University of Finance and Economics. Jian Gao is Vice-Governor of the China Development Bank in Beijing.

"Using rich and much updated graphs and tables, the authors convincingly argue that China's spectacular growth has been driven mainly by its ability to channel domestic and foreign savings into restructuring its economy since the late 1970s."—G.J. Wen, Choice

"Some parts of this work, especially the equation-heavy chapter on savings processes and investment rates, are best appreciated by those with solid economics backgrounds, but even non-experts interested in China's growth will appreciate the arguments made here."—Marc Lanteigne, International Affairs

"Overall, this is a very valuable book which systematically examines and analyzes the relationship between investment and growth in China over the past three decades. Using rich and up-to-date data and materials, it argues convincingly that China's spectacular growth has been driven mainly by its ability to channel domestic and foreign savings into restructuring its economy since 1978. . . . This book not only contributes to the existing academic literature in development finance but also provides valuable policy suggestions on China's financial sector reform and liberalization. Although it includes some technical economic analysis, it is written in a way that is easy to read and to understand. It is accessible to a broad range of readers, including academics, policy-makers, business people, students and non-economists. The book will benefit anyone who is interested in development finance in general and in China's economic growth and financial market development in particular."—Chunlai Chen, The China Journal

"The book is accessible and informative to a broad readership: from a lay reader to those who work in the field of finance and development, China specialists and policy makers."—Yu Chen, Progress in Development Studies

"The book does not break new ground, but its conceptual approach, its empirical analysis and its detailed up-to-date account of the ongoing reform programs and their policy background in China make it highly recommended for those working on or studying the Chinese economy. The book is especially useful for those interested in financial sector reform in China. As claimed by the authors, policy-makers in China will also find this book useful."—Ligang Song, Economic Record

"It is an excellent overview of the development of the financial system to date. . . . What is new and surprising is how succinctly and effectively the authors have brought together the technical literature with laymen's language to make this argument. It is one of the best treatises I have seen on financial reform."—Doug Guthrie, China Quarterly

"This book will be well received by researchers and policy makers. The focus of the book—how the Chinese economy has grown so far, and whether or not this growth will be sustainable—is an attractive topic given the great importance of the Chinese economy in the world, but also because the authors of the book provide an unconventional method of analysis."—Asian Affairs

"Although it includes some technical economic analysis, How China Grows is accessible to noneconomists and will benefit anyone who is interested in development finance in general and in China's economic growth in particular whether economists, political scientists, bankers, or business people."—World Book Industry

"How China Grows is a concise and systematic evaluation of the role of investment in China's economic growth since 1978. The authors argue that investment has been the main driver of China's growth but that future growth will require a more effective financial, particularly banking, system. This is the first book to systematically examine the investment—growth nexus in China, and those interested in understanding the dynamics of China's growth over the past three decades will certainly want to read it."—Nicholas R. Lardy, Institute for International Economics