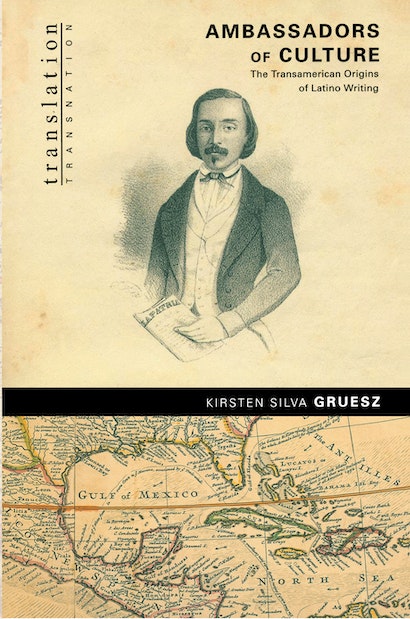 This polished literary history argues forcefully that Latinos are not newcomers in the United States by documenting a vast network of Spanish-language cultural activity in the nineteenth century. Juxtaposing poems and essays by both powerful and peripheral writers, Kirsten Silva Gruesz proposes a major revision of the nineteenth-century U.S. canon and its historical contexts.


Drawing on previously unpublished archival materials and building on an innovative interpretation of poetry’s cultural role, Ambassadors of Culture brings together scattered writings from the borderlands of California and the Southwest as well as the cosmopolitan exile centers of New York, New Orleans, and San Francisco. It reads these productions in light of broader patterns of relations between the U.S. and Latin America, moving from the fraternal rhetoric of the Monroe Doctrine through the expansionist crisis of 1848 to the proto-imperialist 1880s. It shows how ”ambassadors of culture” such as Whitman, Longfellow, and Bryant propagated ideas about Latin America and Latinos through their translations, travel writings, and poems. In addition to these well-known figures and their counterparts in the work of nation-building in Cuba, Mexico, and Central and South America, this book also introduces unremembered women writers and local poets writing in both Spanish and English.


In telling the almost forgotten early history of travels and translations between U.S. and Latin American writers, Gruesz shows that Anglo and Latino traditions in the New World were, from the beginning, deeply intertwined and mutually necessary.

Kirsten Silva Gruesz is Associate Professor of Literature at the University of California, Santa Cruz.

"Gruesz's [provides] lucid justification for directing students of nineteenth-century U.S. literature to ponder the efforts that certain North American writers made, in the 1820s and 30s, to foster a hemispheric consciousness and then, in the face of expansionist militarism during and after the 1840s, to mark out oppositional stances based on claims of distinctiveness concerning such things as religion, trade practices and philosophies of life. . . . [A] rich and suggestive undertaking."—Barbara Ryan, H-Amstdy

"Gruesz's interesting study of 19th century Spanish language print culture in the US recognizes the contributions made by Latino poets and journalists to both US literary history and the construction of a Latino identity."—Choice

"Ambassadors had me revising my American Literature syllabus before I had finished reading the Introduction."—Barbara Ryan, H-Net Reviews

"This book is the best study of transamerican literary contact I have seen in a decade. It is the work of a consummate comparative Americanist who is conversant, often in breathtaking detail, with the literatures and cultures of a number of American geographies, both north and south. Gruesz has produced a comparative study par excellence, one that balances close readings with a rigorously historicist approach. Ambassadors of Culture is impressive on all counts and is a tremendous contribution."—Vera M. Kutzinski, Yale University

"This is a splendid and gracefully written book—one of the most significant books in the field of American studies. Throughout Gruesz writes with clarity, directness, and elegance. She is without question one of the best inter-American literary historians today and ranks with the top comparative theorists generally."—José David Saldívar, University of California, Berkeley