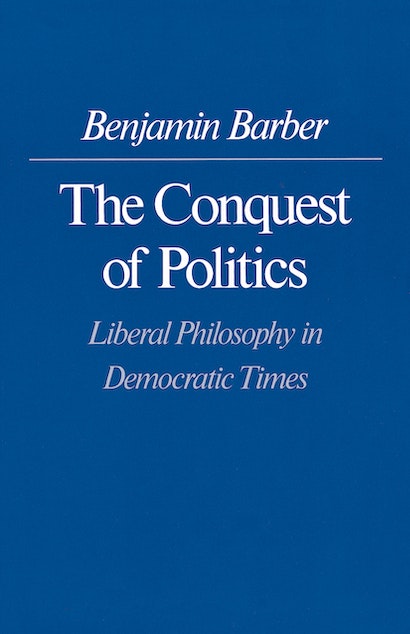 The description for this book, The Conquest of Politics: Liberal Philosophy in Democratic Times, will be forthcoming.

"[His commitment to democratic radicalism] has made Barber one of the leading—he is also one of the most intelligent—representatives of contemporary republican political theory. He is . . . a passionate advocate of participation, citizenship, and civic virtue."—Michael Walzer, New York Review of Books

"Addressing the thought of six major twentieth-century philosophers—Bertrand Russell, John Rawls, Robert Nozick, Bruce Ackerman, Michael Oakeshott, and Alasdair MacIntyre—Benjamin Barber maintains that each of them has aided in the 'conquest of politics' by abstract and speculative philosophy. In this lively and accessible book Barber proposes a way of doing political philosophy that does take practical politics into account. The Conquest of Politics is replete with . . . droll and nimble wit. . . . While deflating the sometimes arcane and pretentious prose of philosophers, Mr. Barber's own style succeeds admirably in approximating the riposte of good political conversation."—Francis Kane, New York Times Book Review