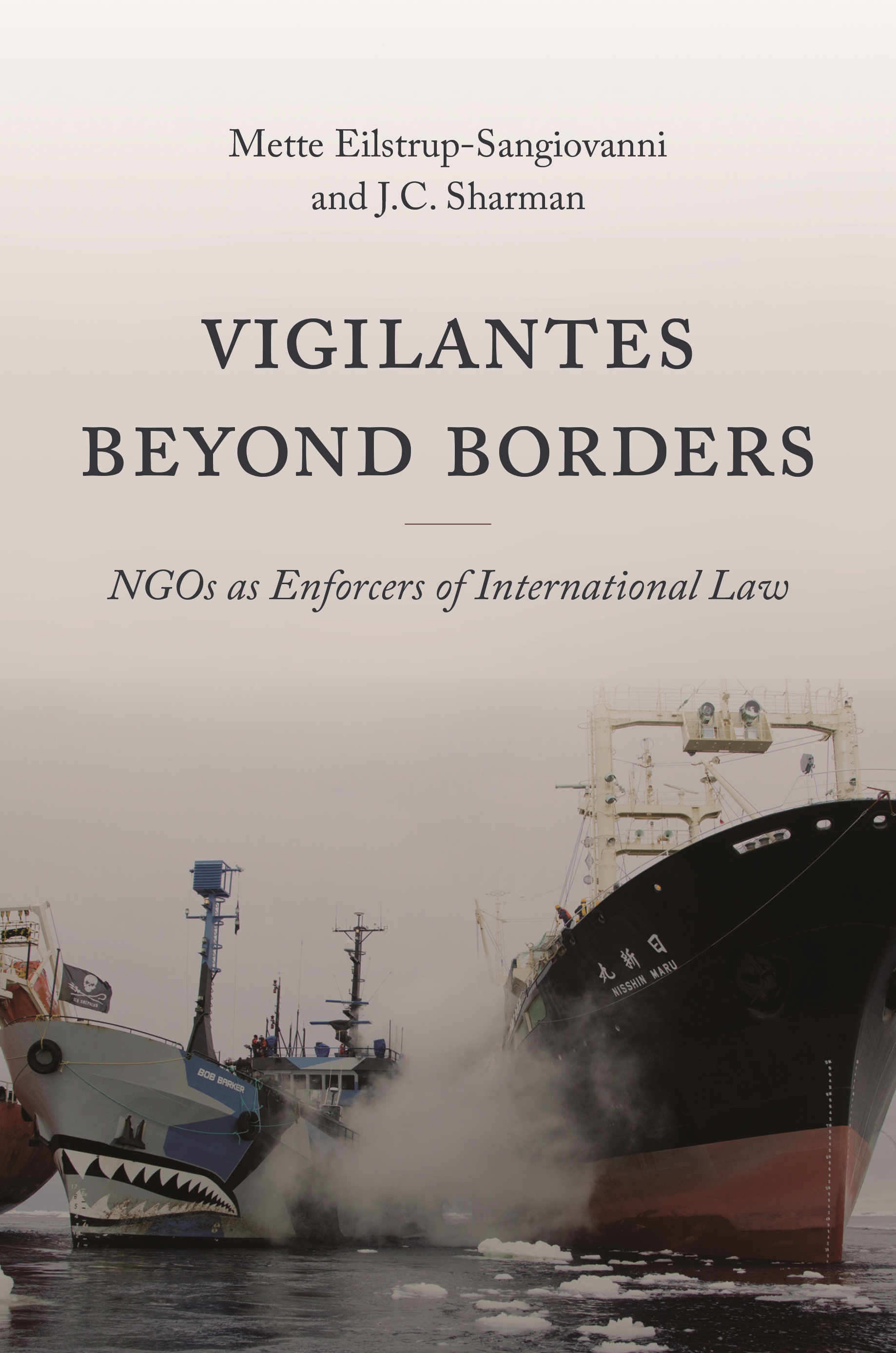 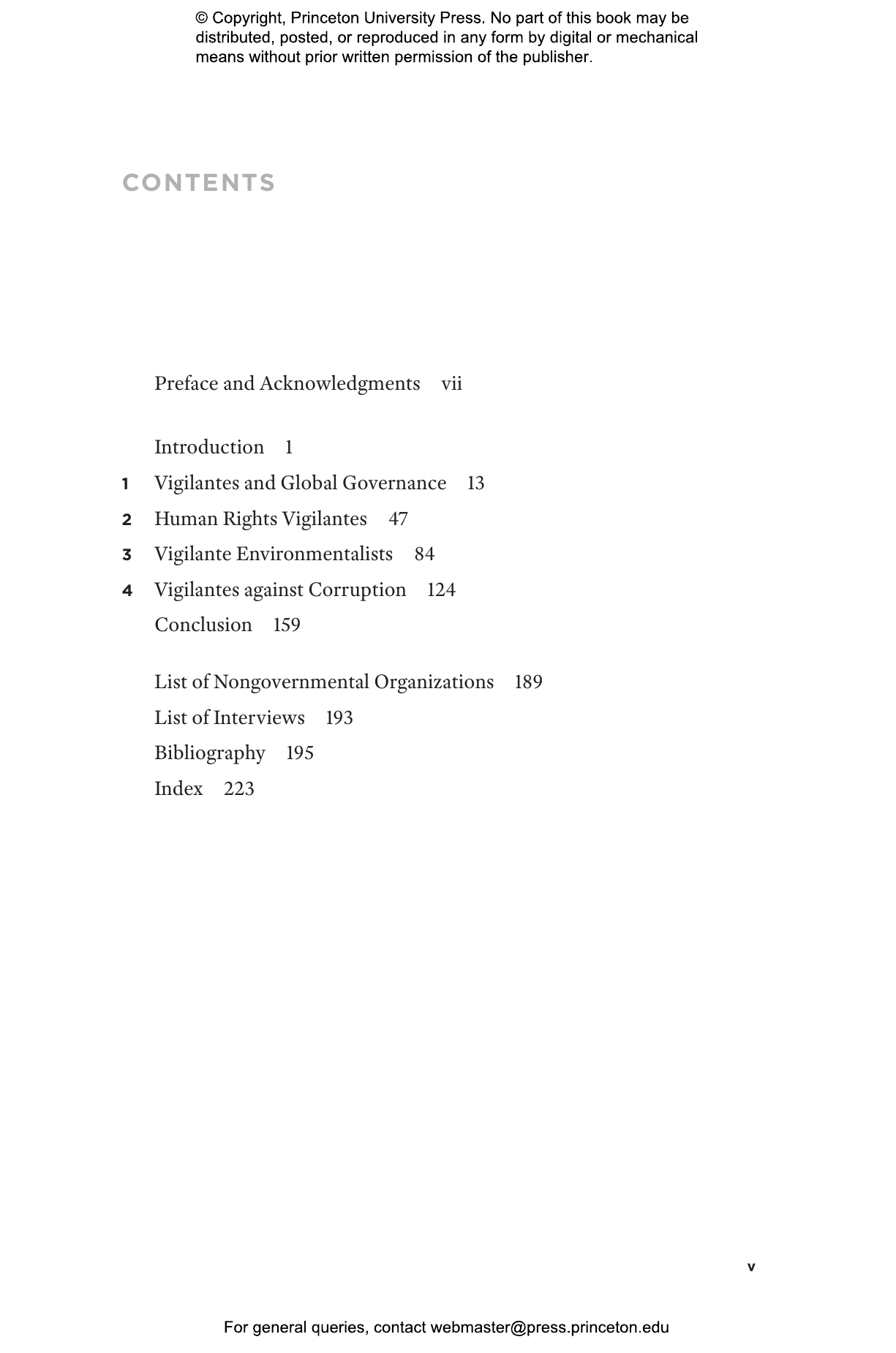 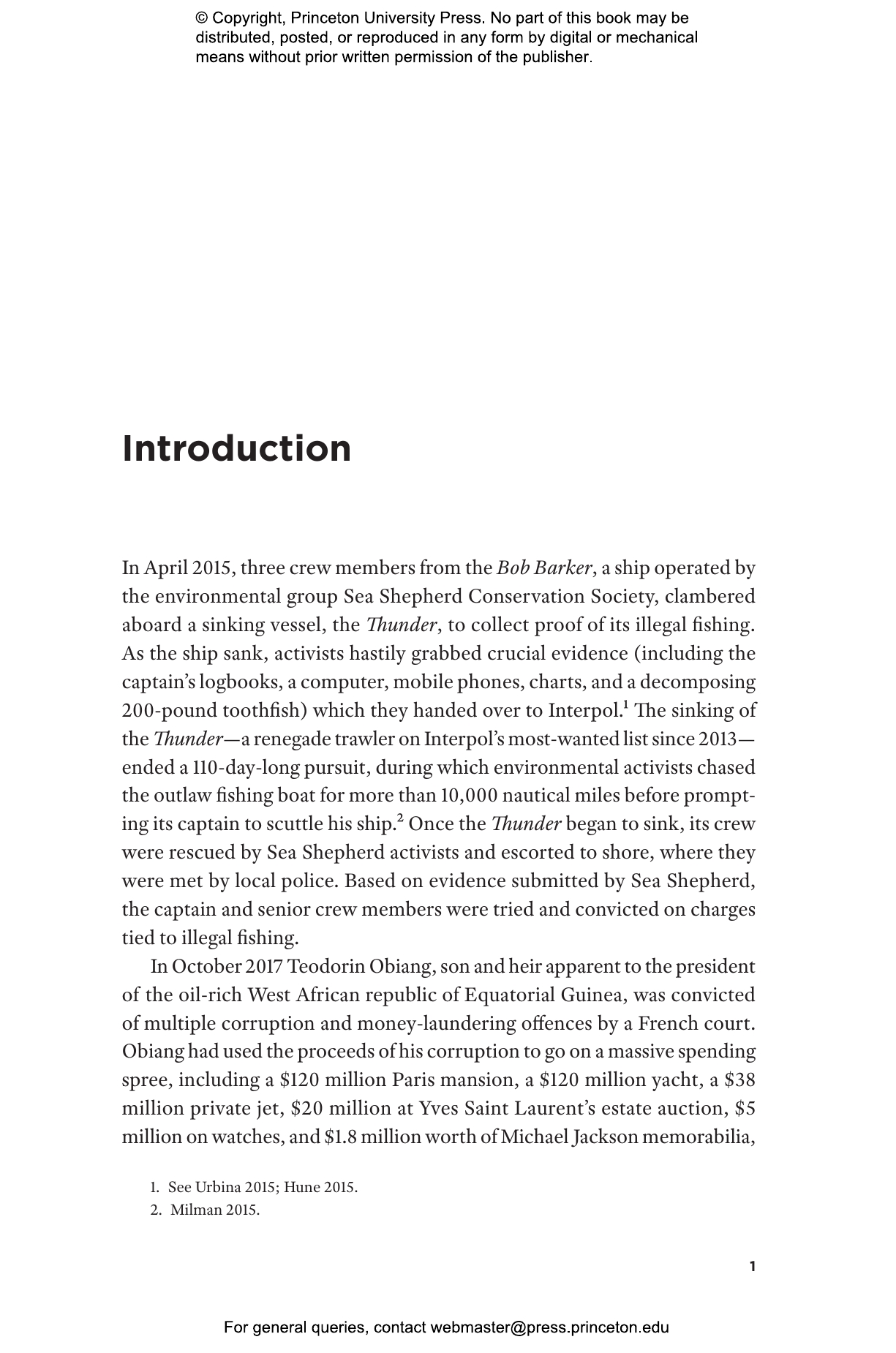 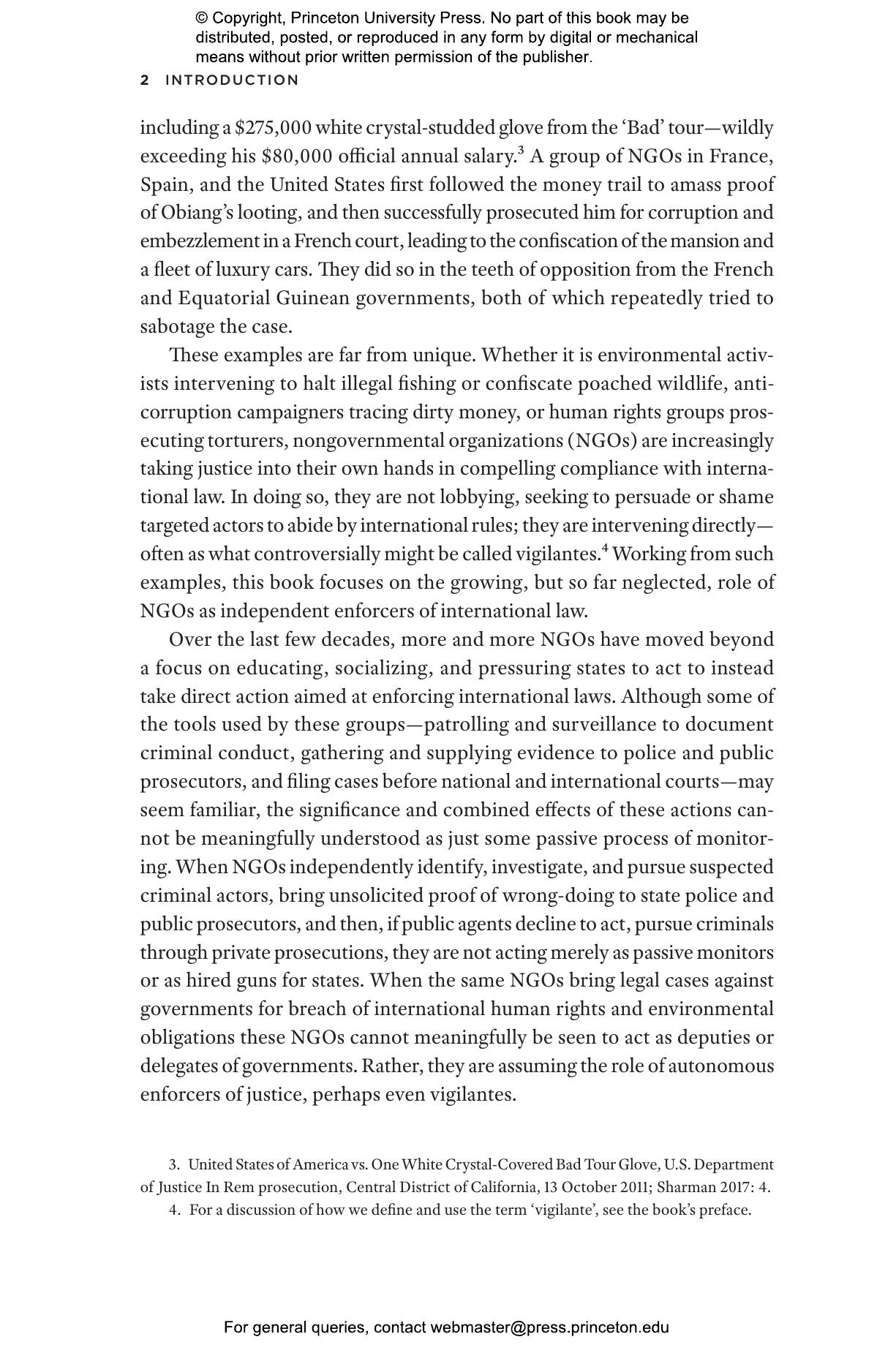 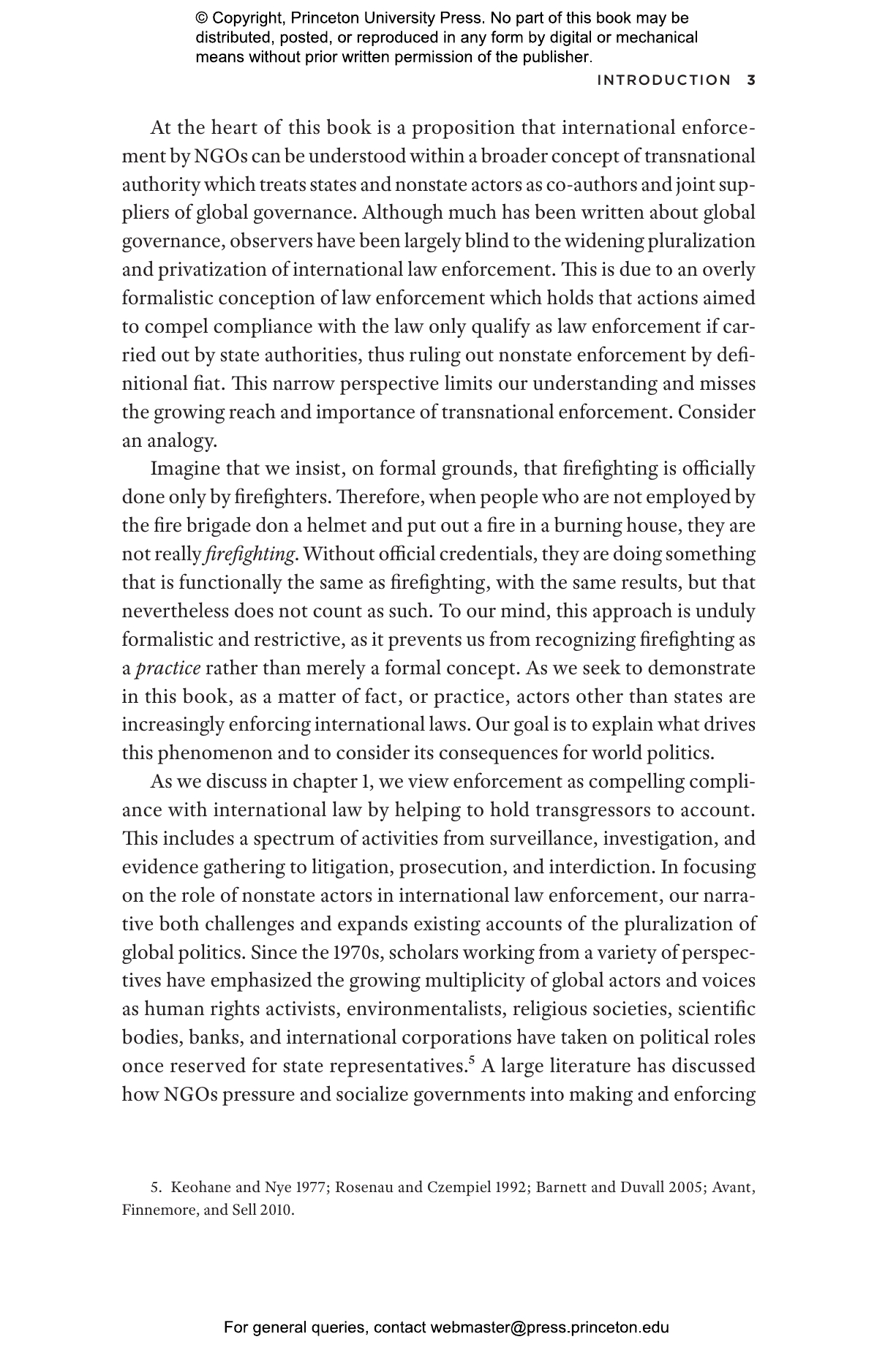 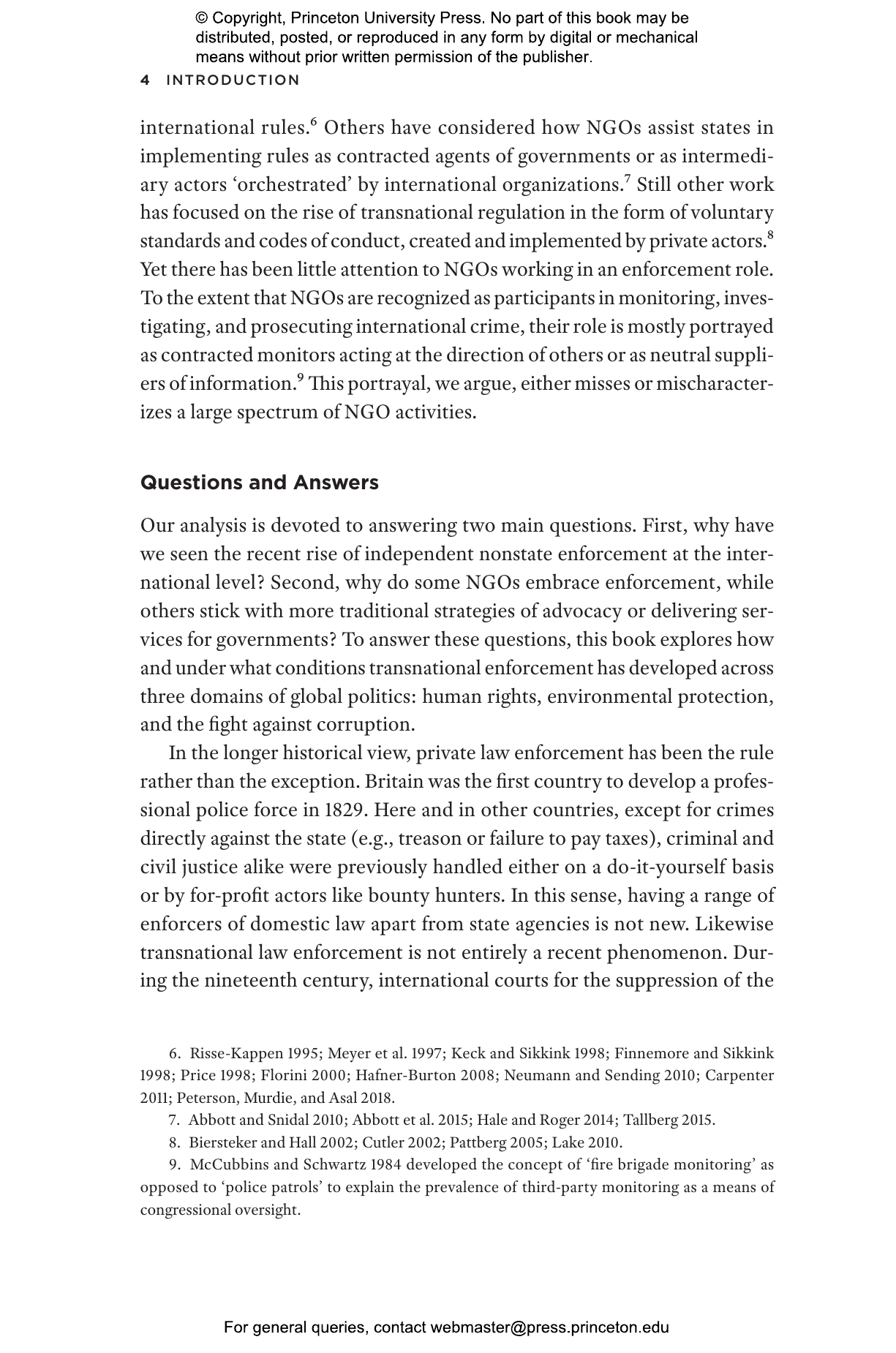 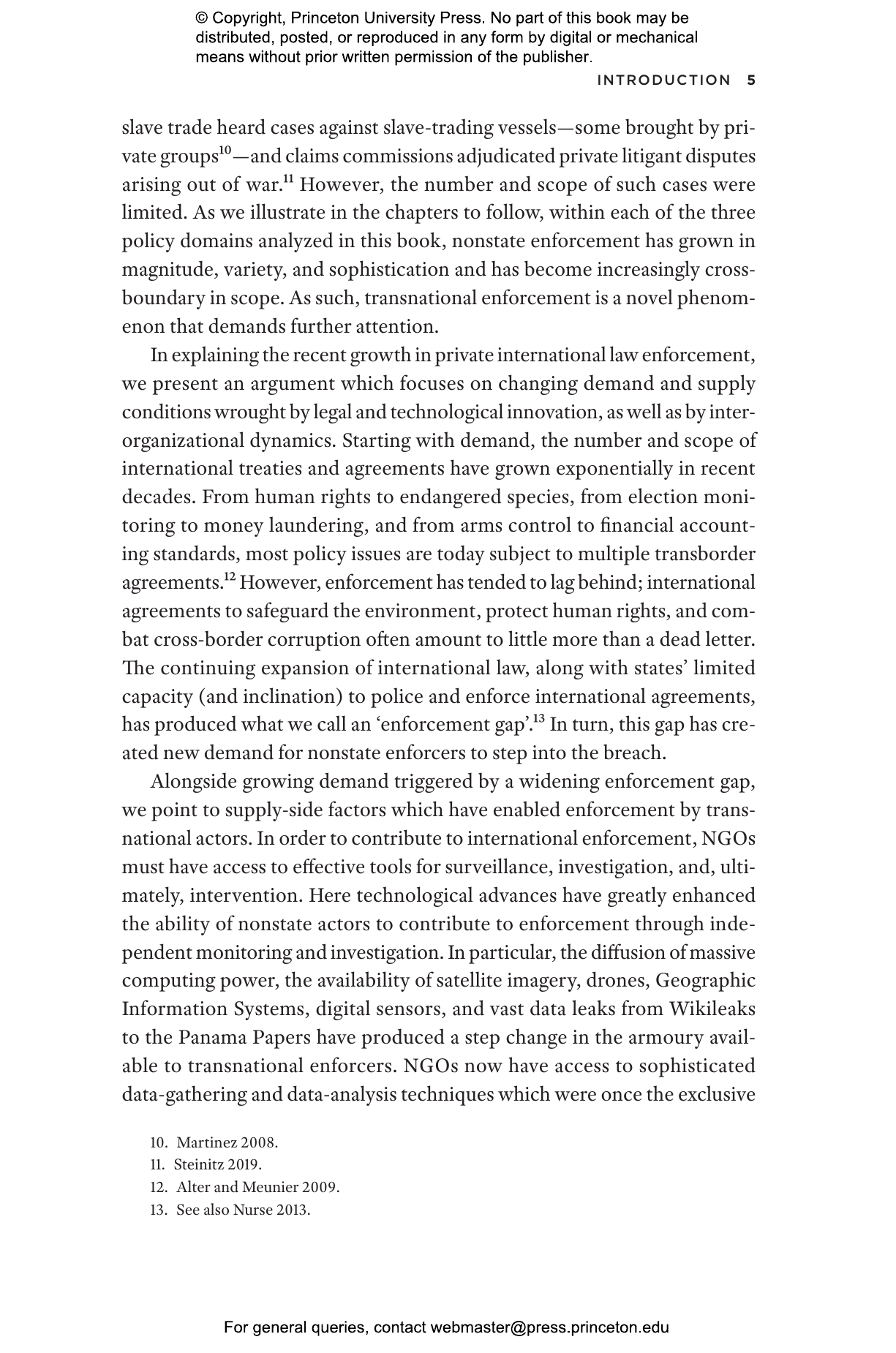 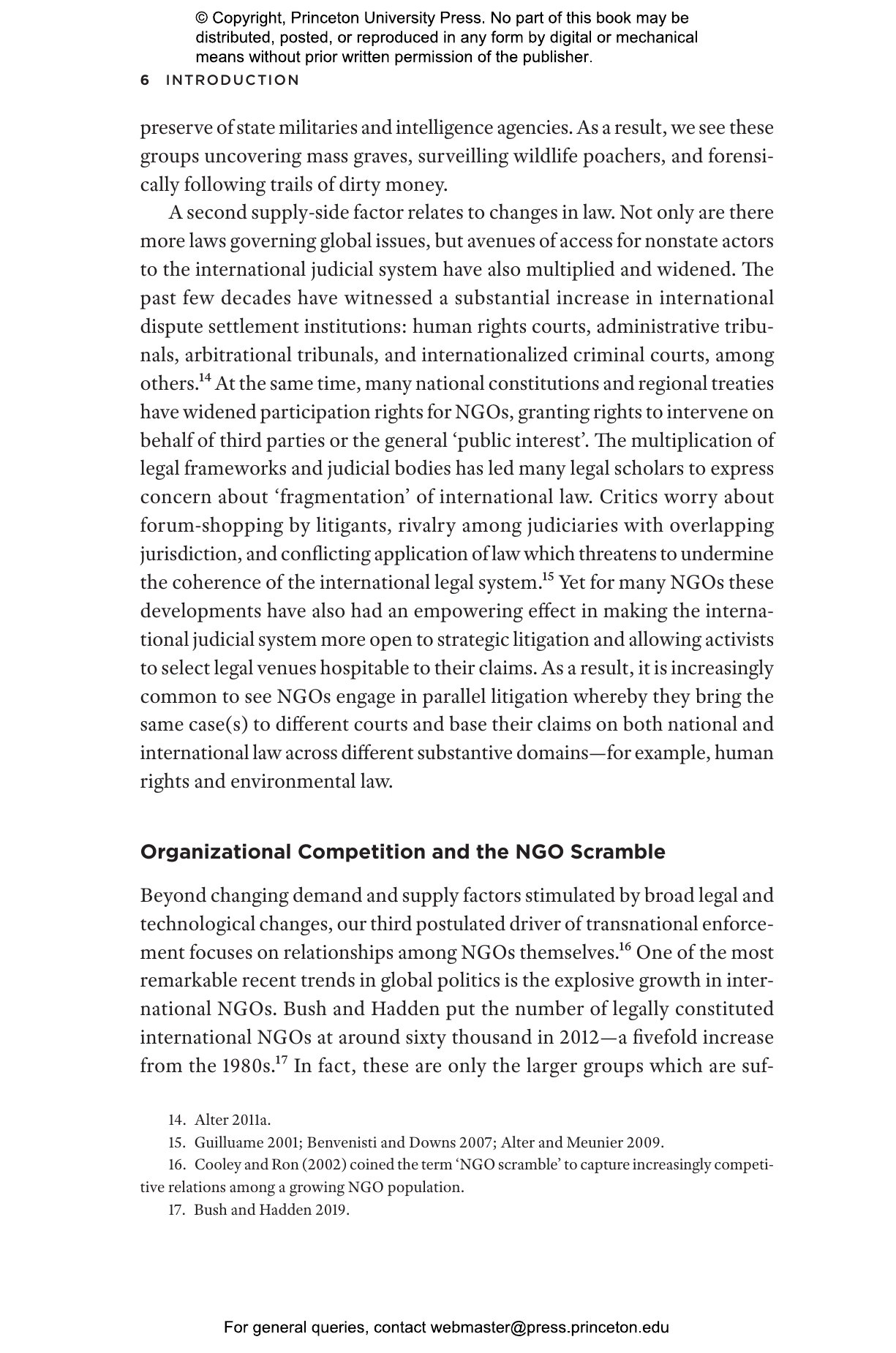 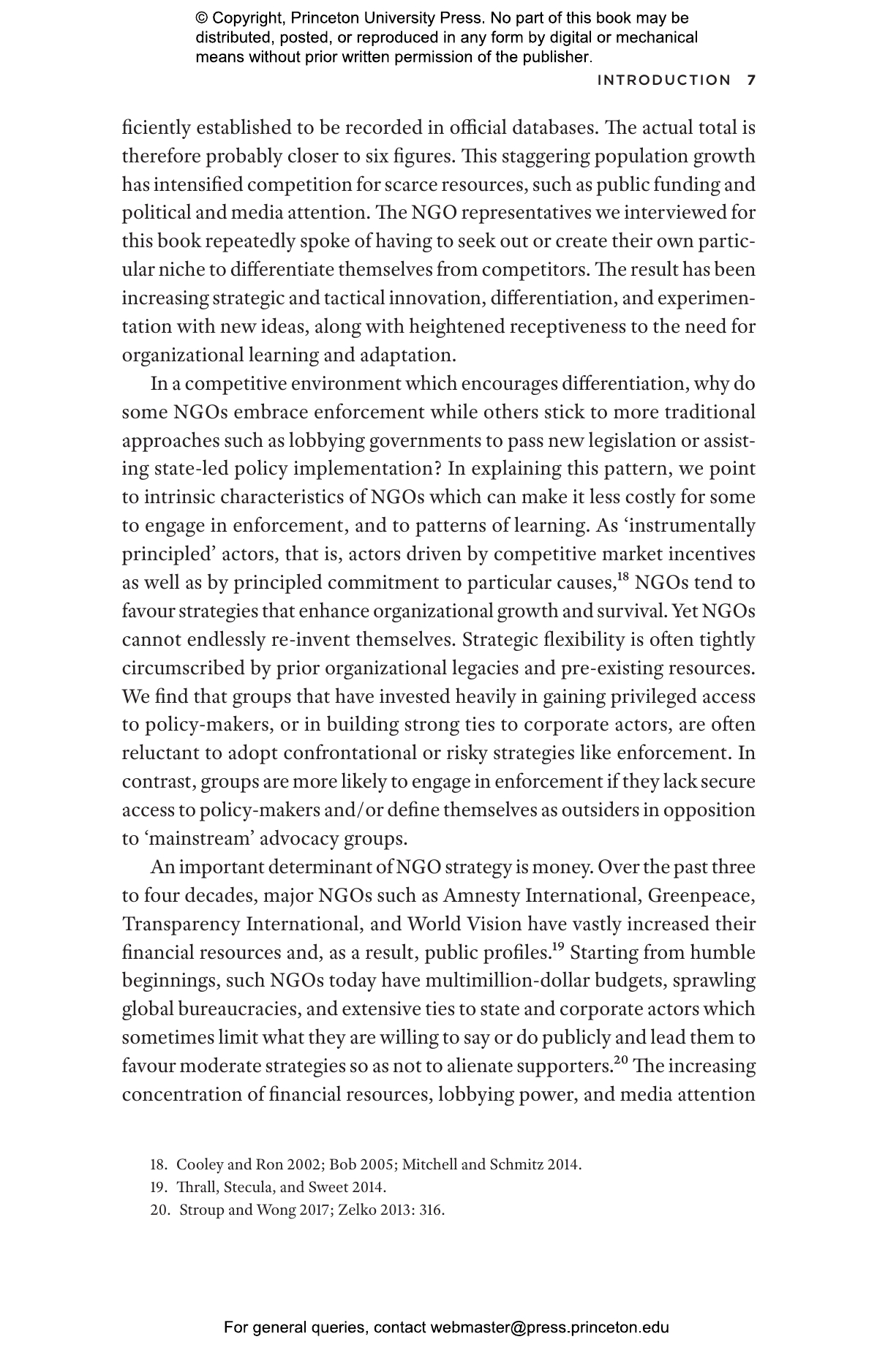 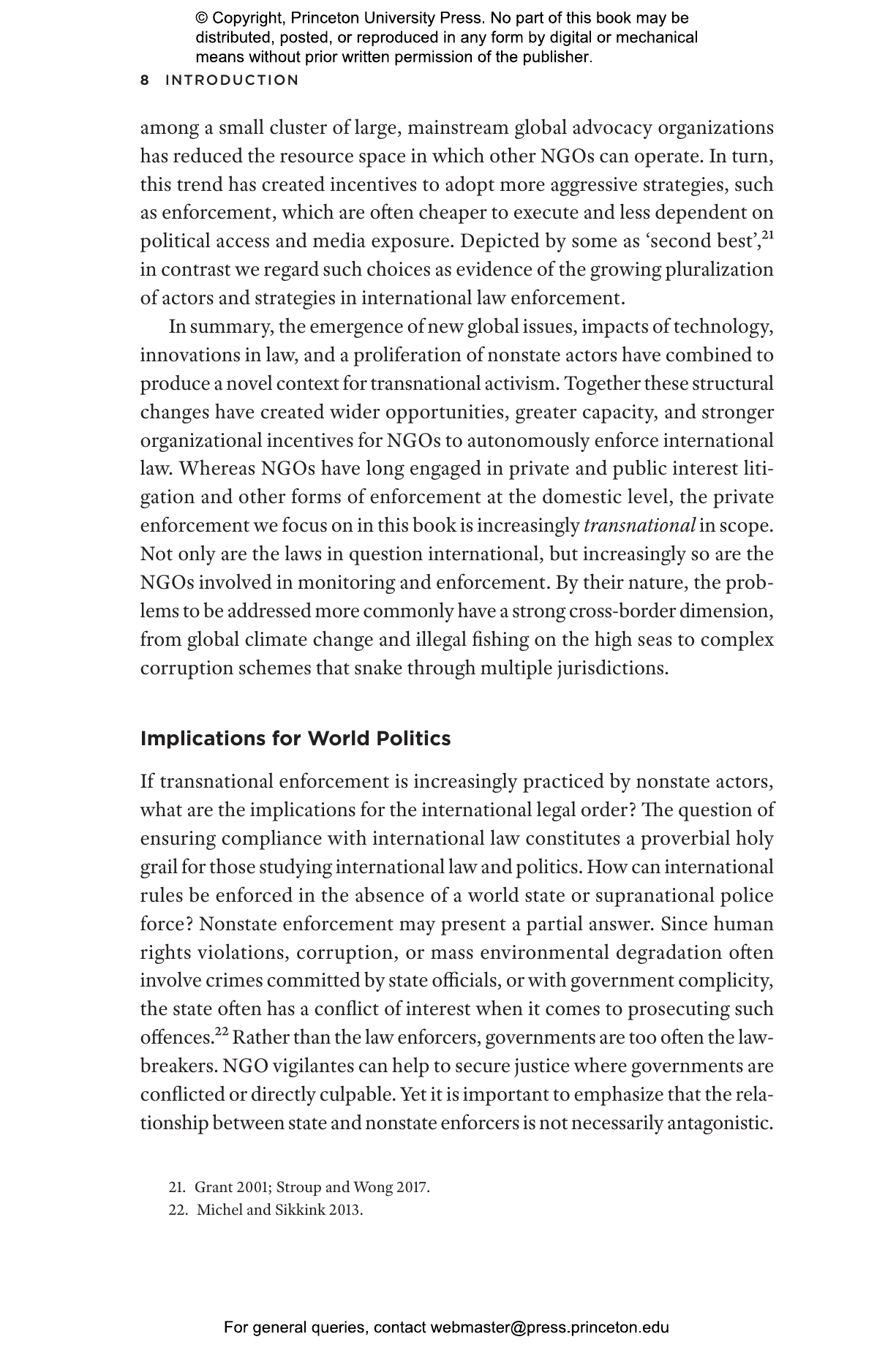 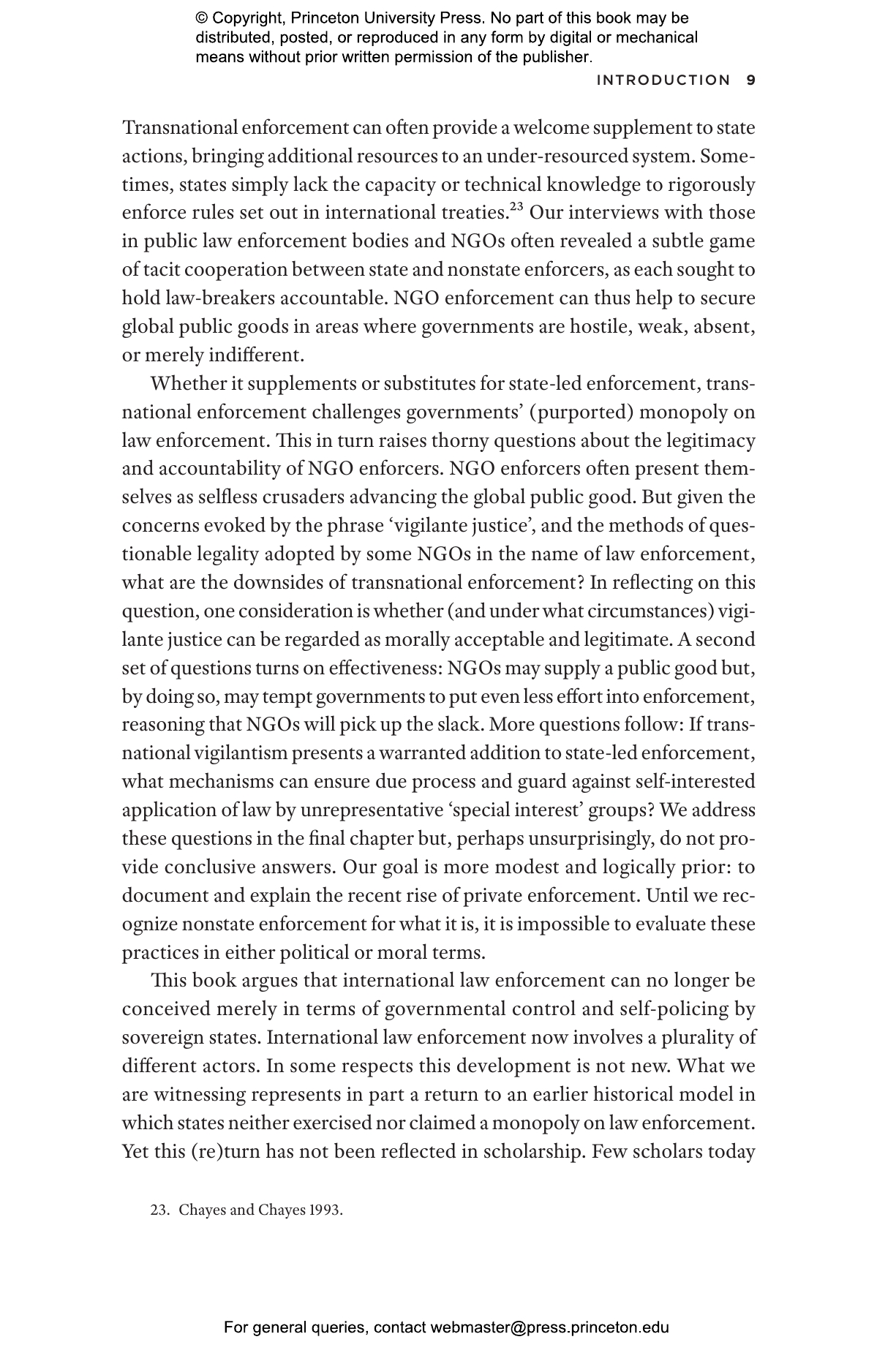 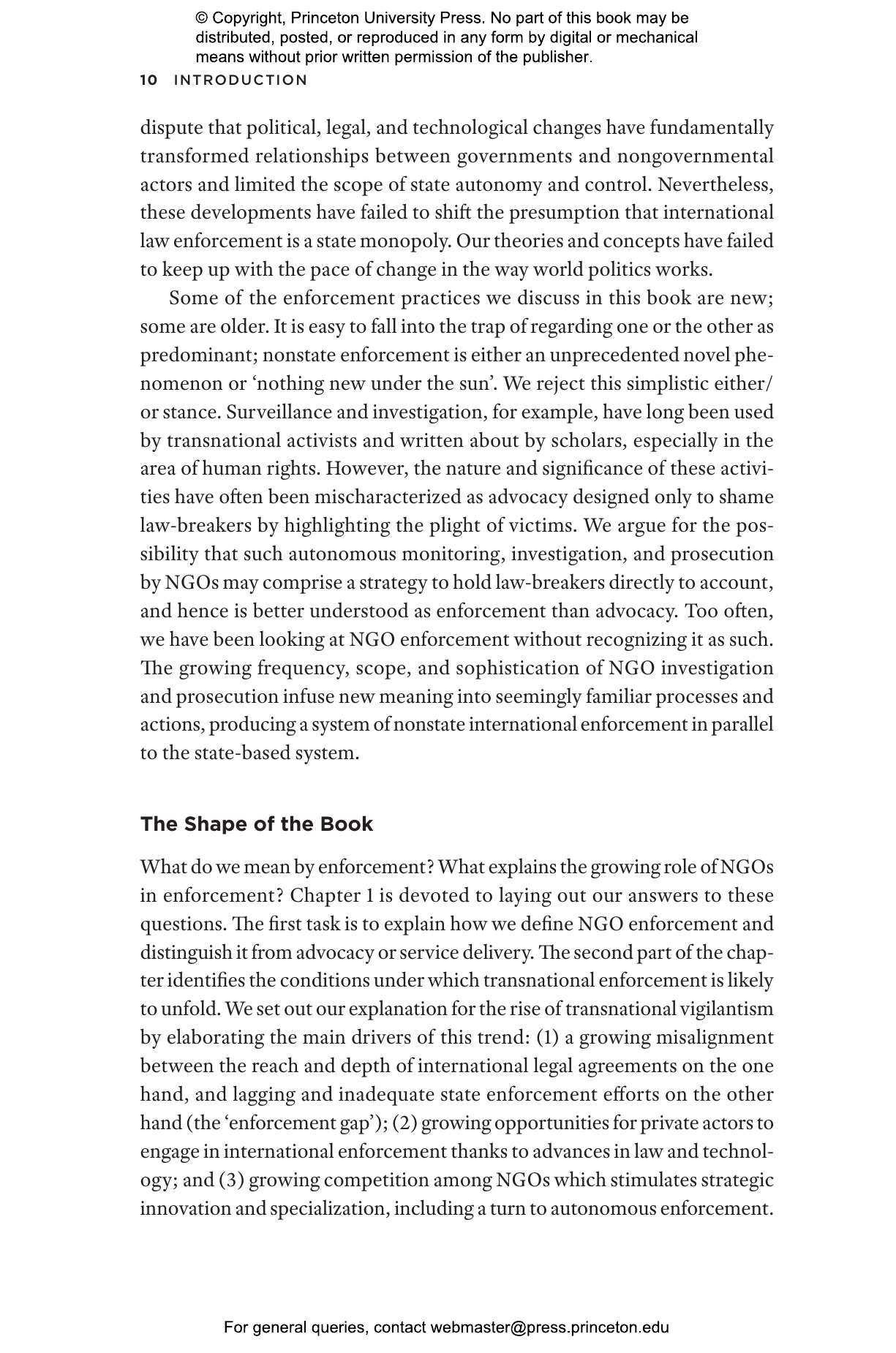 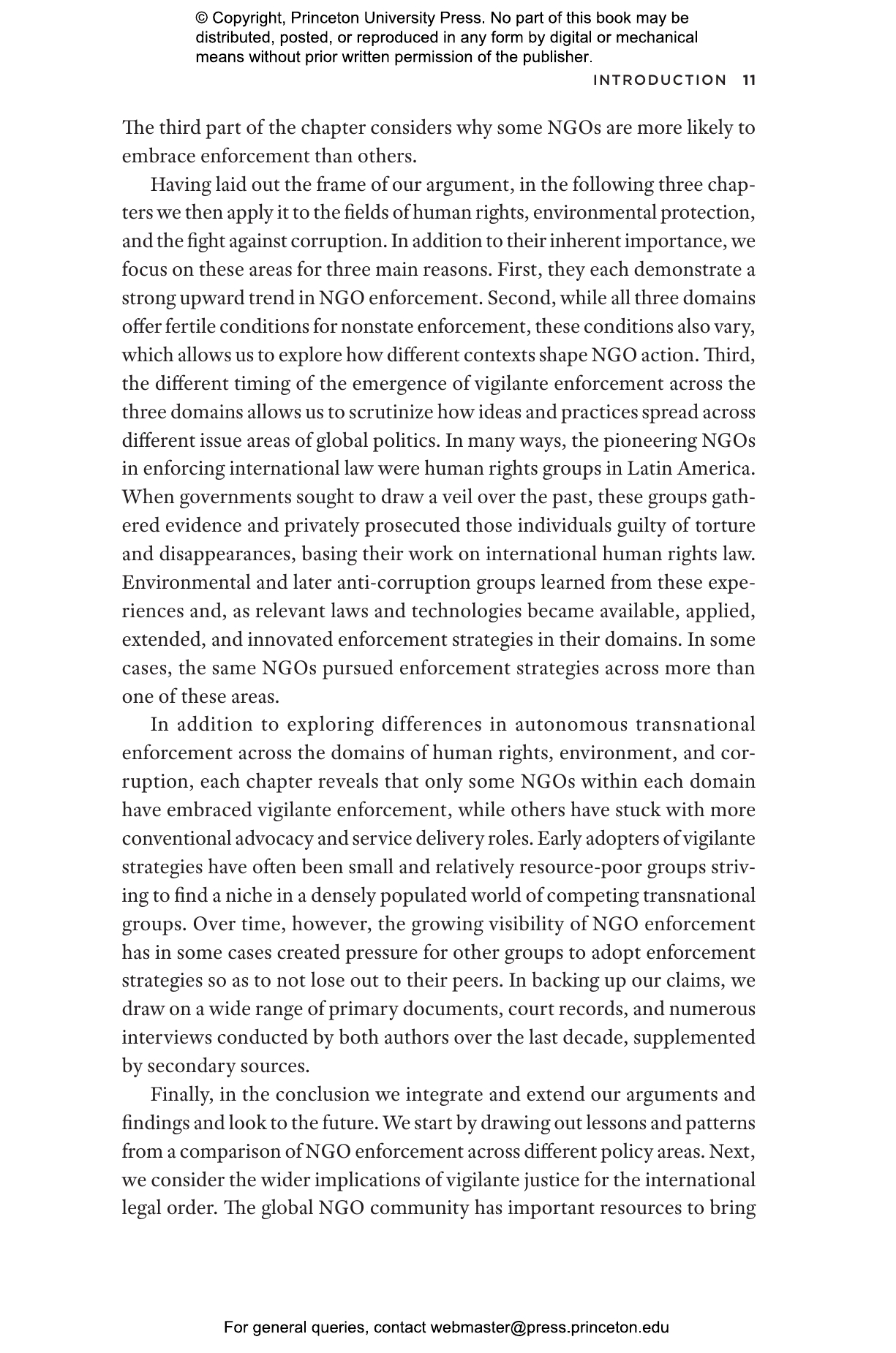 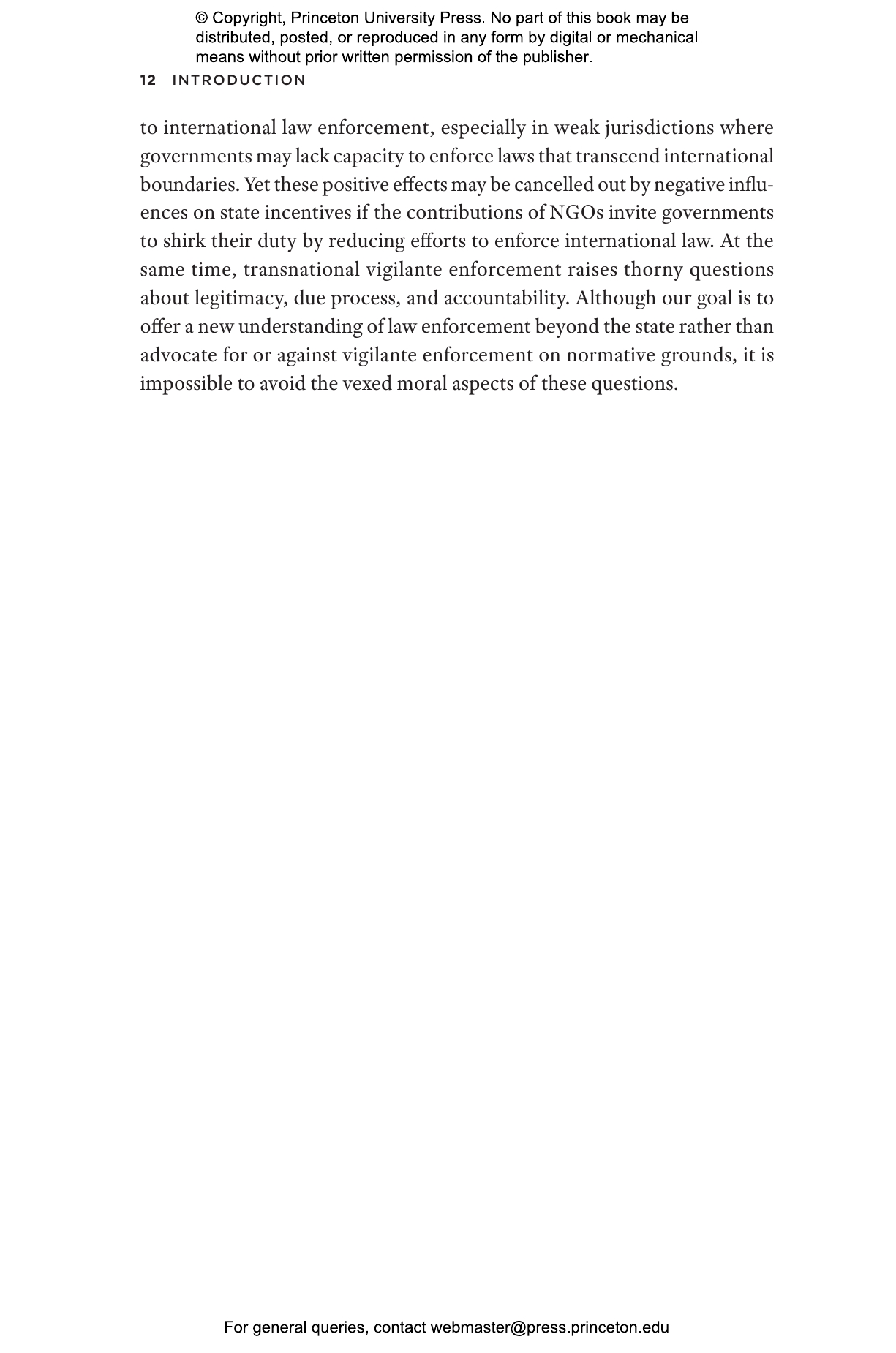 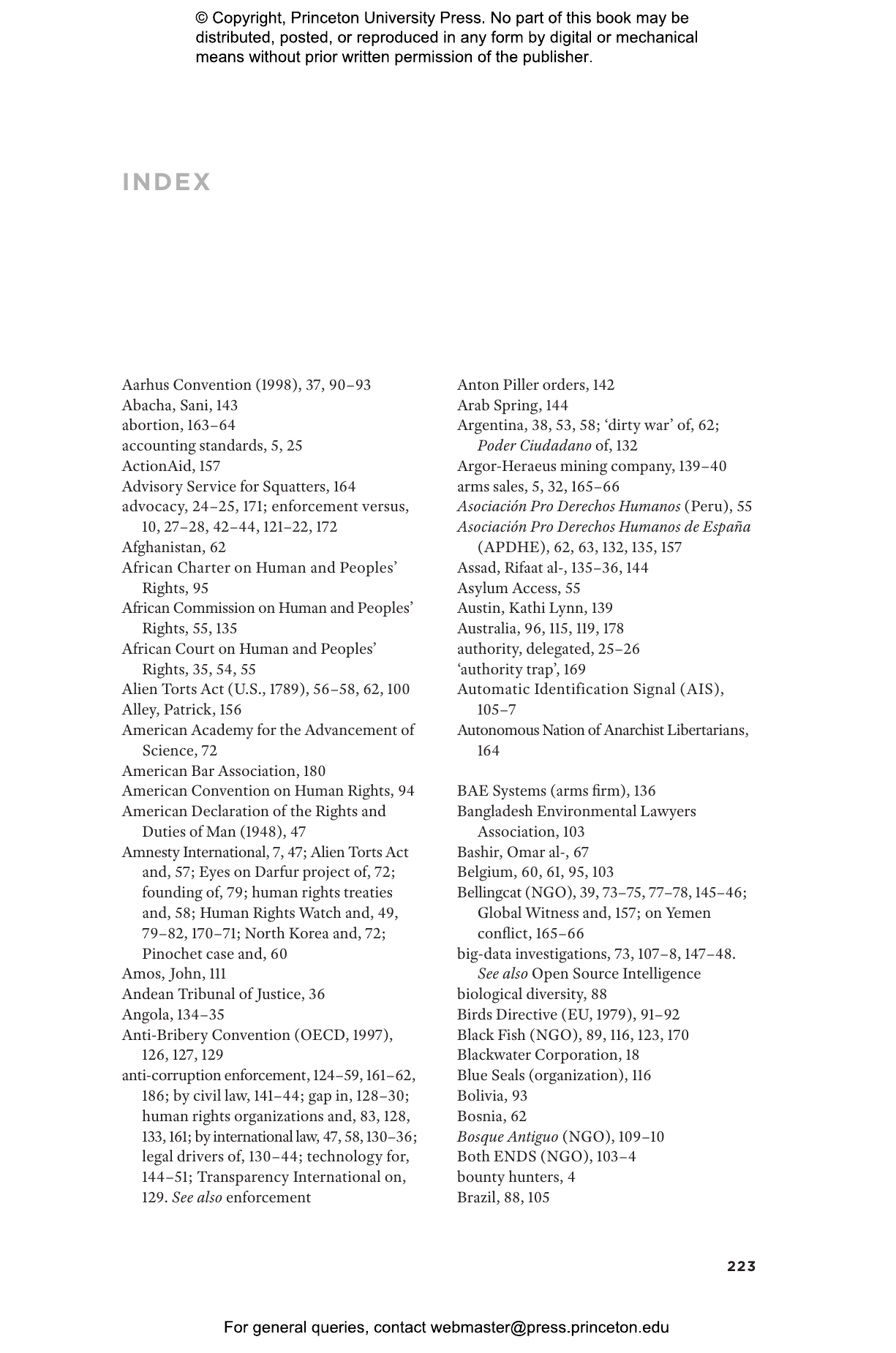 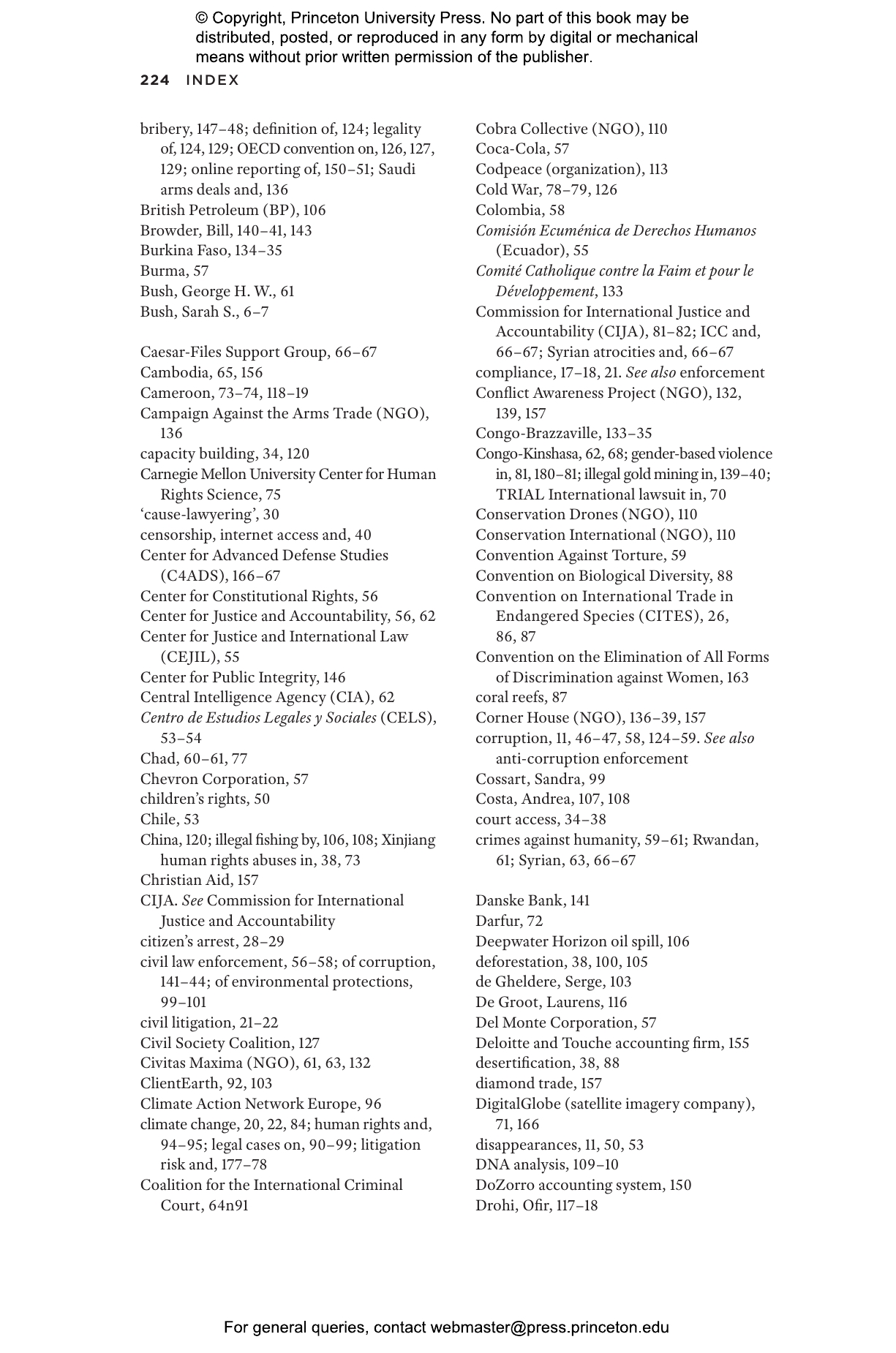 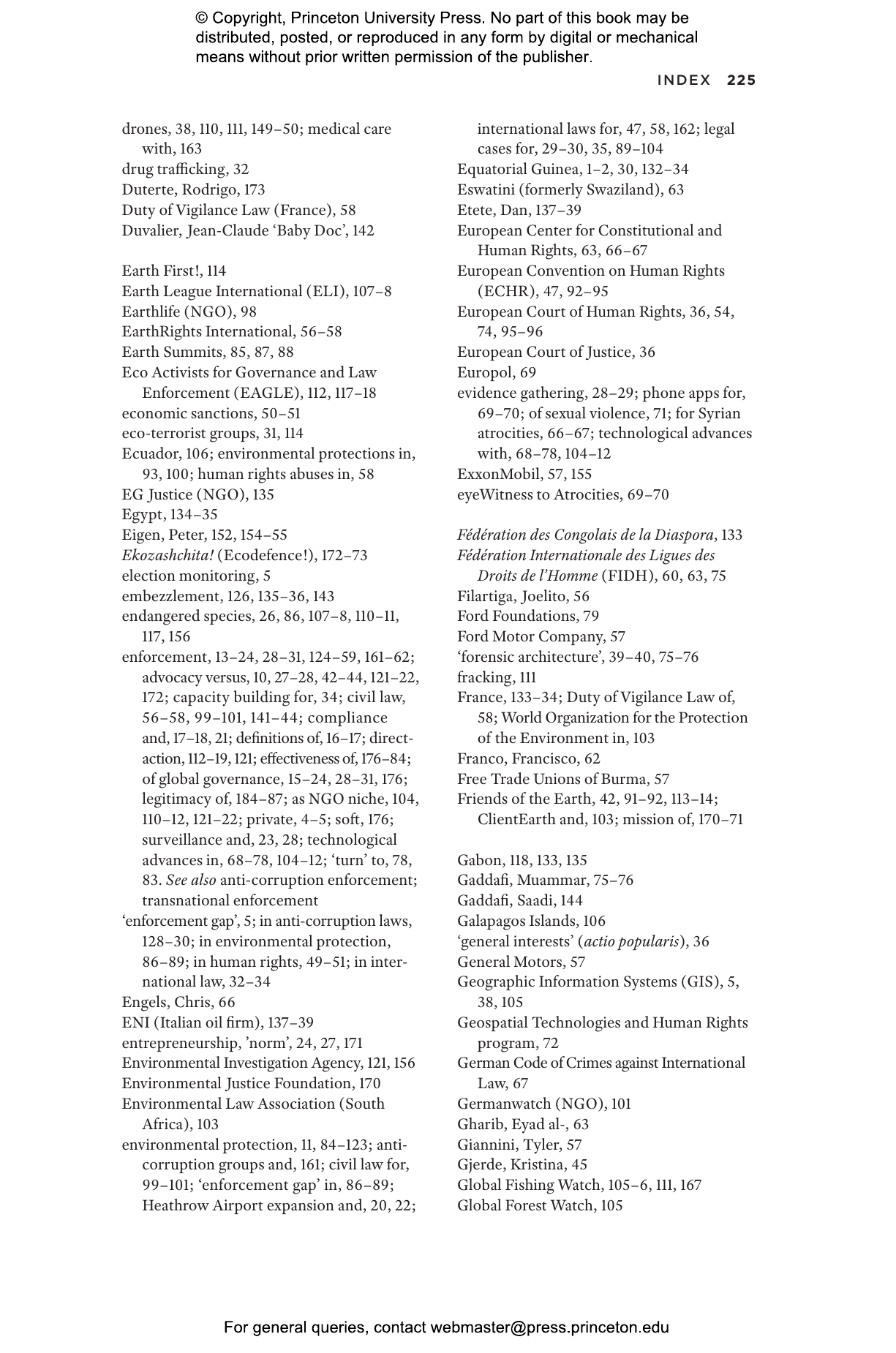 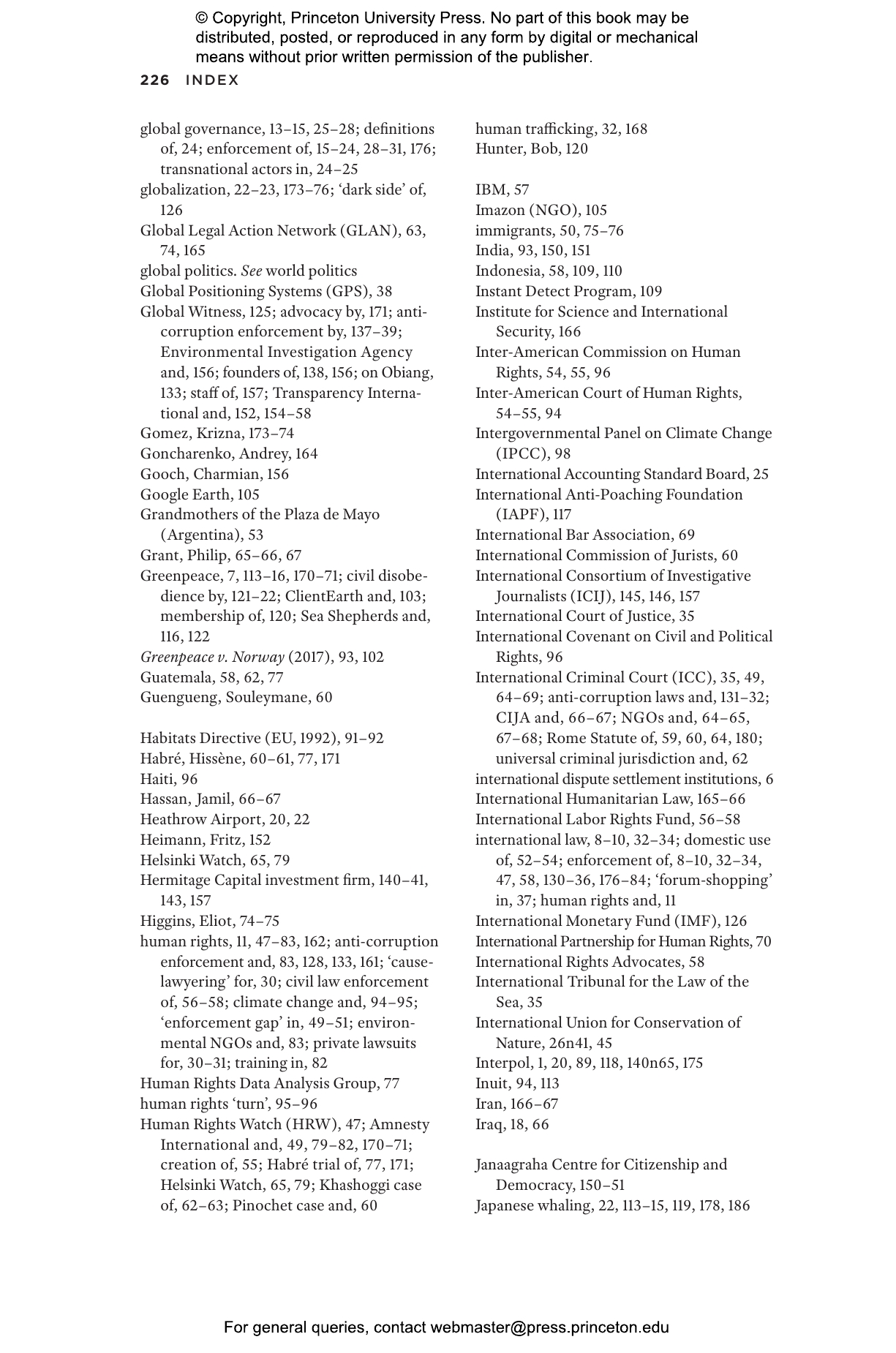 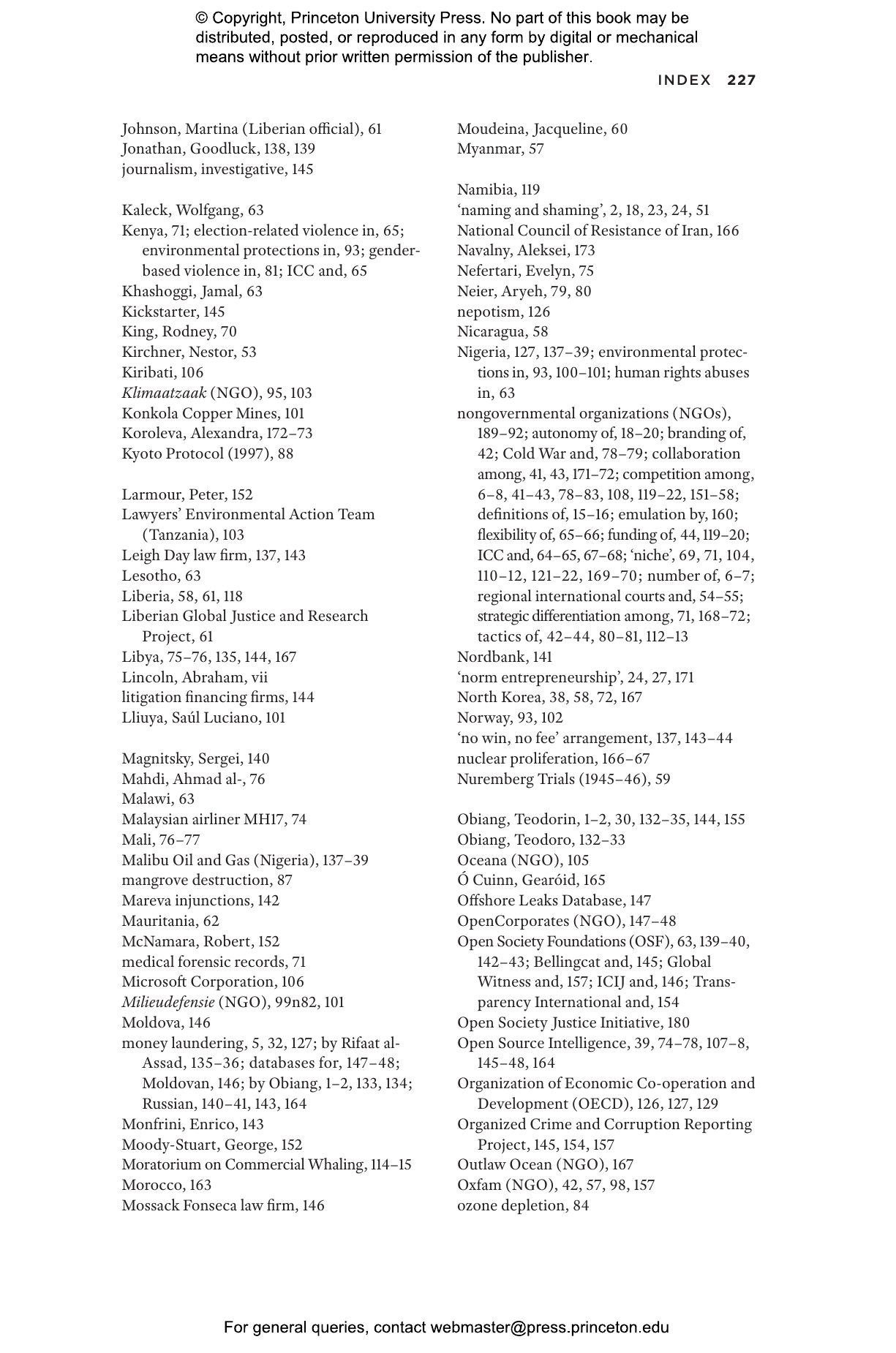 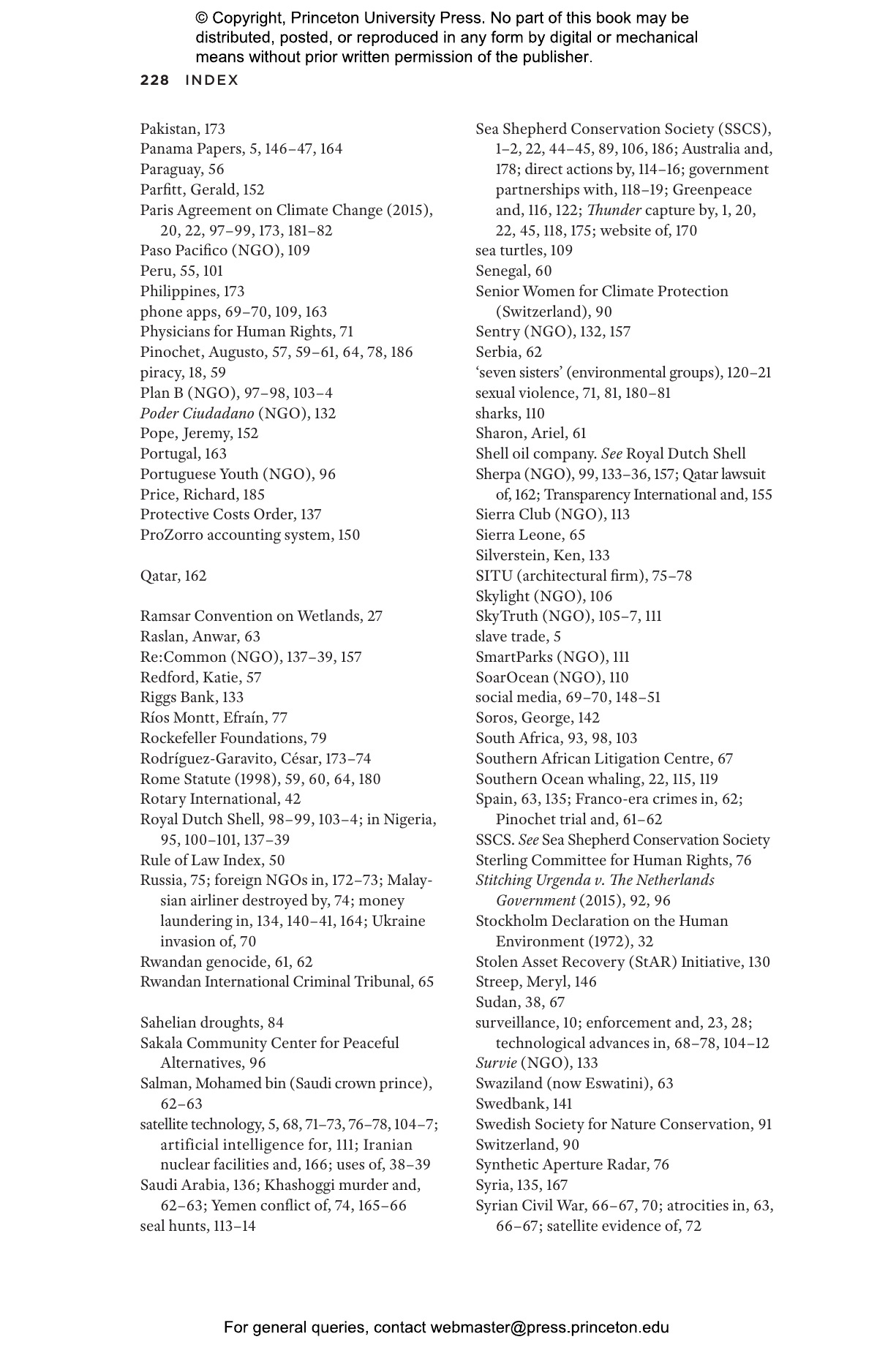 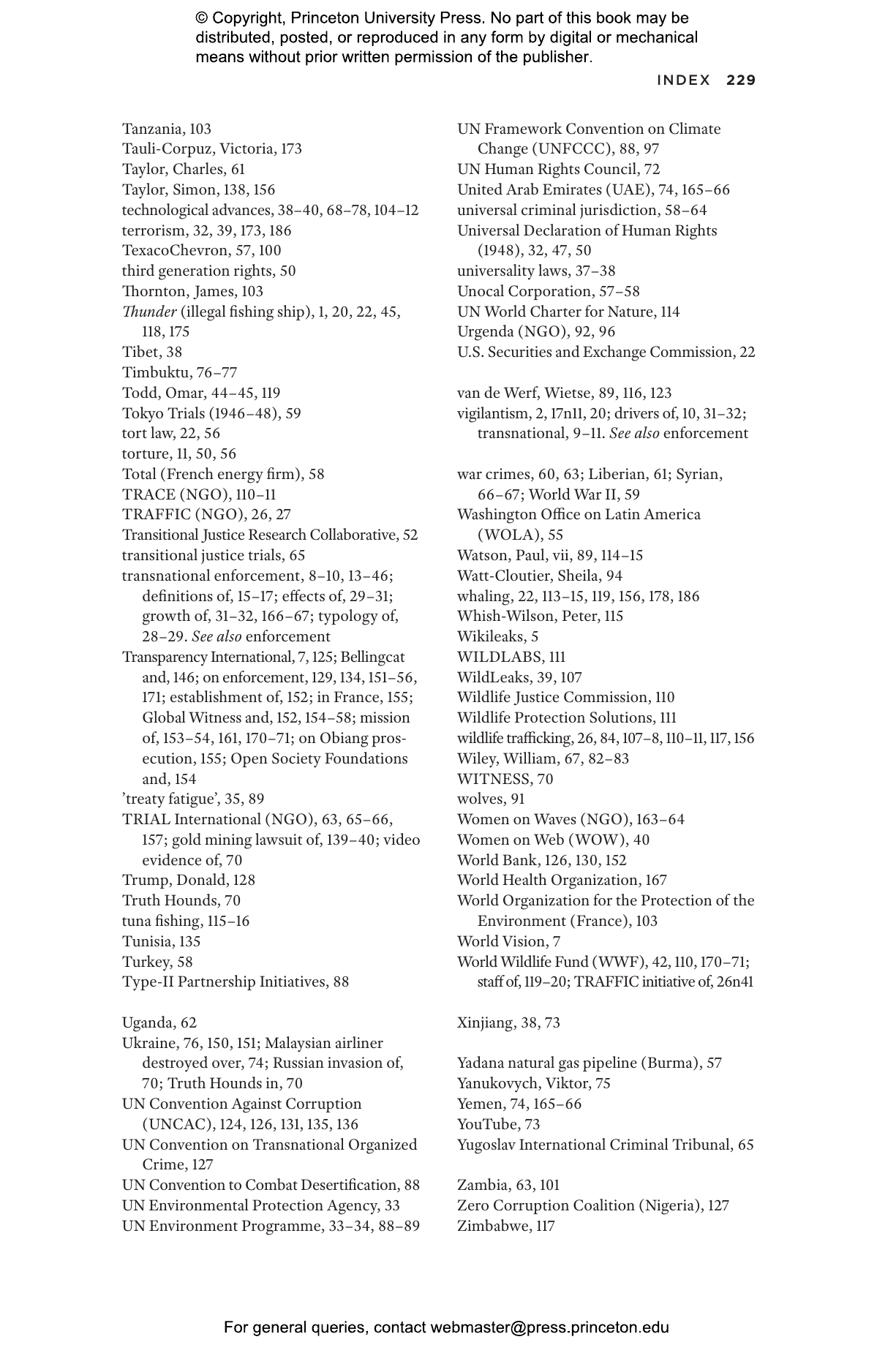 How and why NGOs are increasingly taking independent and direct action in global law enforcement, from human rights to the environment 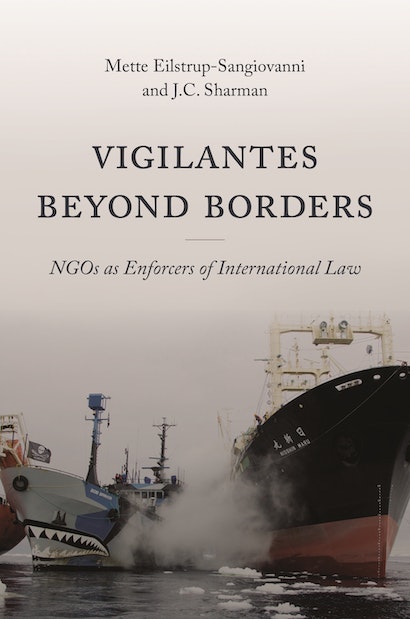 Nongovernmental organizations (NGOs) have generally served as advocates and service providers, leaving enforcement to states. Now, NGOs are increasingly acting as private police, prosecutors, and intelligence agencies in enforcing international law. NGOs today can be found investigating and gathering evidence; suing and prosecuting governments, companies, and individuals; and even catching lawbreakers red-handed. Examining this trend, Vigilantes beyond Borders considers why some transnational groups have opted to become enforcers of international law regarding such issues as human rights, the environment, and corruption, while others have not.

Three factors explain the rise of vigilante enforcement: demand, supply, and competition. Governments commit to more international laws, but do a poor job of policing them, leaving a gap and creating demand. Legal and technological changes make it easier for nonstate actors to supply enforcement, as in the instances of NGOs that have standing to use domestic and international courts, or smaller NGOs that employ satellite imagery, big data analysis, and forensic computing. As the growing number of NGOs vie for limited funding and media attention, smaller, more marginal, groups often adopt radical strategies like enforcement.

Looking at the workings of major organizations, including Amnesty International, Greenpeace, and Transparency International, as well as smaller players, such as Global Witness, the Sea Shepherd Conservation Society, and Bellingcat, Vigilantes beyond Borders explores the causes and consequences of a novel, provocative approach to global governance.

“Vigilantes beyond Borders does more than simply portray Human Rights Watch and other celebrated advocacy and activist organizations as social justice enforcers in the style of Tom Hanks and Clint Eastwood. Eilstrup-Sangiovanni and Sharman show that NGOs must operate in a world of laws and lawlessness, which demands a much more nuanced and complicated form of politics and practice. This book makes an invaluable contribution to our understanding of transnational activism and the world order.”—Michael Barnett, George Washington University

“In this theoretically innovative and impressive book, Eilstrup-Sangiovanni and Sharman shed light on a crucial but understudied aspect of NGO activity. Through careful research and in-depth case studies, Vigilantes beyond Borders adds an important new dimension to our understanding of transnational advocacy networks and the emerging dynamics in global governance.”—Jennifer Hadden, University of Maryland

“This is an important book on an incredibly interesting topic—the role that NGOs play in enforcing international law. It will appeal to a wide audience interested in NGOs in global governance, substantive issues like the environment/human rights/corruption, and broader IR debates such as transnational law.”—Abraham Newman, Georgetown University

“Vigilantes beyond Borders is an excellent book that moves at a brisk pace. It offers a clear and convincing argument about the new role of NGOs as enforcers of international law.”—Leonard Seabrooke, Copenhagen Business School