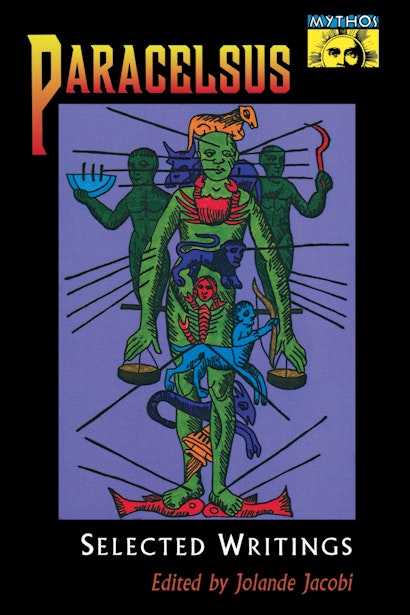 The enigmatic sixteenth-century Swiss physician and natural philosopher Philippus Aureolus Theophrastus Bombastus von Hohenheim, called Paracelsus, is known for the almost superhuman energy with which he produced his innumerable writings, for his remarkable achievements in the development of science, and for his reputation as a visionary (not to mention sorcerer) and alchemist. Little is known of his biography beyond his legendary achievements, and the details of his life have been filled in over the centuries by his admirers. This richly illustrated anthology presents in modernized language a selection of the moral thought of a man who was not only a self-willed genius charged with the dynamism of an impetuous and turbulent age but also in many ways a humble seeker after truth, who deeply influenced C. G. Jung and his followers.

Jolande Jacobi was an analytical psychologist and the author of Complex/Archetype/Symbol in the Psychology of C. G. Jung (Bollingen Series, Princeton).

"The importance of Paracelsus lies in the link which he provides between medieval and scientific thought. Believing in and practicing alchemy, magic, astrology and various divinatory techniques, he was also 'the first modern scientist,' and the 'precursor of microchemistry, antisepsis, modern wound surgery, homeopathy and a number of ultra-modern achievements.' In this readable anthology a full picture of the man and his thought is presented. . . in the form of a cleverly constructed mosaic of direct quotations from the fifteen volumes of his collected works."—The Times Literary Supplement