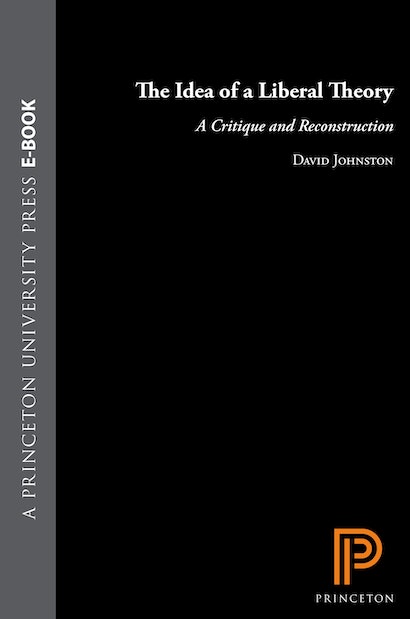 Liberalism, the founding philosophy of many constitutional democracies, has been criticized in recent years from both the left and the right for placing too much faith in individual rights and distributive justice. In this book, David Johnston argues for a reinterpretation of liberal principles he contends will restore liberalism to a position of intellectual leadership from which it can guide political and social reforms. He begins by surveying the three major contemporary schools of liberal political thought — rights-based, perfectionist, and political liberalism — and, by weeding out their weaknesses, sketches a new approach he calls humanist liberalism.

The core of Johnston’s humanist liberalism is the claim that the purpose of political and social arrangements should be to empower individuals to be effective agents. Drawing on and modifying the theories of John Rawls, Michael Walzer, Ronald Dworkin, Joseph Raz, Amartya Sen, and others, Johnston explains how this purpose can be realized in a world in which human beings hold fundamentally different conceptions of the ends of life. His humanist liberalism responds constructively to feminist, neo-Marxist, and other criticisms while remaining faithful to the core values of the liberal tradition.

David Johnston is Associate Professor of Political Science at Columbia University. He is the author of The Rhetoric of "Leviathan": Thomas Hobbes and the Politics of Cultural Transformation (Princeton).

"The sweep of The Idea of Liberal Theory is remarkable. David Johnston does not isolate himself within one vineyard of liberal theory, but seeks to cultivate and amend its diverse fields by praising and criticizing Nozick, Raz, Mill, Rawls, Walzer, and Dworkin, among others. Johnston recasts the normative bases of criticism to address forms of subordination that liberal theory has tended to render invisible."—Melissa A. Orlie, Journal of Politics

"This clear and useful new work moves through a swift yet thorough critique of three leading liberal philosophies to reach a sketch of a new, improved theory."—Virginia Quarterly Review

"Johnston provides a well-argued critique of some representative thinkers from three types of liberal theory: rights-based liberalism; perfectionist liberalism; and political liberalism. . . . The book is exceptionally well-written. . . . Indeed, so clear is the argument that the book is valuable not only for its contribution to academic scholarship but also as a means of introducing liberal political thought to serious undergraduate students."—Choice