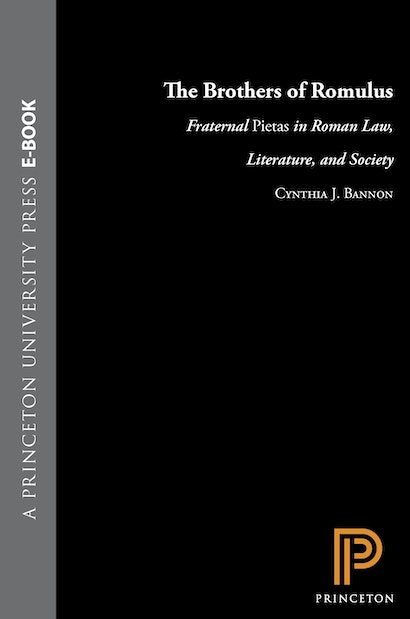 Stories about brothers were central to Romans’ public and poetic myth making, to their experience of family life, and to their ideas about intimacy among men. Through the analysis of literary and legal representations of brothers, Cynthia Bannon attempts to re-create the context and contradictions that shaped Roman ideas about brothers. She draws together expressions of brotherly love and rivalry around an idealized notion of fraternity: fraternal pietas — the traditional Roman virtue that combined affection and duty in kinship. Romans believed that the relationship between brothers was especially close since their natural kinship made them nearly alter egos. Because of this special status, the fraternal relationship became a model for Romans of relationships between friends, lovers, and soldiers.

The fraternal relationship first took shape at home, where inheritance laws and practices fostered cooperation among brothers in managing family property and caring for relatives. Appeals to fraternal pietas in political rhetoric drew a large audience in the forum, because brothers’ devotion symbolized the mos maiorum, the traditional morality that grounded Roman politics and celebrated brothers fighting together on the battlefield. Fraternal pietas and fratricide became powerful metaphors for Romans as they grappled with the experience of recurrent civil war in the late Republic and with the changes brought by empire. Mythological figures like Romulus and Remus epitomized the fraternal symbolism that pervaded Roman society and culture. In The Brothers of Romulus, Bannon combines literary criticism with historical legal analysis for a better understanding of Roman conceptions of brotherhood.

Cynthia J. Bannon is Assistant Professor in the Department of Classical Studies at Indiana University.