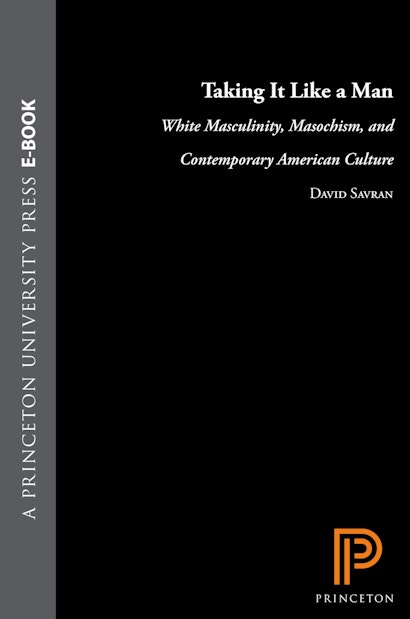 From the Beat poets’ incarnation of the “white Negro” through Iron John and the Men’s Movement to the paranoid masculinity of Timothy McVeigh, white men in this country have increasingly imagined themselves as victims. In Taking It Like a Man, David Savran explores the social and sexual tensions that have helped to produce this phenomenon. Beginning with the 1940s, when many white, middle-class men moved into a rule-bound, corporate culture, Savran sifts through literary, cinematic, and journalistic examples that construct the white man as victimized, feminized, internally divided, and self-destructive. Savran considers how this widely perceived loss of male power has played itself out on both psychoanalytical and political levels as he draws upon various concepts of masochism — the most counterintuitive of the so-called perversions and the one most insistently associated with femininity.

Savran begins with the writings and self-mythologization of Beat writers William Burroughs, Allen Ginsberg, and Jack Kerouac. Although their independent, law-defying lifestyles seemed distinctively and ruggedly masculine, their literary art and personal relations with other men in fact allowed them to take up social and psychic positions associated with women and racial minorities. Arguing that this dissident masculinity has become increasingly central to U.S. culture, Savran analyzes the success of Sam Shepard as both writer and star, as well as the emergence of a new kind of action hero in movies like Rambo and Twister. He contends that with the limited success of the civil rights and women’s movements, white masculinity has been reconfigured to reflect the fantasy that the white male has become the victim of the scant progress made by African Americans and women.

Taking It Like a Man provocatively applies psychoanalysis to history. The willingness to inflict pain upon the self, for example, serves as a measure of men’s attempts to take control of their situations and their ambiguous relationship to women. Discussing S/M and sexual liberation in their historical contexts enables Savran to consider not only the psychological function of masochism but also the broader issues of political and social power as experienced by both men and women.

David Savran has published widely on American theater and culture. His most recent book is Communists, Cowboys, and Queers: The Politics of Masculinity in the Work of Arthur Miller and Tennessee Williams. He is Professor of English at Brown University.

"Taking It Like a Man combines cultural analysis with psychoanalysis to examine masochism and the production of masculinity in the postwar United States—a challenging and provocative strategy that yields exciting, insightful readings of a variety of materials."—Susan Jeffords, University of Washington