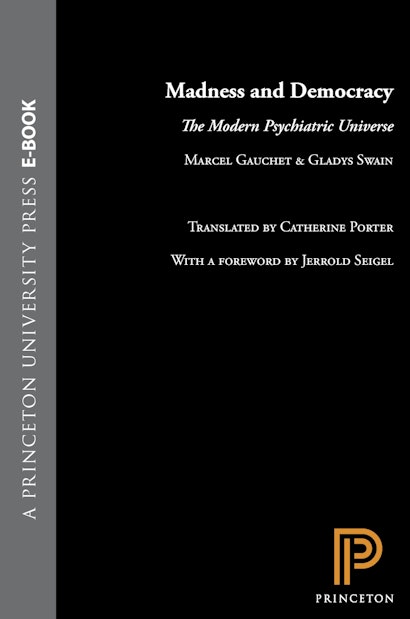 How the insane asylum became a laboratory of democracy is revealed in this provocative look at the treatment of the mentally ill in nineteenth-century France. Political thinkers reasoned that if government was to rest in the hands of individuals, then measures should be taken to understand the deepest reaches of the self, including the state of madness. Marcel Gauchet and Gladys Swain maintain that the asylum originally embodied the revolutionary hope of curing all the insane by saving the glimmer of sanity left in them. Their analysis of why this utopian vision failed ultimately constitutes both a powerful argument for liberalism and a direct challenge to Michel Foucault’s indictment of liberal institutions.

The creation of an artificial environment was meant to encourage the mentally ill to live as social beings, in conditions that resembled as much as possible those prevailing in real life. The asylum was therefore the first instance of a modern utopian community in which a scientifically designed environment was supposed to achieve complete control over the minds of a whole category of human beings. Gauchet and Swain argue that the social domination of the inner self, far from being the hidden truth of emancipation, represented the failure of its overly optimistic beginnings.

Madness and Democracy combines rich details of nineteenth-century asylum life with reflections on the crucial role of subjectivity and difference within modernism. Its final achievement is to show that the lessons learned from the failure of the asylum led to the rise of psychoanalysis, an endeavor focused on individual care and on the cooperation between psychiatrist and patient. By linking the rise of liberalism to a chapter in the history of psychiatry, Gauchet and Swain offer a fascinating reassessment of political modernity.

"[A] new model of the insane . . . prompted the modern understanding of the self. Furthermore, [the authors] contend, the asylum system was structured as an ideal community that crystallized the totalitarian exercise of power in postrevolutionary democratic society. . . . [S]ure to stimulate much theoretical speculation."—Publishers Weekly

"A fertile interpretation of the history of the idea of insanity and of political efforts to cure the insane. . . . As much philosophy and cultural history, this work deserves a thoughtful audience."—Choice