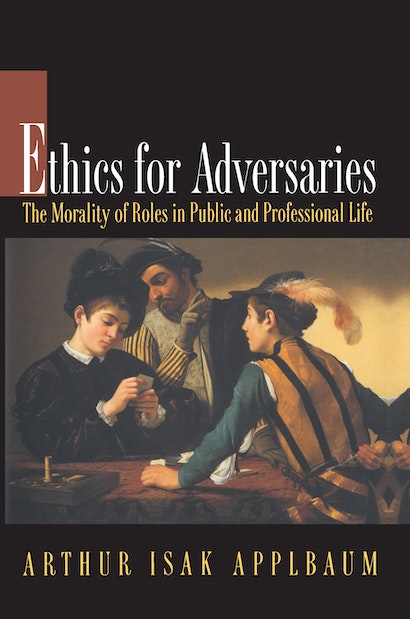 The adversary professions — law, business, and government, among others — typically claim a moral permission to violate persons in ways that, if not for the professional role, would be morally wrong. Lawyers advance bad ends and deceive, business managers exploit and despoil, public officials enforce unjust laws, and doctors keep confidences that, if disclosed, would prevent harm. Ethics for Adversaries is a philosophical inquiry into arguments that are offered to defend seemingly wrongful actions performed by those who occupy what Montaigne called “necessary offices.”


Applbaum begins by examining the career of Charles-Henri Sanson, who is appointed executioner of Paris by Louis XVI and serves the punitive needs of the ancien régime for decades. Come the French Revolution, the King’s Executioner becomes the king’s executioner, and he ministers with professional detachment to each defeated political faction throughout the Terror and its aftermath. By exploring one extraordinary role and the arguments that can be offered in its defense, Applbaum raises unsettling doubts about arguments in defense of less sanguinary professions and their practices.


To justify harmful acts, adversaries appeal to arguments about the rules of the game, fair play, consent, the social construction of actions and actors, good outcomes in equilibrium, and the legitimate authority of institutions. Applbaum concludes that these arguments are weaker than supposed and do not morally justify much of the violation that professionals and public officials inflict. Institutions and the roles they create ordinarily cannot mint moral permissions to do what otherwise would be morally prohibited.

"A masterful, artful book, this set of arguments and persuasive dialogue aims to inquire into, sometimes justify, and limit vicious actions by people in adversarial roles in professional and public life."—Choice

"Ethics for Adversaries is a sustained but reasoned attack on harmful adversarial tactics common in professions, business, and politics. . . . Applbaum's [attack] is systematic and deep. It is systematic because he concentrates on possible justifications for adversariness across the board. . . . It is deep because it develops its arguments from a well-articulated moral framework. . . . Very knowledgeable, well written and argued."—Alan Goldman, Ethics

"This is an important and original contribution to moral philosophy and, in particular, to professional ethics. The argument is rigorous and well developed and the book is written with energy, flair, wit, and grace."—Alan Wertheimer, University of Vermont

"This is a brilliant approach to the vexing questions about ethical requirements of certain leading professions. No serious treatment of these issues will be able to proceed without considering Applbaum's thorough and pointed arguments. This book is, on the one hand, literate, witty and fun to read, and on the other, rigorous, careful, and technical when the argument requires it."—David Estlund, Brown University

"Ethics for Adversaries is a pathbreaking book. With a rare combination of rigorous theory and relevant examples, Arthur Applbaum presents a fair-minded and hard-hitting critique of professional ethics. He dissects the best arguments in favor of relaxing moral standards for lawyers, politicians, and adversaries in competitive practices of all kinds, and perceptively exposes their fundamental flaws."—Amy Gutmann, Princeton University