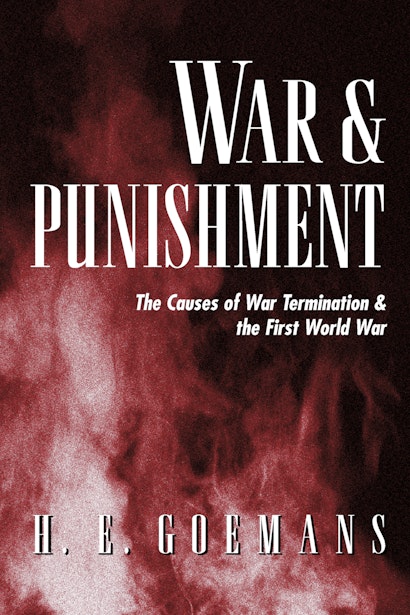 What makes wars drag on and why do they end when they do? Here H. E. Goemans brings theoretical rigor and empirical depth to a long-standing question of securities studies. He explores how various government leaders assess the cost of war in terms of domestic politics and their own postwar fates. Goemans first develops the argument that two sides will wage war until both gain sufficient knowledge of the other’s strengths and weaknesses so as to agree on the probable outcome of continued war. Yet the incentives that motivate leaders to then terminate war, Goemans maintains, can vary greatly depending on the type of government they represent. The author looks at democracies, dictatorships, and mixed regimes and compares the willingness among leaders to back out of wars or risk the costs of continued warfare.


Democracies, according to Goemans, will prefer to withdraw quickly from a war they are not winning in order to appease the populace. Autocracies will do likewise so as not to be overthrown by their internal enemies. Mixed regimes, which are made up of several competing groups and which exclude a substantial proportion of the people from access to power, will likely see little risk in continuing a losing war in the hope of turning the tide. Goemans explores the conditions and the reasoning behind this “gamble for resurrection” as well as other strategies, using rational choice theory, statistical analysis, and detailed case studies of Germany, Britain, France, and Russia during World War I. In so doing, he offers a new perspective of the Great War that integrates domestic politics, international politics, and battlefield developments.

"Goemans makes a significant addition to our understanding of war termination. In addition, the book is so well written that it is a valuable source for readers at all levels."—Choice

"One can disagree with particular interpretations of Goemans, or even question his overall thesis, but it is a thesis that must be taken seriously. Goemans is to be congratulated for producing a book of value to scholars and to policy-makers, given the obvious implications of his findings for strategy."—Richard Ned Lebow, International History Review

"The greatest strength of this book is that it is eminently thought-provoking, and that is praise not lightly given."—Ralph Ashby, The Historian

"War and Punishmentis a refreshing combination of rigorous reasoning and elegant historical analysis on one of the most important, and least understood, aspects of war: what causes wars to end. Anyone interested in the interplay between leadership, domestic politics, and international conflict must read this book. It is a superb and enlightening analysis."—Bruce Bueno de Mesquita, Senior Fellow, Hoover Institution, Stanford University

"A fresh and thought-provoking analysis of why the First World War lasted so long and of what caused it to end. Goemans bridges the gap between international history and security studies, offering challenging conclusions for experts in both disciplines. His book deserves a wide readership."—David Stevenson, Professor of International History, London School of Economics and Political Science

"This may very well be the best book written in the last twenty years by a political scientist on war termination, war aims, and World War I. Goemans presents a formidable challenge to the way that we think about the prosecution of war, war duration, and the links between these and regime type. Not only does the book contain tremendously valuable theoretical insights, but it also provides compelling empirical evidence."—Allan C. Stam, Yale University