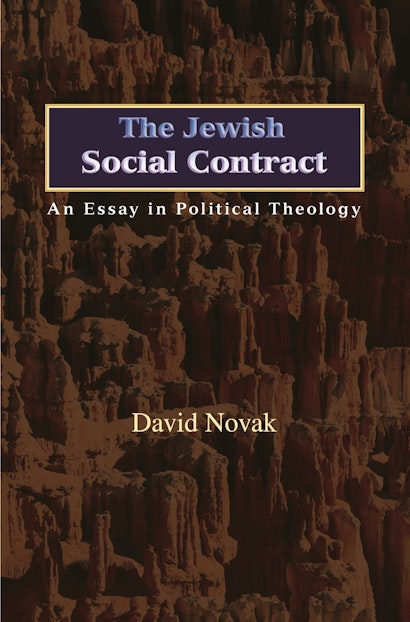 The Jewish Social Contract begins by asking how a traditional Jew can participate politically and socially and in good faith in a modern democratic society, and ends by proposing a broad, inclusive notion of secularity.


David Novak takes issue with the view — held by the late philosopher John Rawls and his followers — that citizens of a liberal state must, in effect, check their religion at the door when discussing politics in a public forum. Novak argues that in a “liberal democratic state, members of faith-based communities — such as tradition-minded Jews and Christians — ought to be able to adhere to the broad political framework wholly in terms of their own religious tradition and convictions, and without setting their religion aside in the public sphere.


Novak shows how social contracts emerged, rooted in biblical notions of covenant, and how they developed in the rabbinic, medieval, and “modern periods. He offers suggestions as to how Jews today can best negotiate the modern social contract while calling upon non-Jewish allies to aid them in the process. The Jewish Social Contract will prove an enlightening and innovative contribution to the ongoing debate about the role of religion in liberal democracies.

David Novak is J. Richard and Dorothy Shiff Professor of Jewish Studies at the University of Toronto. He is the author of eleven books, including Covenantal Rights (Princeton), which won the 2000 American Academy of Religion Award for best book in constructive religious thought.

"In his ambitious new book, The Jewish Social Contract, David Novak restores the nexus between theology and politics implicit in covenantalism and social contract. . . . [The book] provides a rationale for how orthodox religious people might accept the legitimacy of the democratic, delimited secular orders in which they live."—Alan Mittleman, First Things

"David Novak provides a brilliant reconstruction of Jewish legal and political thought from the Bible to Spinoza and Mendelssohn. And this reconstruction is also an argument: that religious Jews (and by extension, religious Christians), if they understand their heritage, will make the best citizens of a pluralist and secular democratic state. At the same time, Novak also argues that ideological secularists do not make good pluralist citizens. Readers who don't agree with that last point will still find this a book with which it is a pleasure to disagree—-and also an education."—Michael Walzer, Institute for Advanced Study