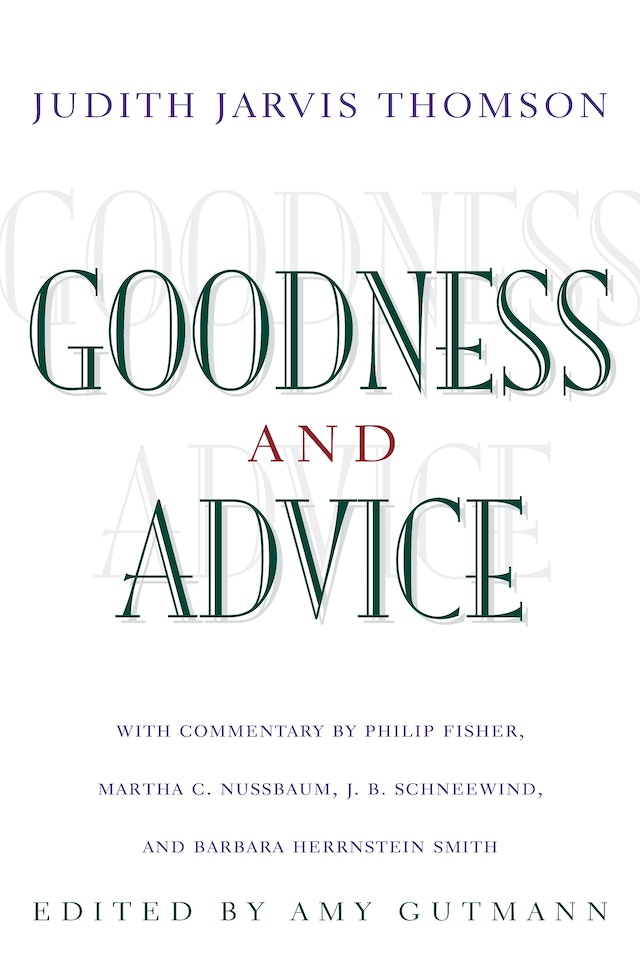 How should we live? What do we owe to other people? In Goodness and Advice, the eminent philosopher Judith Jarvis Thomson explores how we should go about answering such fundamental questions. In doing so, she makes major advances in moral philosophy, pointing to some deep problems for influential moral theories and describing the structure of a new and much more promising theory.


Thomson begins by lamenting the prevalence of the idea that there is an unbridgeable gap between fact and value — that to say something is good, for example, is not to state a fact, but to do something more like expressing an attitude or feeling. She sets out to challenge this view, first by assessing the apparently powerful claims of Consequentialism. Thomson makes the striking argument that this familiar theory must ultimately fail because its basic requirement — that people should act to bring about the “most good” — is meaningless. It rests on an incoherent conception of goodness, and supplies, not mistaken advice, but no advice at all.


Thomson then outlines the theory that she thinks we should opt for instead. This theory says that no acts are, simply, good: an act can at most be good in one or another way — as, for example, good for Smith or for Jones. What we ought to do is, most importantly, to avoid injustice; and whether an act is unjust is a function both of the rights of those affected, including the agent, and of how good or bad the act is for them. The book, which originated in the Tanner lectures that Thomson delivered at Princeton University’s Center for Human Values in 1999, includes two chapters by Thomson (“Goodness” and “Advice”), provocative comments by four prominent scholars — Martha Nussbaum, Jerome Schneewind, Philip Fisher, and Barbara Herrnstein Smith — and replies by Thomson to those comments.

Judith Jarvis Thomson is Professor of Philosophy at Massachusetts Institute of Technology. She is the author of The Realm of Rights; Rights, Restitution, and Risk: Essays in Moral Theory; and Acts and Other Events. She coauthored Moral Relativism and Moral Objectivity and edited On Being and Saying: Essays for Richard Cartwright.

"Contemporary moral philosophy at its best. Thomson's ground plan shows what conditions must be met by any adequate ethical theory. Her arguments are cogent, concise, and uncluttered by literary flourishes."—Mary Mothersill, Columbia University

"The main value of these lectures lies in the way Thomson develops moral theory beyond her earlier publications. Her style has always been quite distinctive, and I find it a pleasure to read."—Gilbert Harman, author of Thought