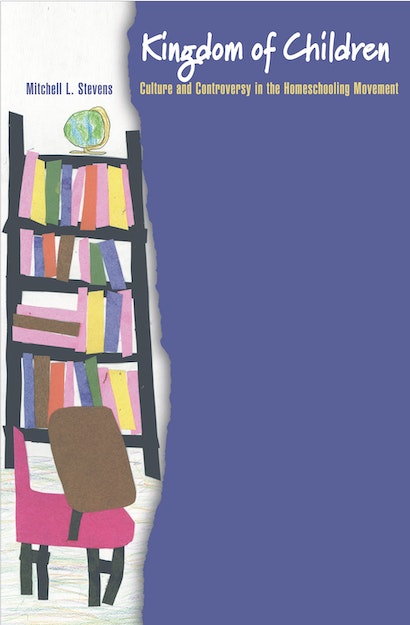 More than one million American children are schooled by their parents. As their ranks grow, home schoolers are making headlines by winning national spelling bees and excelling at elite universities. The few studies conducted suggest that homeschooled children are academically successful and remarkably well socialized. Yet we still know little about this alternative to one of society’s most fundamental institutions. Beyond a vague notion of children reading around the kitchen table, we don’t know what home schooling looks like from the inside.


Sociologist Mitchell Stevens goes behind the scenes of the homeschool movement and into the homes and meetings of home schoolers. What he finds are two very different kinds of home education — one rooted in the liberal alternative school movement of the 1960s and 1970s and one stemming from the Christian day school movement of the same era. Stevens explains how this dual history shapes the meaning and practice of home schooling today. In the process, he introduces us to an unlikely mix of parents (including fundamentalist Protestants, pagans, naturalists, and educational radicals) and notes the core values on which they agree: the sanctity of childhood and the primacy of family in the face of a highly competitive, bureaucratized society.

Kingdom of Children aptly places home schoolers within longer traditions of American social activism. It reveals that home schooling is not a random collection of individuals but an elaborate social movement with its own celebrities, networks, and characteristic lifeways. Stevens shows how home schoolers have built their philosophical and religious convictions into the practical structure of the cause, and documents the political consequences of their success at doing so.


Ultimately, the history of home schooling serves as a parable about the organizational strategies of the progressive left and the religious right since the 1960s.Kingdom of Children shows what happens when progressive ideals meet conventional politics, demonstrates the extraordinary political capacity of conservative Protestantism, and explains the subtle ways in which cultural sensibility shapes social movement outcomes more generally.

"Stevens spent ten years interviewing home-schooling families, watching them teach, pitching tents at their summer camps, hanging out at their conferences, and reading their publications. He has written a careful, intelligent book"—Margaret Talbot, Atlantic Monthly

"In the press and on television, home-schoolers are portrayed mainly as white Americans of strong Christian background, most of whom are right-wing fundamentalists. Stevens's study confirms this generic picture, yet his study helps us go beyond it. . . [T]he intellectual origins of home-schooling are surprisingly nonsectarian."—Howard Gardner, New York Review of Books

"Kingdom of Children is about the grown-ups behind the not-so peaceful movement. . . . As Stevens makes clear, those drawn to home schooling tend to be a stronger-willed, contentious lot, and removing them from the public school system doesn't make them less so."—Rebecca Jones, American School Board Journal

"For anyone interested in home schooling, this is the book to read."—Choice

"This book is extremely well written and thought provoking.... Kingdom of Children will no doubt play an important role in the much-needed sociological dialogue surrounding home schooling."—Ed Collom, American Journal of Sociology

"This is a definitive study. For anyone interested in home schooling, this is the book to read. It musters an impressive array of evidence to explain why parents decide to home school their children, and it carefully considers the consequences of home schooling for these children. In the process, the book dispels many of the criticisms that have emerged around the homeschooling movement. Read sympathetically, the book also poses a significant challenge to the educational philosophies still present in most of the nation's public schools."—Robert Wuthnow, Princeton University

"Kingdom of Children offers a rich study of the homeschooling movement. It makes important contributions both to research on education and to the study of social movements. The book's engaging and elegant style makes it accessible to general readers and students. . . . Firmly grounded in rich ethnography and interviews, Kingdom of Children provides a compelling introduction to the beliefs that increasingly animate public discussion and an exemplary case study of an effort to enact this alternative vision of education and family."—Elisabeth Clemens, University of Arizona