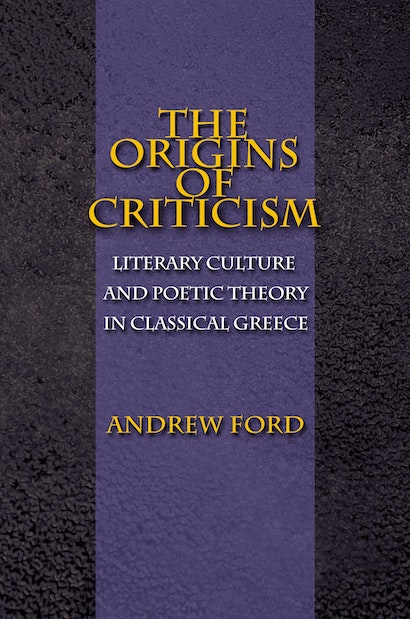 By “literary criticism” we usually mean a self-conscious act involving the technical and aesthetic appraisal, by individuals, of autonomous works of art. Aristotle and Plato come to mind. The word “social” does not. Yet, as this book shows, it should — if, that is, we wish to understand where literary criticism as we think of it today came from. Andrew Ford offers a new understanding of the development of criticism, demonstrating that its roots stretch back long before the sophists to public commentary on the performance of songs and poems in the preliterary era of ancient Greece. He pinpoints when and how, later in the Greek tradition than is usually assumed, poetry was studied as a discipline with its own principles and methods.

The Origins of Criticism complements the usual, history-of-ideas approach to the topic precisely by treating criticism as a social as well as a theoretical activity. With unprecedented and penetrating detail, Ford considers varying scholarly interpretations of the key texts discussed. Examining Greek discussions of poetry from the late sixth century B.C. through the rise of poetics in the late fourth, he asks when we first can recognize anything like the modern notions of literature as imaginative writing and of literary criticism as a special knowledge of such writing.


Serving as a monumental preface to Aristotle’s Poetics, this book allows readers to discern the emergence, within the manifold activities that might be called criticism, of the historically specific discourse on poetry that has shaped subsequent Western approaches to literature.

Andrew Ford is Professor of Classics at Princeton University. He is the author of Homer: The Poetry of the Past and of numerous articles on Greek literature and literary history.

"Andrew Ford has written lively and sophisticated account of the evolution of criticism as an autonomous activity, and illuminated the origins of the modern-day equivalent of those antique experts in literature—the professional academic. . . . [W]hat distinguishes Ford's work from previous studies is the breadth of his scholarship, the detail of his analysis, and above all his historicist approach."—Penelope Murray, Times Literary Supplement

"Andrew Ford has taken on the enormous task of tracing the historical background of critical language and the establishment of criticism as a distinct discilpine. He has executed this task with precision, poignancy, and insightful erudition. . . . [T]his eloquent book will be an instant complement to any study of the history of criticism."—Eustratios Papaioannou, Bryn Mawr Classical Review

"Ford collects in this volume much useful information about classica literary criticism from Homer to Aristotle. . . . [An] important volume."—Choice

"This is an original, ambitious book on an important theme. Earlier scholars have adumbrated in one way another its major theses—but never have these been argued with so much care, thoroughness, or bibliographical completeness. Ford's synthesis is an impressive one that merits close attention from every scholar interested in the history of the Western literary tradition."—Thomas Cole, Yale University

"The topic is right at the cutting edge of contemporary concerns and will be of wide interest not only to classicists but also to cultural theorists and literary critics. Ford's argument constitutes a substantial reevaluation of the development of criticism and (more particularly) a significant reframing of the contributions of Plato and Aristotle. The whole book is very well written: clear, punchy, and convincingly handled. It will be widely discussed."—Simon Goldhill, University of Cambridge