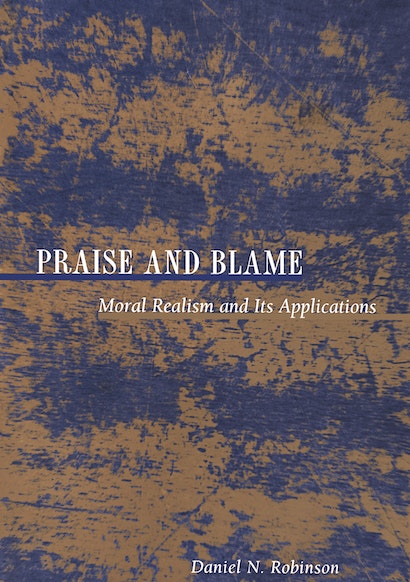 How should a prize be awarded after a horse race? Should it go to the best rider, the best person, or the one who finishes first? To what extent are bystanders blameworthy when they do nothing to prevent harm? Are there any objective standards of moral responsibility with which to address such perennial questions? In this fluidly written and lively book, Daniel Robinson takes on the prodigious task of setting forth the contours of praise and blame. He does so by mounting an important and provocative new defense of a radical theory of moral realism and offering a critical appraisal of prevailing alternatives such as determinism and behaviorism and of their conceptual shortcomings.


The version of moral realism that arises from Robinson’s penetrating inquiry — an inquiry steeped in Aristotelian ethics but deeply informed by modern scientific knowledge of human cognition — is independent of cognition and emotion. At the same time, Robinson carefully explores how such human attributes succeed or fail in comprehending real moral properties. Through brilliant analyses of constitutional and moral luck, of biosocial and genetic versions of psychological determinism, and of relativistic-anthropological accounts of variations in moral precepts, he concludes that none of these conceptions accounts either for the nature of moral properties or the basis upon which they could be known. Ultimately, the theory that Robinson develops preserves moral properties even while acknowledging the conditions that undermine the powers of human will.

Daniel N. Robinson is Distinguished Research Professor Emeritus, Georgetown University. He is Faculty Fellow in Philosophy at Oxford University where he has lectured annually since 1991. He is the author or editor of numerous books including Wild Beasts and Idle Humors: The Insanity Defense from Antiquity to the Present and Aristotle's Psychology.

"The richness of this work cannot be comprehended in one reading. Whether the reader agrees or not with the author, one has much to learn from the profundity of Robinson's insight into the framing of moral judgment. The reader comes away feeling that this book is a prolegomenon to an expanded version of one or more themes treated within these pages."—Jude P. Dougherty, Review of Metaphysics

"This book is a significant contribution to the analytic study of ethics, to the history of ethics, and to the growing field of philosophical psychology. It also offers a hope of common ground between those who study ethics in the analytic way and those who approach it in a way that makes contact with traditional metaphysical outlooks such as that of Aristotle. All serious writers in ethics will want to test their own views in the light of what Robinson has to say. The book should be in all college and university libraries; but it is, I think, so well written that it will attract many nonacademic readers who are interested in ethics. Robinson's prose is correct, clear, supple, elegant, and witty; if only all philosophers could write as well as this unusual psychologist/philosopher/classicist!"—Edward Pols, Bowdoin College

"Praise and Blame is a terrific book that will be read with pleasure and profit by scholars in ethics, political theory, law, and related fields. It will appeal both to specialists and to sophisticated nonspecialists. People who are looking for an original take on perennial philosophical questions won't be disappointed. At the same time, readers who are interested in learning what the best classical and contemporary thinkers have had to say about the freedom of the will and its relationship to the moral evaluation of human conduct will find the book more than instructive."—Robert P. George, Princeton University