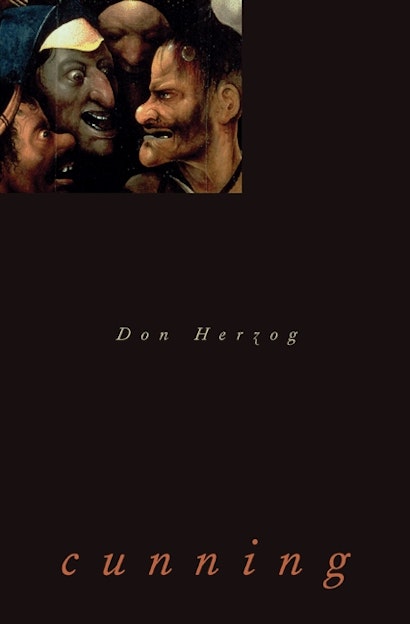 Want to be cunning? You might wish you were more clever, more flexible, able to cut a few corners without getting caught, to dive now and again into iniquity and surface clutching a prize. You might want to roll your eyes at those slaves of duty who play by the rules. Or you might think there’s something sleazy about that stance, even if it does seem to pay off. Does that make you a chump?


The book is in three parts, bookended by two murderous churchmen. “Dilemmas” explores some canonical moments of cunning and introduces the distinction between knaves and fools as a “time-honored but radically deficient scheme.” “Appearances” assails conventional approaches to unmasking. Surveying ignorance and self-deception, “Despair?” deepens the case that we ought to be cunning — and then sees what we might say in response.


Throughout this beguiling book, Herzog refines our sense of what’s troubling in this terrain. He shows that rationality, social roles, and morality are tangled together — and trickier than we thought.

Don Herzog is Edson R. Sunderland Professor of Law at the University of Michigan. He is the author of Without Foundations, Happy Slaves, and Poisoning the Minds of the Lower Orders (Princeton).

"[In] his sparkling new book . . . Don Herzog doesn't say his subject changed the world, though it would be hard to imagine the world without it. He lets cunning lead us toward a broadened idea of human behavior."—Robert Fulford, National Post

"In Cunning, Mr. Herzog's playful and wide-ranging new book, he meditates on the tricks played by Henry Tufts, Odysseus, and used-car salesmen, among many others. Acts of cunning, Mr. Herzog says, can teach us about social roles, the limits of rationality, and the contradictions the lie within utilitarian and Kantian moral arguments."—David Glenn, Chronicle of Higher Education

"This pleasingly original little volume is bookended by two tales of murderous priests. . . . In prose that conveys a deliciously convivial murmur (the author is a law professor who hates most academic writing), Herzog proceeds to discuss Odysseus, Machiavelli, car salesmen and confidence tricksters, believers in angels, astrology and demons, jazz musicians and pirates, both eliciting out sympathy for the variety of human moral life and refusing the paranoiac conclusion that all around us are knaves. Very cunning indeed.""—Steven Poole, The Guardian

"At the start of this extraordinary book we are invited to view cunning as a nobody, and nobody as cunning. By its conclusion, we are left to struggle with the thought that cunning is everybody, and that everybody is cunning. Like Odysseus himself, the reader who undertakes this labyrinthine journey will have many tales to tell, and will be very much the wiser for it."—John C. P. Goldberg, Michigan Law Review

"This study is highly original, deeply researched, and lucidly written, providing pioneering work on the history of sexuality in twentieth-century Germany and challenging and reshaping the extensive scholarship on memory and the Holocaust. . . . By focusing on a subject seemingly far removed from Nazism, Herzog shows how pervasive debates about the Nazi past were and how complex and contradictory the attitudes of even committed antifascists were."—Mary Nolan, The Historian

"Cunning is a remarkable book. . . . It is both a pleasure and difficult to read. It is a pleasure because it is so clever and erudite, so provocative and original, and because I have learned much from it and agree with much of it. It is difficult to read because the book's 'message' is so deflationary, because the playfulness edges toward self-display, and because it is hard to trust it. Of course, this is Herzog's point, which means that my attitude and reservations are precisely what Cunning aimed to cultivate."—J. Peter Euben, Duke University, Durham, NC

"This book evinces on every page its author's extraordinary erudition and range. Captivating and pleasurable, it is a repository of example after example, story after story, anecdote after anecdote of 'cunning' behavior. Herzog is familiar with ancient literature, seldom-read eighteenth-century playwrights and novelists, Tammy Faye Bakker, nineteenth-century advertisements, seventeenth-century astrology, the letters of Dashiell Hammett, student answers to nineteenth-century school examinations, detective fiction, research about Tupperware—and that's mainly from the second chapter alone."—Patrick Deneen, Georgetown University, author of Democratic Faith

"An impressive piece of work. Herzog nails his target of instrumental rationality head-on. In form the book is innovative, even daring. It is one of those rare works in political theory with a clear claim to originality of conception as well as purpose. It also breaks through the field's conventional boundaries by engaging modes of reasoning, questions of affect, and problems of ethics and judgment that, for the past decade or so, have found considerable uptake in philosophy, law, literary studies, and history."—Kirstie McClure, University of California, Los Angeles, author of Judging Rights